A former Riverdale actor who admitted to killing his mother to spare her from witnessing his plot to assassinate Canadian Prime Minister Justin Trudeau has been sentenced to life in prison.

Ryan Grantham, 24, will be unable to apply for parole for 14 years after pleading guilty to second-degree murder charges for fatally shooting his 64-year-old mother, Barbara Waite, while she was playing the piano in March 2020.

He then drove to Trudeau’s apartment in his car with three guns, ammunition and 12 Molotov cocktails before deciding to turn himself in to authorities.

Under Canadian law, a charge of second-degree murder carries an automatic life sentence – and the only thing his lawyers could dispute was how long he would have to serve before he could be granted parole.

They argued back in June that Grantham should be eligible for parole after 12 years because he had admitted his guilt and expressed sorrow at his actions, while the federal government argued he would have to serve 17 to 18 years before he became eligible .

But on Wednesday, CBC reports, British Columbia Superior Court Justice Kathleen Ker ruled he only needs to serve 14 years, as she saw the actor’s downward spiral in the months leading up to the murder as a mitigating factor.

She noted that Grantham appeared genuinely remorseful in his apology and sought psychiatric help in prison, where he received positive reviews of his behavior and progress.

Ker also called it a “saving grace” that Grantham had enough touch with reality and understanding to decide not to commit mass murder or assassinate the prime minister. 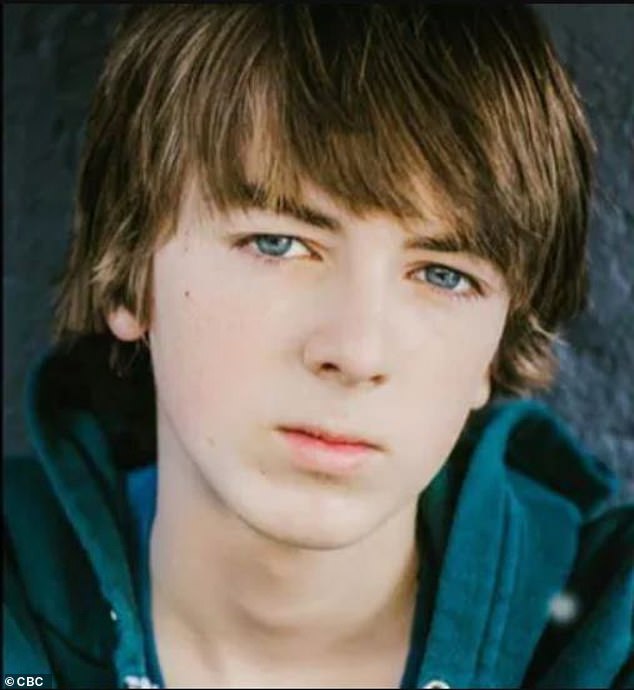 Ryan Grantham, 24, was sentenced to life in prison with no possibility of parole for 14 years

He had pleaded guilty to a second-degree murder charge for killing his mother, 64-year-old Barbara Waite (pictured), while she was playing the piano on March 31, 2020

Prosecutors revealed in June that after shooting Waite in the back of the head while he was playing the piano on March 31, 2020, Grantham recorded video on a GoPro in which he confessed to the murder and showed his mother’s lifeless body.

“I shot her in the back of the head,” he reportedly said on the tape. “In the moments after, she would have known it was me.”

The actor then bought beer and weed, experimented with making Molotov cocktails and watched Netflix before covering his mother’s body with a sheet and going to bed.

The next morning, Grantham told authorities, he hung a rosary on Waite’s piano and arranged lighted candles around her body before loading his car with three guns, ammunition, a dozen Molotov cocktails, camping gear and directions to Trudeau’s Rideau Cottage in Ottawa .

He had planned to travel more than 50 hours to kill Trudeau before changing his mind and considering committing “an act of mass violence” at Simon Fraser University, which he had dropped out.

He contacted Vancouver Police before harming anyone else and pleaded guilty to second-degree murder in March.

Ryan Grantham is a Canadian actor from Squamish, British Columbia.

He began his acting career at the age of 9 and started out in smaller roles before appearing in The Nutcracker.

One of his bigger roles as a kid was in an episode of Supernatural where he gains super strength and starts attacking his bullies.

He then took on roles in the films Diary of a Wimpy Kid and The Imaginarium of Doctor Parnassus.

Grantham also had teenage roles on the CW’s IZombie before landing the role of a lifetime as a character on Riverdale.

He admitted to killing his mother on March 31, 2020, with prosecutors saying he wanted to protect her from witnessing his assassination attempt on Prime Minister Justin Trudeau.

Prosecutors later said Grantham fatally shot his mother “to save her” before she witnessed his assassination plot against Canada’s prime minister unfold.

They produced two psychiatric reports which concluded that Grantham committed the crime to spare her mother from witnessing further acts of violence he planned to commit.

The assessments concluded that months before the killing, Grantham presented with cannabis use disorders, depression, self-loathing, and suicidal and homicidal tendencies.

Prosecutors pointed to a March diary entry in which Grantham wrote, “I’m so sorry mum, I’m so sorry Lisa… I hate myself.

“There’s a lot of media of mine out there…film and television…hundreds of hours of mine that can be viewed and dissected…nobody’s going to understand.”

‘Mister. Grantham was trying to save his mother from something he was planning to do,” prosecutor Michaela Donnelly said during the June sentencing hearing.

She described the murder as a “heartbreaking breach of trust”.

“Barbara Waite loved her son very much, was an excellent mother and, in her opinion, had no reason to fear him,” she said.

Donnelly added that Grantham had many opportunities to change his mind.

Apparently he loaded and unloaded his gun multiple times on the day of the murder and sat on the steps of his townhouse for nearly 15 minutes pondering what to do – before finally turning and shooting his mother.

According to CBC, Grantham reportedly feared that Waite would find out he had stopped taking classes at Simon Fraser University and abusing marijuana.

Grantham is best known for playing Jeffery Augustine on Riverdale. His character was written into the show as the hit-and-run killer of Luke Perry’s character after Perry died of a stroke

He also had roles on the TV show Supernatural (pictured)

Waite’s body was found on April 1, 2020 by her daughter Lisa, who arrived after Waite failed to return her calls and texts.

“How can I trust anyone when my only sister chose to execute my mother when her back was turned,” Lisa Grantham told the court.

But Grantham expressed his sadness back in court in June.

“I can neither explain nor justify my actions. I have no excuse,” he said at the time.

“It hurts me to think how much I’ve wasted my life.

“In the face of something so horrific, it seems so pointless to apologize,” he added. “But I’m sorry from every fiber of my being.”

Grantham is best known for playing Jeffery Augustine on Riverdale. His character was written into the show as the hit-and-run killer of Luke Perry’s character after Perry died of a stroke.

He has also had roles in the television series Supernatural, as well as in the films Diary of a Wimpy Kid and The Imaginarium of Doctor Parnassus.

https://www.dailymail.co.uk/news/article-11241267/Riverdale-star-Ryan-Grantham-jailed-LIFE-shooting-mom-head.html?ns_mchannel=rss&ns_campaign=1490&ito=1490 Riverdale star Ryan Grantham has been sentenced to life in prison for shooting his mother in the back of the head