The Russian government placed a permanent ban on 25 more Americans on Monday, including actors Ben Stiller and Sean Penn.

Moscow’s foreign ministry said the sanctions were in response to “ever-growing personal sanctions” imposed by Washington.

The statement did not provide additional details about why or how the sanctioned Americans were selected.

The United States has sanctioned scores of Russian officials and Kremlin-linked elites since leader Vladimir Putin ordered a brutal and unprovoked invasion of Ukraine on February 24.

Actors Penn and Stiller have both visited Kyiv and met with Ukrainian President Volodymyr Zelenskyy as Hollywood’s most outspoken critics of the Russian attack. 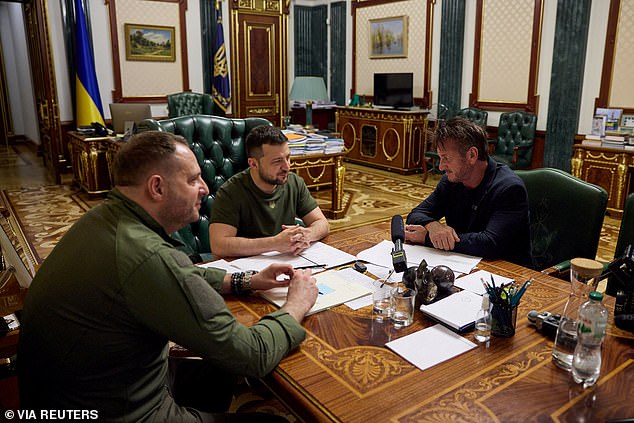 Democratic Senator Kyrsten Sinema (pictured August 6, 2022) is among a handful of U.S. senators sanctioned by Russia on Monday

Penn, known for his global activism work alongside his Hollywood films, had been in Ukraine since the invasion began to film a documentary about the bloody attack and had returned several times since.

Stiller is a goodwill ambassador for the United Nations refugee agency. The ‘Zoolander’ star visited Ukraine at the end of June and called Zelensky his ‘hero’.

US sanctions against Russian companies and individuals, right down to Putin himself and his top lieutenants.

For its part, Russia has imposed sanctions on President Joe Biden and his family, several TV news anchors, political analysts and other notable figures.

Kabaeva, the head of a pro-Putin media group and once a celebrated gymnast, was among several Kremlin-linked elites sanctioned by the Treasury Department after the Russian invasion passed the six-month mark.