The newly elected governor appeared Sunday to discuss her immediate plans for her state, but talks quickly turned to a year’s presidential election.

“I love the President, have a great relationship with him. I know our country would be infinitely better off if he were in office now instead of Joe Biden, but right now my focus isn’t on 2024,” Sanders told moderator Shannon Bream.

Sunday’s appearance by Sanders, who served as White House press secretary under former President Donald Trump, was the first since she was sworn in last week. 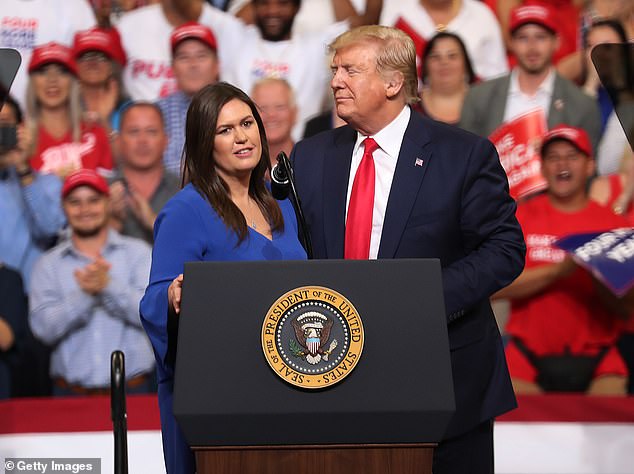 Arkansas Gov. Sarah Huckabee Sanders said her “focus is not on 2024” as she pressed whether she supports her old boss, former President Donald Trump

The governor’s interview comes as she was making big headlines for banning the term “LatinX” from state documents and her ban on critical race theory.

While explaining why she tiptoed in support of her former boss, saying her focus is making promises to Arkansas residents.

“I’m not really focused on that at all, but on what we can do to make change happen and fulfill the promises we made during the campaign season here in Arkansas,” Sanders said.

The Fox anchor went ahead and asked her what exactly she was waiting for.

“What kind of schedule would you have to make a decision?” asked Bream. “Would you like to see who else is in the primary? Will you wait for the candidate?’

Sanders doubled down, explaining, “My focus isn’t on 2024. It’s on what we can deliver in this legislature. I will not set an arbitrary schedule. I don’t really focus on that at all.”

The newly elected governor said her focus is “on what we can deliver in this legislature.”

Sanders refused to take the bait, stating several times that she was focused on her role as governor

“That’s the only thing that our team, and that’s focused on, is delivering what we set out to do,” Sanders said

Despite the repeated dodging, the Fox host is making yet another attempt to get the Republican to comment on the future of the White House.

“You have just been sworn in. Are you already feeling the pressure of future speculation?” asks the Fox host.

“I feel the pressure to hold this legislature,” the governor replies.

“That’s the only thing our team, and my focus on, is delivering what we set out to do,” Sanders continues.

Sanders served as a press secretary during the Trump administration

Sanders was sworn in Tuesday

The former White House staffer wasted no time, either.

In her first few days in office, Sanders acted quickly to fulfill campaign promises she’d made over the past two years.

After she was elected to office in November, former President Trump congratulated her, saying she was an “amazing person and is going to be a really incredible governor.”

The term is used in a non-gendered manner to describe a person of Hispanic descent, possibly someone whose gender you may or may not be aware of is non-binary.

“I’m incredibly excited about what I think we have ahead of us and that’s the only thing I’m focused on at the moment,” Sanders told Bream Sunday.

Earlier this week, Arkansas’ first female governor also announced that she would ban critical race theory in the state’s schools.

“Under my leadership, schools will teach literacy, math and science—and our children will learn that the identity that really matters is the one we all share: our identity as children of God and citizens of the United States of America ,” she said at the time.

“Teachers and school administrators should teach students how to think — not what to think,” the governor said Tuesday.

Critical race theory focuses on the idea that race is a social construct and that racism is embedded in legal systems and policies, not just the actions of individuals.

Since taking office, the governor has been quick to move against “revival” policies

“It’s disgusting that they did that, and they want to make it harder for kids to understand our history,” said researcher and educator Chenoa Summers, who spoke with KAIT 8 in Jonesboro, Arkansas.

“You act like racism doesn’t exist,” said one parent. “I really think that’s the basis for taking away critical race theory because you want to make it seem like it doesn’t exist.”

Others in the state, which Sanders won with 63 percent of the vote, have applauded her quick work to ban the controversial practice.

“She’s my type. I didn’t hesitate to snap things that urgently needed to be cleaned up immediately,” said one YouTube commenter.

“Glad I contributed to your campaign, keep up the good work,” wrote another on Twitter.

https://www.dailymail.co.uk/news/article-11637915/Sarah-Huckabee-Sanders-refuses-endorse-Trump-president-focus-isnt-2024.html?ns_mchannel=rss&ns_campaign=1490&ito=1490 Sarah Huckabee Sanders Refuses to Back Trump for President: ‘My Focus Isn’t on 2024’