The science museum has taken down a trans-inclusive display featuring a fake penis and breast-binding equipment after complaints were made about its contents.

The Sex and Gender Gallery describes the transition from the “wrong body” as a “hero’s journey” and gender characteristics as “difficult to define” and not always consistent with “your biological sex”.

It also included quotes from a transgender person who described being “born in the wrong body” – a concept that trans groups are increasingly distancing themselves from.

Several museum visitors, including Baroness Nicholson of Winterbourne, blamed the boy or the girl? Characteristic of peddling “propaganda” about biology, reports the Telegraph. 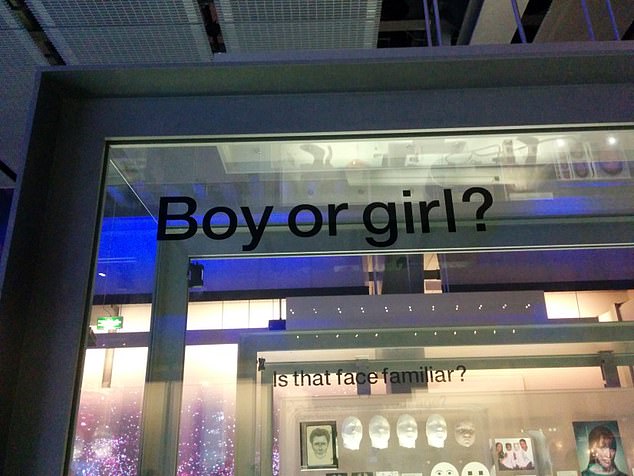 The controversial sex and gender gallery describes transitioning from the ‘wrong body’ as a ‘hero’s journey’ and gender characteristics as ‘hard to define’ and not always consistent with ‘your biological sex’.

The now-empty display featured a fake penis, a controversial compression vest to flatten the chest, and hormone-inducing testosterone patches.

Baroness Nicholson wrote to the museum’s chairman, Sir Ian Blatchford, asking the boy or the girl? Gallery “promotes societal and medical change in a non-neutral way.”

The exhibit also includes an information board stating that gender is “harder to define” than gender.

It continues: “Your gender identity is how you feel about yourself as male or female, or for some people neither, or both. It may not match your biological sex.’

Quotations from a transgender person named “Alex” who described being “born in the wrong body” were also included in the cabinet.

Millions of people visit the free science museum every year, many of them visiting school children for educational tours.

In a 2016 blog post, Alex Tyrrell, former director of exhibitions and programs, responded to an online row over the controversial Boy Or Girl? Advertisement.

“The thought behind Who am I? – and in particular gender and gender representation – should communicate the latest research clearly and accurately, but we also believe that presenting contributions from other perspectives and disciplines is important when examining such a complex and deeply personal question,” wrote he.

“The idea Who am I? was always to raise questions. We present topics in a way that provokes discussion, but never wants to compromise the accuracy of the content displayed.’

Several museum visitors, including Baroness Nicholson of Winterbourne, blamed the boy or the girl? Feature of peddling “propaganda” about biology

Scientists were also puzzled by a “Sex-O-Meter” included in the exhibit that could apparently show whether a person’s brain is male or female.

Researchers questioned its scientific value, while others took to social media to criticize its “antiquated gender stereotypes.”

dr Joseph Devlin, head of experimental psychology at University College London, told CNN he was “surprised” by the exhibition.

He said: “The Science Museum has an impressive track record and I really respect their work in science communication. This particular exhibit is not at all representative of the work they are doing.’