A Scottish aristocrat with a passion for surfing was tragically found dead at the foot of a cliff on Saturday night.

Alexander Sutherland, Lord Strathnaver, 40, was found at the foot of 30ft cliffs in Thurso East, near the ruined 19th-century Thurso Castle in Caithness.

Thurso Lifeboat reported that a rescue vessel was launched at 11.30pm after a person was reported on the rocks.

“The lifeboat quickly made its way to the area and crew members trained by Accident Management went ashore in the inflatable Y-boat. They located the casualty and provided CPR and assisted the Scottish Ambulance Service and local coastguard in dealing with the situation until Scottish Police took control,” said a spokesman for the lifeboat group.

Lord Strathnaver, who would have celebrated his 41st birthday next month, was the only son of Alistair Sutherland, 25th Earl of Sutherland – who ascended the title in 2019.

The family had already suffered tragedy when Lord Strathnaver’s cousin Jamie Janson, 44 – the son of Earl Martin’s twin brother and a grandnephew of scandal-hit Conservative Minister John Profumo – took his own life in 2019.

A keen surfer, Lord Strathnaver was a well-known “tube rider” who had traveled to Indonesia and other exotic locations to battle epic waves, and was an ambassador for surf brand Luna Surf. 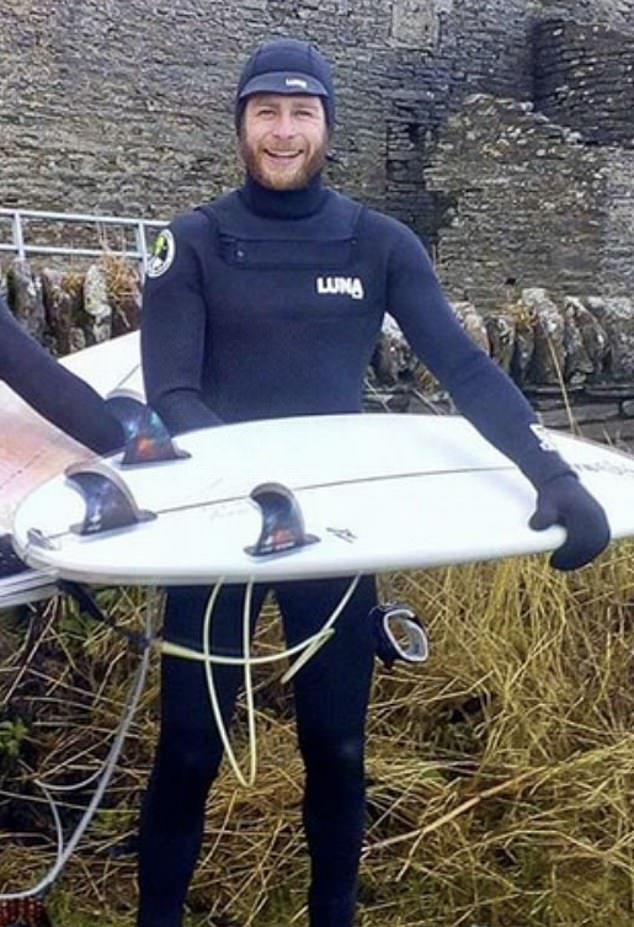 Alexander Sutherland, 40, who inherited the title of Lord Strathnaver when his grandmother Elizabeth, 24th Countess of Sutherland, died in 2019 aged 98, was a keen surfer and heir to the county of Sutherland.

Lord Strathnaver was found at the foot of 30ft cliffs at Thurso East near the ruined 19th century Thurso Castle in Caithness (pictured).

A friend said Lord Strathnaver attended the Tunes in the Dunes music festival in Dunnet – the most northerly point of mainland Britain – over the weekend.

A keen surfer, he also had a house a few miles away in Thurso East, one of the UK’s top surfing spots.

“Unfortunately, Al could not be saved. He was such a lovely guy – a really happy, happy person. He had no airs. I didn’t know him as Lord Strathnaver – neither did Al.

“He was a keen surfer – he surfed every day and that’s why he had a house in Thurso East. He also had a small surf shop. Apparently he had been to the music festival, had left and was possibly on his way back. It’s such a tragic loss.’

His grandmother, the Elizabeth, 24th Countess of Sutherland, died in 2019 aged 98.

The Countess’ death meant that her eldest son, Alistair, became Earl of Sutherland – he inherited the 120,000-acre estate of Dunrobin Castle in Sutherland – and his son Alexander assumed the title of Lord Strathnaver.

The Earl’s twin brother Martin, a few minutes younger, received £250,000 in the £18million will written by his mother Elizabeth, Countess of Sutherland three days before her death.

Martin is married to Mary Ann Balfour – a niece of the notorious Conservative Minister John Profumo, who was at the center of the 1963 Profumo Affair.

Martin suffered tragedy of his own when his eldest son, former aid worker Jamie Janson, took his own life in 2019.

Mr Janson, 44, had traveled to Syria to fight ISIS and was arrested on suspicion of terrorist offenses on his return to the UK in March 2018.

He was released under investigation but was never charged with a crime and is believed to have been living in London at the time of his death.

His father Martin Janson, 72, told MailOnline at the time: “My son Jamie took his own life at the age of 44.

“As a family we are all devastated and do not want to speak about the circumstances. It’s tragic and something we’re all trying to come to terms with.

“There will be a funeral next week at the family home in northern Scotland.”

Lord Strathnaver’s father Alistair, the current 25th Earl of Sutherland, pictured outside the family home of Dunrobin Castle in 1997

Released probate documents confirmed that the Countess, with the assistance of Farrer & Co, the Queen’s solicitors, drafted a new will setting out the fate of her vast fortune.

The bulk of the will was left to trusts associated with the castle.

Farrer explained that he could not comment, nor could a spokesman for the 189-room castle, which the Countess and Alistair had restored to its former glory and opened to the public after years of institutional use as a boys’ boarding school.

Elizabeth inherited the castle when her uncle, the 5th Duke of Sutherland, died childless in 1963. The title is among those with a disposition allowing women to inherit in the absence of a male heir.

The Countess, who was also Chief of Clan Sutherland, was orphaned at the age of ten before becoming a land girl, a proficient linguist and an accomplished laboratory technician in quick succession during the Second World War.

Dunrobin Castle is the most northerly of Scotland’s great manor houses. A spokesman said the family had not commented at the time.

Lord Strathnaver was the only son of the current Earl and had a younger sister, Elizabeth, and two older half-sisters, Rachel and Rosemary, from his father’s first marriage.

It is believed that Rachel could inherit the title as her father’s eldest daughter after his death.

A Police Scotland spokesman said: “We were made aware of concerns about a 40-year-old man near Thurso Castle just after 11.20pm on Saturday 4 September.

“Emergency services were present but the man was pronounced dead at the scene.

“His death is being treated as unexplained and an investigation is being conducted to determine the full circumstances.”

https://www.dailymail.co.uk/news/article-11181283/Scottish-aristocrat-Lord-Strathnaver-40-dead-foot-30ft-cliffs-near-Thurso-castle.html?ns_mchannel=rss&ns_campaign=1490&ito=1490 Scottish aristocrat Lord Strathnaver, 40, is found dead at the base of a 30ft cliff near Thurso Castle