Like Mother like daughter! Serena Williams’ adorable four-year-old Olympia steals the show at the US Open by MATCHING her stunning diamond-encrusted outfit in what may be her mother’s last singles match

Serena Williams and her adorable four-year-old daughter Olympia were decked out in matching diamond outfits for the 23-time Grand Slam winner’s blockbuster first-round match at the US Open on Monday.

Her outfit, made by longtime partner Nike, is all black and encrusted with diamonds. To highlight the importance of the occasion, Nike produced a matching outfit for their daughter Olympia.

The 23-time Grand Slam champion is expected to retire after the US Open and her potential swan song could happen Monday night when she takes on Danka Kovinic on day one of the tournament in Arthur Ashe.

Williams is known for her bold fashion statements on the pitch at Flushing Meadows, from wearing a denim miniskirt at the 2004 US Open to her black Nike catsuit at Roland Garros in 2018.

Designed months ago through insight from Williams, she appeared on court in an all-black outfit inspired by figure skating competition attire, which included a six-layer skirt that nodded to Serena’s six previous Flushing titles, beginning in 1999.

The sleek silhouette is designed to allow Williams comfort and freedom of movement, while the bold detailing firmly places her in the spotlight – if she wasn’t already on the Arthur Ashe stage. 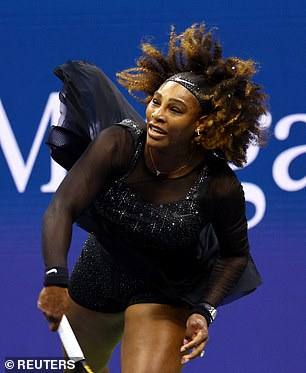 Serena Williams will wear an all-black outfit inspired by figure skating competition attire, with a six-layer skirt to mark her six wins at the tournament

Williams is known for her bold on-pitch fashion statements, including the French Open catsuit

The black bodice is encrusted with crystals in the shape of stars to reference the tournament’s night sky and is then covered with a layer of mesh across the top.

Williams also wears custom-made NikeCourt Flare 2 shoes made from PE, which complement the dress with the iconic Nike Swoosh set in crystals and her initials on the inside.

There are also solid gold deubrés on the laces with 400 hand-set diamonds set in black ceramic, created in collaboration with Serena Williams Jewelry.

The outfit is completed with a matching zipped jacket and tote bag, also in the same deep hue and embellished with crystals.

Williams, who attended fashion school, has always had a penchant for stunning and trend-setting looks, and the tennis great took a hands-on approach to offering the full vision and dialing in the details for her latest outfit.

As for Olympia, the matching outfit doesn’t seem to be the only tribute to her mother she wore.

In addition to the sparkles, Olympia wore pigtails threaded through white pearls, a hairstyle similar to what Serena wore when she won her first US Open title in 1999.

The look is completed with a matching jacket and bag, also embellished with crystals

https://www.dailymail.co.uk/sport/sportsnews/article-11158099/Serena-Williams-wear-diamond-encrusted-Nike-look-Open.html?ns_mchannel=rss&ns_campaign=1490&ito=1490 Serena Williams will wear a diamond-encrusted Nike look at the US Open