“It’s title city, not MVP city!” Shaun O’Hara BLASTS Aaron Rodgers for admitting he wants to be the NFL’s most valuable player again … and says the Green Bay quarterback’s only focus should be on winning the Super Bowl

Former NFL star Shaun O’Hara has attacked Aaron Rodgers for aiming to be MVP again – insisting he should only focus on winning the Lombardi Trophy.

Rodgers outlined his desire to be crowned MVP again during an appearance the Pat McAfee showbefore hinting that he might leave the Green Bay Packers to increase his chances.

The quarterback, who was named the league’s most valuable player for the second straight year in 2021, admitted his best hope of winning the individual award again might be with a new team after Green Bay missed out on a playoff berth this season would have.

“Do I still think I can play? Of course,” he said. “Can I play at a high level? Yes. The highest. I think that in the right situation I can win MVP again. 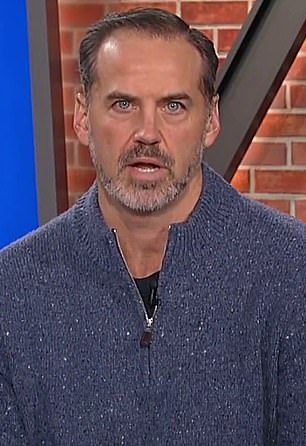 Rodgers, the NFL’s back-to-back MVP, outlined his goal of winning it again on The Pat McAfee Show

“The right situation… is that Green Bay or somewhere else? I’m not sure, but I don’t think you should rule out an opportunity.

But O’Hara, who spent 11 seasons in the NFL with the Cleveland Browns and New York Giants, believes Rodgers’ priorities are all wrong.

‘[He is] one of the best quarterbacks I’ve seen live and on TV,” he said Good morning football in a clip that was deleted from the show’s Twitter account after nearly an hour. “Aaron Rodgers, if he pulled out his wallet now, it would say ‘Bad MF’er on it.’

“Aaron Rodgers, he will go down in history as one of the best quarterbacks to ever play this game. He respectfully made Packers fans forget about Brett Favre, but when you look at what he’s done, it’s incredible.

“Last season was an anomaly for me. Think about it: Aaron Rodgers hasn’t thrown for 300 yards this entire season. Not once. That’s pretty remarkable considering what he’s accomplished in his career. But for me this is a missed opportunity.

O’Hara questioned Rodgers’ priorities, insisting he should only be eyeing the Lombardi trophy

“MVPs are great, that’s great. But I’ve never heard a quarterback, a Hall of Famer quarterback, say, “Yeah, I’d really like to win an MVP.” No, it’s all about the trophy, the Lombardi. You play for the Packers! And Lombardi’s name is on this trophy.

Rodgers spent his entire 18-year career with the Packers but is now weighing his next move after a disappointing season.

Despite the 39-year-old only agreeing to a three-year extension worth $150 million in 2022, the 39-year-old’s future in Green Bay is now the subject of intense speculation ahead of next season and Rodgers says he needs time to establish his decision to reconsider.

“Look, I think you have a sense of where you’re headed, but there’s a lot of things that come into play,” he revealed. “I think just some on my side, it’s the physical part, it’s the emotional part, it’s the spiritual part. It’s the ability to go back out there and give 100 percent.

“Once you commit, you commit. You keep going no matter what the decision, so you know I just need some time right now. I don’t have to ask anyone to respect my time or whatever. That will be the answer until I’m ready, and when I’m ready to speak my mind like I was last year, I’m either all in or I’m out.

The 911 call reveals Lisa Marie Presley's housekeeper in a panic