Collier, 59, was found dead, naked and tied to a tree on September 11 in Athens, Georgia, with her body burned.

No one has been arrested for her brutal murder, and there is no indication that either Bearden or her boyfriend, Andrew Giegerich, are considered suspects.

However, a handwritten message included in police evidence files shows that Giegerich wrote in a note to Bearden in 2021, according to the New York Post: “If you or your family ever come near me again, I will hurt them.”

Giegerich — who was jailed on September 16 for violating his suspended sentence and has a history of domestic violence incidents — reiterated: “Have a nice life you lying ass. Don’t ever contact me again!!!’

He was ordered to show proof of drug abuse treatment within 20 days of his arrest but was released and seen on Friday.

This comes after it was revealed that the Habersham County Sheriff’s Office had issued a search warrant for Bearden’s home, Fox News reported, among several requested as part of the investigation.

Police have not responded to requests for comment on what, if anything, was found in the search of Bearden’s home. 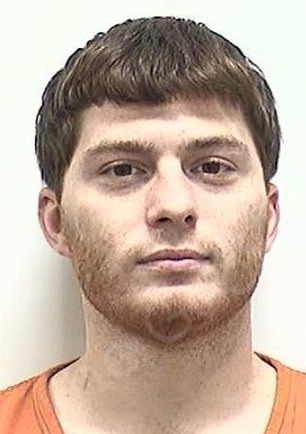 According to a DailyMail.com police report, Debbie’s daughter Amanda Bearden was “in a hysterical state” at the scene when her mother’s body was discovered

Debbie with her daughter in an old Facebook photo. Amanda claims her mother sent her $2,385 on Venmo with a note suggesting she had been kidnapped the day she died. The police exclude a kidnapping

The note was taken in May last year when police intervened in the couple’s relationship after Amanda called 911 and claimed Andrew “broke into” the home to hit her.

She showed them photos of bruises on her arms and shoulders to prove it.

The couple are now living together again in Athens, Georgia, despite previous domestic disputes and restraining orders.

DailyMail.com saw them leave their home this week as the investigation into Debbie’s brutal murder gathered pace.

Police have now ruled out kidnapping and suicide as possible causes of the woman’s death and are now focused on arresting her killer.

Andrew was arrested for battery charging and the couple were ordered to remain separated.

Giegerich has complained that the couple were recently “interrogated” by police about Debbie’s death.

‘That [police have] interrogated us all. The people who are closest [Collier] are sort of considered suspects right now,” he told the Post.

Debbie lived with her husband Steve at their home in Athens.

He fought back tears as he told DailyMail.com on Friday that Debbie was the “love of his life”.

The couple were married four nine years and both had children from previous marriages.

“It’s been two long weeks and I’m very tired. My wife was a wonderful person.”

A close friend of the couple, who asked not to be named, confided to DailyMail.com: “Steve loved Debbie with all his heart. I know it exactly.

“I can’t imagine what he’s going through right now with the horrific loss of his wife and the fact that he has to be a part of the murder investigation and all that entails.

“I’ve known them both for many years and they were a devoted couple.”

In a direct endorsement, he added, “I know suspicion can fall on the families of murder victims, but I would bet my life that Steve had nothing to do with Debbie’s disappearance.”

On September 10, Steve reported Debbie missing, claiming he had not seen her at her home since 9 p.m. the previous night.

Neighbors heard fighting and screams coming from the house the night before she disappeared.

In December 2020, Debbie posted these horrifying photos of a black eye on Facebook. She told friends that she fell on the sidewalk

Debbie’s husband Steve reported her missing on September 10. He told police he last saw her at 9pm last night but they slept in separate rooms because of his snoring

Amanda is pictured leaving her home on Friday. In a previous interview, she said “someone” killed her mother

“She was a beautiful woman and I loved her,” Steve Collier said, distraught of his wife 11 days after her charred, naked body was found in a ravine 60 miles from their Georgia home

Police then tracked the car Debbie was driving – a rented SUV she rented because her own vehicle was being repaired – to a wooded ravine 60 miles from her home. Her naked body was found there, charred and tied to a tree.

The exact cause of death remains unconfirmed.

When questioned, Bearden told police that she last saw her mother the night before she disappeared and that everything was normal. She received the Venmo message on the day her mother was reported missing.

In an interview with CBS after her mother’s body was found, Amanda appeared shaken and had trouble speaking.

“My mother was my everything. Someone took my whole world from me. She was a beautiful, kind, generous woman. She didn’t deserve this,’ she said, her head and hands shaking.

Police have not ruled out anyone as a suspect.

Debbie had given her car in for maintenance and was driving a rented SUV when she died.

That car was equipped with a GPS tracking system, which police led to her body after her husband reported her missing on September 10.

It was found 60 miles from the couple’s modest home, where they were quietly living.

Collier was found 60 miles from the modest home she shared with husband Steven, 67, in Athens, Georgia