Shocking moment Florida’s ‘double dog-napper’ snatches two pets from driveway: Was later found with 20 pets in her home and confessed she wanted to breed them

A double dog snatcher stole two puppies from a driveway in broad daylight in shocking security footage, prompting police to discover 20 dogs in her home that she intended to breed.

Sherry Comer, 49, of Lakeland, Fla., was arrested Thursday after she was caught stealing two small dogs from Liliana Moya’s home, just three miles from her own, around 10:20 a.m. Wednesday.

The breeder strolled to the property and knelt by the dogs in the driveway and began petting the larger dog, security camera footage showed. Seconds later she grabs the puppy by the collar and secures the dog under her arm.

She appears to pull out a treat to encourage the little dog to come over to her, but struggles to get the dog to comply. The dog circles her arm a few times before she violently grabs it and calmly walks back to her blue car parked across the street.

Comer tosses the dog in the back seat before driving down the busy street. 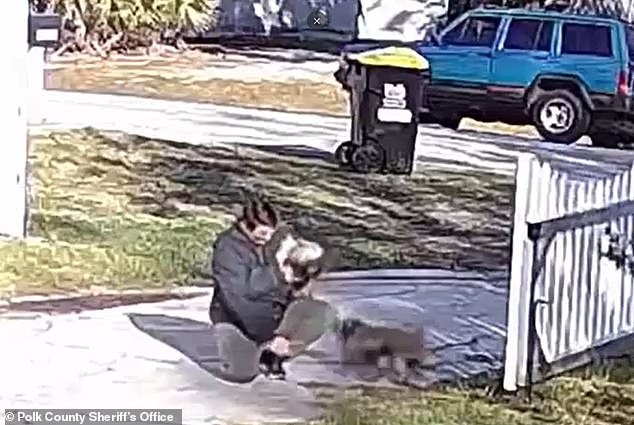 Sherry Comer, 49, of Lakeland (pictured) was arrested Thursday after stealing Liliana Moya’s two puppies from her driveway. She was charged with burglary and double larceny

Security footage showed Comer walking up the driveway, where she spent a few brief moments petting the dogs to gain their trust before picking them up. She then calmly walked back to her vehicle and drove three miles home

Moya posted the security, which was also released by the Polk County Sherriff’s Office, to a local Facebook group.

She wrote: “If you see this lady please report her. My dogs just got stolen and this lady came into my garden and stole my puppies.’

Someone in the Facebook group recognized Comer and notified Moya, who then updated police with the new information.

When detectives got to Comer, they found about 20 dogs inside, including Moyas.

Animal Control was called in to scan every animal that had a chip, but unfortunately none of the animals had a chip and it’s unclear how they got them. All of the dogs are “well cared for and living conditions are clean and safe,” the sheriff’s office said.

Comer was arrested and charged with burglary and double larceny.

The two puppies were returned to Moya.

She was arrested the following day after Moya reported her to police and posted the security footage on a local Facebook group. Someone from the group identified Comer, and when police showed up at her home, they found about 20 dogs in the place of the breeder’s home