By Jonathan Chadwick For Mailonline

Shocking new footage suggests you might want to make sure you’re using the right charger for your vape.

Video by experts from London charity Electrical Safety First shows a powerful explosion from a small lithium-ion battery in an e-cigarette.

E-cigarettes, also known as vapes, are electronic devices that allow you to inhale nicotine in the form of vapor instead of smoke.

But just like smartphones and electric cars, e-cigarettes contain lithium-ion batteries that can burst into flames or explode if punctured, damaged, or overheated. 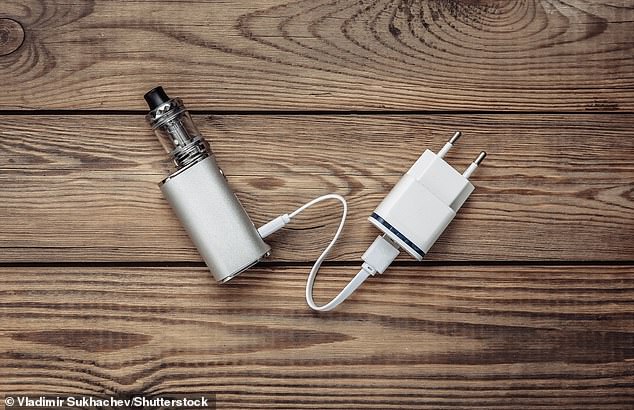 Just like your cell phone, your e-cigarette battery needs to be charged – but only with the charger that came with it (file photo)

WHAT ARE LITHIUM-ION BATTERIES?

A lithium ion battery is a type of rechargeable battery that is charged and discharged by lithium ions moving between the negative (anode) and positive (cathode) electrodes.

Lithium-ion batteries contain lithium, which is only present in ionic form in the electrolyte.

Because lithium-ion batteries are capable of storing high-capacity energy, they are used in a wide variety of applications, including consumer electronics such as smartphones and PCs, industrial robots, manufacturing equipment, and automobiles.

In the video, the small silver vaporizer gets overcharged with a higher voltage than it should when using the wrong USB port.

The battery in the vaporizer can’t handle the higher voltage, so it goes into a “thermal runaway” state and explodes wildly inside a protective Plexiglas container.

The thin wire in the video is a thermocouple that measures the vaporizer’s temperature, which is monitored on a yellow thermometer.

According to the charity, the vape device in the video is unbranded and may have been purchased at a local market or online.

Meanwhile, the charger in the video is a USB port, but not the one that came with the vape when it was purchased.

So that just highlights the dangers of not using the included charger, perhaps after it’s lost or broken.

The UK government also stresses the importance of using the right vape charger.

On its website it states: “Only use the charger that came with the vape to charge it. Don’t charge your vape overnight and check your device regularly when it’s charging. Unplug your vape when fully charged.’

In the video, the vape is overcharged with a wrong USB port with a higher voltage. The battery in the vaporizer can’t handle the higher voltage, so it goes into a “thermal runaway” state and explodes wildly inside a protective Plexiglas container

The thin wire in the video is a thermocouple that measures the vaporizer’s temperature, which is monitored on a yellow thermometer. The charger is black and the e-cigarette is the small silver object on the right

Brits may already be thinking about keeping their vape in their pockets after the devices exploded and caused horrific burns.

In 2020, British photographer Graham Tooby was suddenly engulfed in blue flames and scarred forever when the lithium battery in his vaporizer exploded.

Mr Tooby said he was lucky it missed his genitals and feared what would have happened if his pocket had been an inch to the right.

He told local media: “My brother-in-law threw water on me, but because lithium batteries don’t stop until they run out of energy, they keep burning.

“There was immediate pain and panic and I didn’t really know what to do because it all happened so suddenly, it wasn’t like the device had been pre-heated, it literally went from zero to blue flames and loud hissing noises seconds.

“Without warning, fireworks came out of my pocket and we were all just trying to stop it.”

As a precaution, vapers should not overcharge their e-cigarette batteries and ensure they use a protective battery case.

People are also warned against leaving the vape in direct sunlight or on hot surfaces as this could also trigger a reaction.

Electrical Safety First also warns that e-bike chargers on online marketplaces are flawed and therefore at risk of “devastating fires”.

The charity found e-bike chargers on Amazon Marketplace, eBay, Wish.com and AliExpress that fell below “necessary safety standards for sale to UK consumers”.

HOW DO LITHIUM-ION BATTERIES WORK?

Batteries store and release energy by moving electrons from one “end” of the battery to the other.

We can use the energy of these moving electrons to do work for us, like power a drill.

Generally, the anode is made of carbon and the cathode is made of a chemical compound known as a metal oxide, such as cobalt oxide.

The last ingredient in the battery is known as the electrolyte and is found between the two electrodes.

In lithium ion batteries, the electrolyte is a saline solution containing lithium ions – hence the name.

When you insert the battery into a device, the positively charged lithium ions are attracted to the cathode and move towards the cathode.

Once bombarded with these ions, the cathode becomes more positively charged than the anode and this attracts negatively charged electrons.

You can think of it like a water wheel, except instead of water, there are flowing electrons.

Lithium-ion batteries are particularly useful because they are rechargeable.

When the battery is connected to a charger, the lithium ions move in the opposite direction as before.

As they move from the cathode to the anode, the battery is recovered for another use.

Lithium-ion batteries can also produce much more electrical energy per unit weight than other batteries.

This means that lithium-ion batteries can store the same amount of energy as other batteries, but do so in a lighter and smaller package.

Tracy Grimshaw is leaving A Current Affair: A look back at her 40-year career

How to Get Free FIFA 23 Base Icon Loan