The sister of a football-turned rapper stabbed to death as they partied at Notting Hill carnival together has paid tribute to her ‘best friend and protector’ – as friends lay flower at the scene and police appeal to the ‘several hundred people’ who may have witnessed the murder.

Takayo Nembhard, 21, was fatally stabbed on Ladbroke Grove under the Westway flyover at 8pm on Monday as thousands lined the streets for the west London carnival.

Police officers gave him first aid until the arrival of paramedics, before he was taken to an ambulance ‘through significant crowds in challenging circumstances’. He died in hospital a short time later.

The post read: ‘Takayo, my bestfriend, my brother, my protector. My heart aches. I never knew I could feel pain the way I do [right now]. S**t still doesn’t feel real.

‘You were truly one of a kind and the best brother to me. Words can’t describe how much I’m hurting, I miss everything about you.

‘I love you with my entire heart, I don’t know how I’m gonna do this without you.

‘I wish you could’ve seen how much friends and family have been with us since last night, you are truly honoured and loved.

‘You’ve left us with the biggest blessing. Baby T I promise to look after your son and be there for him and his mum.

‘Your legacy will forever live on Continue to watch over us as I know you are, til we meet again big brother.’

Friends of Mr Nembhard have also laid flowers at the scene with written messages paying tribute.

One said: ‘Farewell my brother, you always been family from young. Still stunned you are gone. You and your mask will live on forever.’

Another friend said at the scene: ‘Dear God, please accept our brother, who was way too young to die. He had so much going for him.’

It comes after Mr Nembhard’s pregnant girlfriend said she ‘felt their unborn baby kick’ as she held his hand while he lay dying. 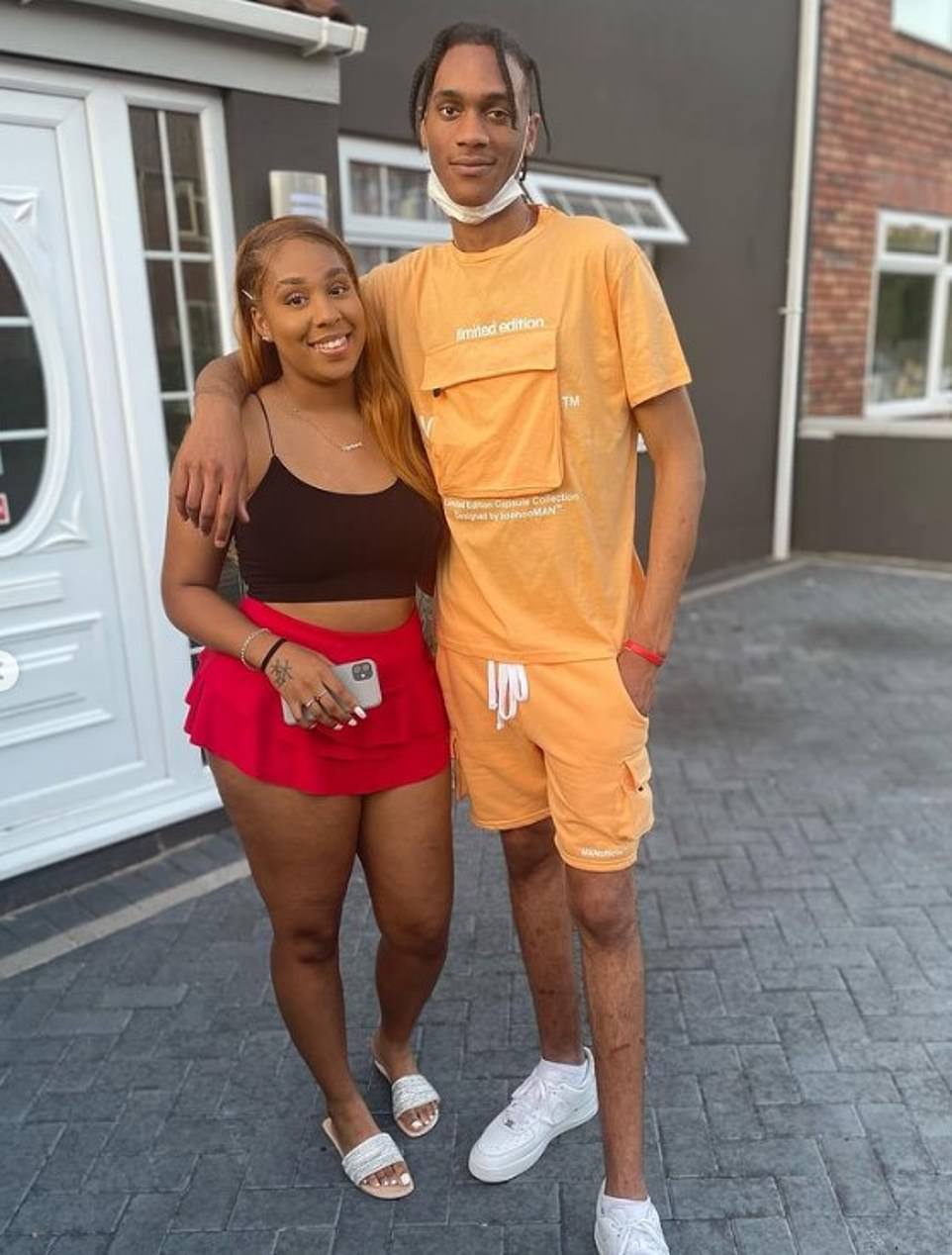 Mr Nembhard (pictured with his girlfriend) was a former youth team player at Bristol Rovers, before turning to drill rapping when he had to retire from football due to an injury

Mr Nembhard’s sister posted a heartfelt tribute to her older brother on Instagram today by posting a series of pictures, adding ‘there was no other like you’

Forensics officers comb the scene in Ladbroke Grove, west London, on Tuesday following the stabbing of the Bristol-based rapper at the carnival

Mr Nembhard’s girlfriend yesterday shared a picture of him hugging her baby bump with the message: ‘So grateful to be carrying a part of you. Love you in this life and the next’

One tribute at the scene read: ‘Farewell my brother, you always been family from young. Still stunned you are gone. You and your mask will live on forever.’

Yesterday, she shared a picture of him hugging her baby bump with the message: ‘So grateful to be carrying a part of you. Love you in this life and the next.’

And in a post to her Instagram page, she added: ‘Takayo my sweet beautiful boy, all I can ask is why over and over again. You was the most kind hearted, loving ,funny and caring person.

‘I’m sat here with sore eyes and a heavy heart as I’ve cried consistently for the last 12 hours while carrying your unborn son.

‘I will remind him daily about how great you were as a son, brother, boyfriend and friend too!

‘The love I have for you will never stop and I will honour your name everyday. I will look after your sisters to the best of my ability. They loved you soo much. We all did.

‘I held your hand yesterday for the last time as you led there lifeless and baby T kicked me straight away and it broke me. It’s just not fair ,we live in such a cruel world. I’m so angry yet keep being told I have to stay strong for the baby.

‘The support you had at the hospital yesterday from family and friends was so lovely. I only wish you knew how loved you really was.

‘I love you whole heartedly and I’m so glad I get to share something so special with you and I know I’ll see you in him everyday.’

In a statement last night, police said there were ‘several hundred people in the immediate area’ and are likely to have been ‘a number of witnesses’ to the fatal stabbing.

Detectives have appealed for video and photo evidence as they continue to probe the incident, but no arrests have yet been made in connection with the fatal stabbing.

Detective Chief Inspector James Shirley of the Met’s Specialist Crime Command, who is leading the investigation, said: ‘I know that there were several hundred people in the immediate area surrounding the murder and while the carnival environment made the management of and access to the scene difficult, it also meant that there were likely to have been a number of witnesses.

Forensics officers comb through bin bags at the scene of the fatal stabbing in Ladbroke Grove, west London, on Tuesday

Takayo Nembhard (pictured with his girlfriend), 21, was yesterday named as the victim of a fatal stabbing on the final day of Notting Hill Carnival on Monday

‘If you saw anything, no matter how insignificant it may seem, please do get in touch.’

Chris Patrick, who managed TKorStretch, said the rapper had travelled to the Notting Hill carnival with his 18-year-old sister from their hometown of Bristol.

He told MailOnline: ‘They’d booked a hotel in Hammersmith and had travelled the 120-miles from Bristol to London to enjoy the carnival.

‘He had gone to enjoy the celebrations, he wasn’t looking for trouble. It was a pointless taking of a life. I received a phone call from his dad last night to say something had happened and could I help as I’m based in London.

‘All I knew at that point is that Takayo had been taken to St Mary’s Hospital in Paddington. I didn’t know how serious it was.

‘I was in the car on route when I got the call to say Takayo was gone. I met his sister at the hospital, she was devastated.

‘His parents have been to see me today. They are hurting incredibly badly. It’s beyond words.

‘I don’t know why it happened. If he was deliberately targeted by someone, it would unlikely be someone from London as Takayo barely knew anyone here. It could be that a rival from Bristol has come all this way to target him.

‘But it could also be the result of an argument that escalated, and someone pulled a knife. It happens unfortunately all too regularly. I don’t know the why yet.

‘What I do know is that it is a senseless killing. He was a young man with his life and career as an artist ahead of him. He was due to be a dad imminently but now that child will never know their father.’

Mr Patrick added: ‘Takayo worked incredibly hard on his music videos, on his social media presence, his TikTok. He was a rising star on his way to reaching the heights of artists like Stormzy, Dave, Wretch 32. He had a bright future.

‘I wanted to work with him straight away when he came to see me at the age of 19. He travelled across Southern England with his dad to see me. He had a good aura.

‘Something needs to be done about knife crime in London and the UK. It’s getting out of control.

‘Anyone caught carrying a knife in the street should get a mandatory five-years in prison. If you use that knife it should be 10-years. If you kill someone, at least 40-years.

‘I hope the police catch whoever done this and they go away for a long, long time.’

A spokesman for his former football club said: ‘Bristol Rovers are deeply saddened to learn of the death of former academy player Takayo Nembhard. The club would like to pass on its condolences to Takayo’s family and friends at this difficult time.’

Mr Nembhard’s death was confirmed in a post to his Instagram account yesterday, which said: ‘Two years ago a young 19-year-old man came from Bristol to meet me at my studio with his dad, his name was Takayo Nembhard AKA TKorStretch.

Monday’s stabbing is thought to have been the first murder at the Notting Hill Carnival since 2004 when Lee Christopher Subaran, 27, of Mill Hill, was shot dead at point-blank range near Kensal Green Underground station

‘That meeting took us on a journey. We recorded some great music together. His talent was endless and I can tell you guys he was close to greatness!

‘So it’s with a heavy heart that I bring the news that Takayo (TKorStretch) passed away last night. He came from Bristol to simply have a good time at the London carnival and this is the end result!

‘My deepest condolences to TK’s mother & father his brother, two sisters, girlfriend and child that will never meet his father! TK was a good kid, a good guy and what has happened breaks my heart. Rest in peace my friend.’

Mayor of London Sadiq Khan said he was ‘sickened’ by the fatal stabbing.

He said: ‘I urge anyone with information to contact the police on 101 or anonymously by @CrimeStoppersUK. There is no honour in staying silent.’

Part of TKorStretch’s persona while performing was wearing masks.

In an interview with Wordplay Magazine last July, he explained why: ‘I don’t want my face to be the face everyone knows. I don’t want to go to Tesco and have people know that it’s me who makes the music.

‘I don’t care about fame, I just want to make music and have people enjoy it. I don’t mind talking to people, don’t get me wrong, but if I’m with my mum or sisters or something I just want to be able to chill out.’

He told how he began making music as a teenager after suffering a leg injury while playing for Bristol Rovers’ under-17 team.

‘Because of that I wanted to find something to keep me focused so I didn’t go insane. I liked singing so I was going to little studios here and there and then started taking it more seriously.’

Monday’s stabbing is thought to have been the first murder at the Notting Hill Carnival since 2004 when Lee Christopher Subaran, 27, of Mill Hill, was shot dead at point-blank range near Kensal Green Underground station.