From Justin Langer’s declining as Australia’s head coach to the importance of a first series of Tests in Pakistan in 24 years, to discussions about mental health and racism, serious conversations quickly erupt in The Test.

But Amazon’s behind-the-scenes documentary on the Australia cricket team, which premieres January 13, also manages to shed some light on the more relaxed aspects of Test cricket.

And often involuntarily, with some of the players revealing themselves to be terribly picky, partial to confusing culinary choices, or absurdly meticulous.

here sports mail takes a look at the documentary’s most embarrassing moments. 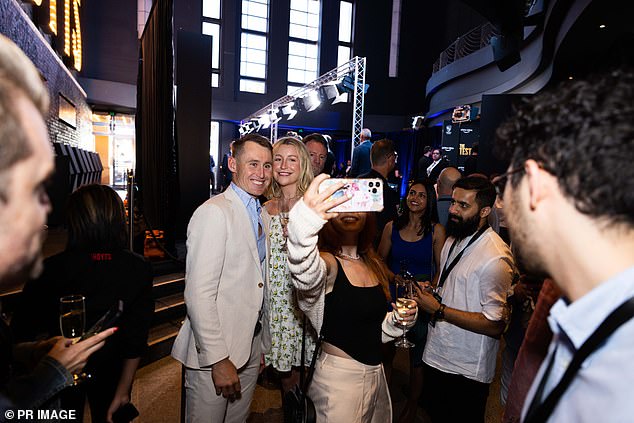 As the world’s top batsman according to the International Cricket Council rankings, Marnus Labuschagne’s appetite for scoring knows no bounds.

And if Episode 1 is anything, his appetite for ham and cheese toasties is just as voracious, with the Aussie star admitting he has a penchant for a snack ahead of a day of Test cricket.

However, Labuschagne’s cooking skills are unlikely to overshadow his punching power any time soon. In the series premiere, the 28-year-old is filmed making himself a toast in the dressing room and reveals that “butter is key to getting it crispy on both sides.”

So far, so normal. But things take an eerie turn when Labuschagne nonchalantly reveals to the camera that sticking piping-hot toast in the fridge is his culinary secret.

“That’s the trick of the trade. Well, not many people do that, but I like it when a toastie is cold. So [it goes] in the fridge to harden the cheese.’

In fact, not many do, Marnus. And for a very good reason.

While Labuschagne (left) and Starc are great buddies on the pitch, the pace bowler needs to set some boundaries in the dressing rooms to prevent his teammate’s chaos from escalating

Labuschagne features prominently again at the start of the second episode, with his dressing room etiquette seemingly being as questionable as his habit of making cheese toasties.

In the words of Mitchell Starc, Labuschagne is one of the “messiest guys in our group”. His mess just expands.’

To prevent this expansion, the Aussie is quick to place duct tape on the ground to set clear boundaries for the batsman and prevent him from invading his personal space.

As expected, Labuschange has none of it: “I’m not saying I’m not messy, but I’m not the most messy,” he replies.

Australia’s Shaun Marsh, Steve Smith and Mitch Marsh celebrate in the dressing room after Australia regained the Ashes in England

Few teams, even outside the confines of cricket, place as much importance on an item as Australia’s Baggy Green Test cricketers.

The perceived misplaced meaning surrounding the baggy green has become an easy stick to beat Australian cricket with, and The Test really lays it on the ground when it comes to its inflated mythology.

“We don’t feel like we own Baggy Green,” Mitchell Marsh explains in the opening episode.

“We understand the privilege we have of wearing the Baggy Green, representing our country and hopefully doing a few things along the way.”

Becky Boston and Pat Cummins attend the premiere of The Test Season Two at Hoyts Entertainment Quarter on January 9, 2023 in Sydney

Anyone who has ever attended a work meeting knows that these can be quite awkward affairs, especially when the word is open to questions, as Pat Cummins discovers at the beginning of Episode 3.

As the players meet at their hotel in Rawalpindi, the Australian skipper tries to gauge his team’s mood at their first meeting after Justin Langer’s acrimonious exit.

“Of course, since we last met a few weeks ago [there’s been] a change of coach,” says Cummins.

“More than anything, I think [else, I want to] open [the floor] Did anyone have any questions or thoughts or wanted clarification on this?’

Viewers could be forgiven for thinking they accidentally jumped to an episode of The Office, such is the eerie silence that greets his question, with players looking around in embarrassment, hoping one of their teammates might reply .

Except nobody does. “You okay?” Cummins muses, looking around the room and nodding to himself.

We’ve all been there.

Episode 3 looks at how to ensure there is never a dull moment on a tour in Pakistan while Australia is practically confined to your hotel.

While Mitchell Marsh and Mitchell Starc play Call of Duty, David Warner and Marnus Labuschagne play on the tennis court.

“I don’t like to admit it, but unforced mistakes beat me,” Warner tells the camera, while Labuschagne begs in vain for some credit.

There’s nothing wrong with that, except that the footage shows Warner looking anything but a rookie on the court, freely playing the kind of shots that many amateur players can only dream of.

However, Labuschagne is determined to have the last word.

“That’s what happens when you don’t make runs,” he jokes. “You need to come out and play tennis”

Move over Nick Kyrgios, there could be a new man in town in Australian tennis.

Smith is known for fidgeting at the crease, making extravagant shots (and leaves), and being downright weird at times — but getting the job done

Steve Smith is ‘a strange person’

From flamboyant hands to his fidgety attitude at the crease, Steve Smith’s idiosyncrasies have long been part of cricket folklore.

But even by his own standards, his meticulousness takes it to a whole new level in Episode 4, where the former Australian captain is shown removing the foam from the thumb pieces of his gloves to soften them.

Almost aware of how nerdy the whole process sounds, Smith explains it to a stunned Glenn Maxwell.

“You’re a strange person,” the all-rounder explains, to which Smith replies, “I am, correct.”

https://www.dailymail.co.uk/sport/cricket/article-11619785/Six-cringeworthy-moments-second-season-Test-documentary-Australias-cricket-team.html?ns_mchannel=rss&ns_campaign=1490&ito=1490 Six pathetic moments from the second season of The Test documentary about the Australian cricket team

Heatwave forecast for NSW, WA, SA, Victoria but Sydney will be spared as rain hits Queensland