At least six Russian climbers are killed after falling from 13,000 feet during a hike on Eurasia’s highest active volcano

By Elena Salvoni For Mailonline

At least six climbers have died trying to climb the highest active volcano in Eurasia in Russia’s Far East, according to local media.

Another six climbers are believed to have been stranded due to bad weather on the 15,884-foot Klyuchevskaya Sopka volcano in Russia’s Kamchatka region.

Four of those killed reportedly died immediately after falling from 13,000 feet, with two others dying shortly thereafter. 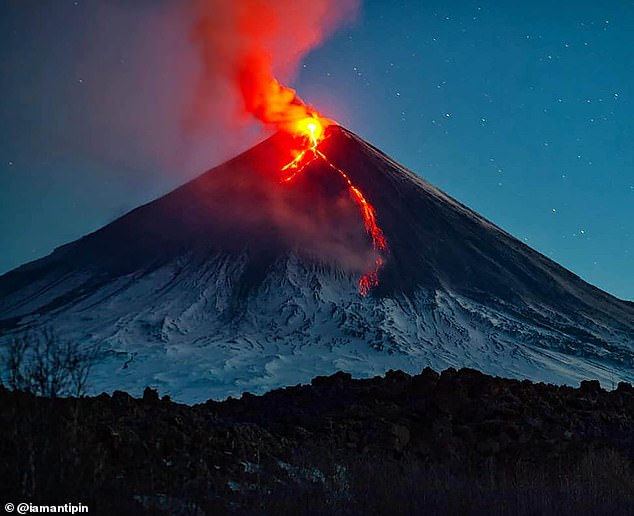 At least six climbers have died on the 15,884-foot Klyuchevskaya Sopka, Eurasia’s tallest active volcano in eastern Russia, local media reported. Six others are said to be stranded

The climbers were attempting to climb to the top of the volcano when the accident occurred about 1,600 feet below the summit, the reports quoted the Kamchatka Region Prosecutor’s Office as saying.

The group, which included two mountain guides, began the ascent on Tuesday. The six dead are said to have been killed yesterday.

One of the guides is said to have broken his leg, but the condition of the other climbers is unknown. All climbers were Russians, the reports say.

Klyuchevskaya Sopka was formed about 6,000 years ago and its first recorded eruption was in 1697.

A rescue team begins their trek up the 15,580-foot volcano to reach a stranded climber in 2020

Considered Russia’s most dangerous volcano, it spewed clouds of ash 20,000 feet into the air in March 2020.

According to the Global Volcanism Program, there have been over 100 eruptions in the past 300 years.

The volcano is Siberia’s highest mountain and is about 4,225 miles east of Moscow.

RAF drones have attacked nearly 1,500 Islamic State fighters in Iraq and Syria over the past eight years