Socceroos manager Graham Arnold is so concerned about social media’s ability to leave his team with a negative attitude that he keeps warning his players to stay away from platforms like Instagram, Facebook and TikTok.

In part two of his exclusive interview with Daily Mail Australia, the man who has competed in Australia’s five previous World Cup campaigns reveals he often gives his stars a very important message: stay off your phones.

“You have to block out the outside noise [when in international camps]so I always tell players to turn off their phones, especially at night,” he said.

“It can be a distraction and often leaves a negative thought space.

“I tell them to listen to music or watch a comedian [online] instead – it means when they go to sleep their minds are relaxed, they think happy thoughts.

“The players are not just athletes or sportsmen – they are achievers who focus on the pitch.” 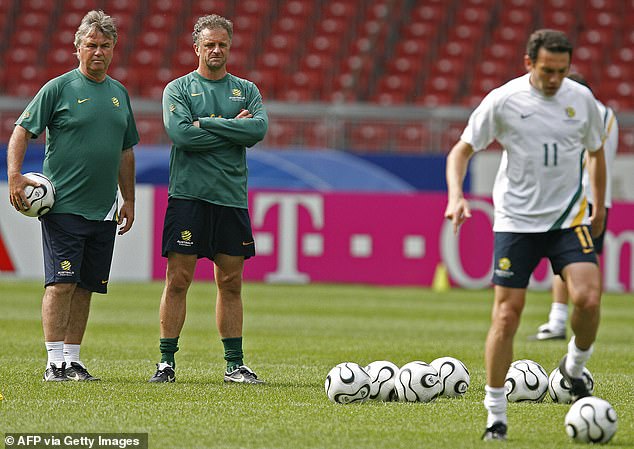 Socceroos coach Graham Arnold first worked with Dutch maestro Guus Hiddink ahead of the 2006 World Cup in Germany. Since then, the two have remained firm friends

Anrold will have the luxury of having Dutchman Guus Hiddink – one of the brightest minds in world football – alongside him in the dugout when his Socceroos take on New Zealand in a Trans-Tasman game in Brisbane next month.

It would be a pinch me, I’m dreaming moment for many managers in world football, but as Arnold explained, the two enjoy a long-standing friendship that was forged ahead of the 2006 World Cup.

There’s also no chance he’ll refer to the former Russia, Netherlands and South Korea coach, 75, as his assistant – especially after bringing Hiddink out of retirement.

‘We’re going way back, and with [Socceroos assistant coach] I asked Rene Meulensteen, who was in Europe to scout out international matches with France and Denmark,” said Arnold.

“Guus genuinely loves the Socceroos and he knows what it takes to be successful.

“Players will have stars in their eyes when they meet him and listen to what he has to say. I’m sure they’ll be all ears.

“I would always use his expertise if he were available, who wouldn’t?”

The classy midfielder’s availability for Australia ahead of Qatar has been a mystery in recent months.

After leaving Scottish giants Celtic, the Canberra-raised 29-year-old has yet to return a call and his football future remains in the balance.

When asked if Rogic has reached out, Arnold’s response was succinct: “He needs a bat.”

Many didn’t expect Arnold’s team to qualify for the World Championships.

Not for the first time, the former striker silenced his critics and rose to the biggest event in world sport after 20 qualifiers – including just four games on Australian soil.

The Sydneysider has also signed Covid twice and critics have called for his resignation ahead of the last two qualifying victories in Doha against the United Arab Emirates and then Peru in that famous penalty shootout.

He puts the needs of his players first and brings out the best in his teams (pictured with Ajdin Hrustic after beating Peru on penalties in Doha).

“It’s been a tough two years,” Arnold said in a gross understatement.

“I faced multiple quarantine stays when I kept coming home during the pandemic, so I didn’t want to do that.

“It meant I didn’t see my wife and kids for a long time, it wasn’t easy.

“As for the criticism, I’m not worried, but I’d like to see some people come in and do my work.”

If Australia shock the world in Qatar and get past the group stage, Arnold will have exceeded expectations.

He is also aiming to improve Australia’s World Cup record, with Japan (2006) and Serbia (2010) being the only sides the Socceroos have beaten since first qualifying in 1974.

Ahead of Qatar, he plans to “enjoy the next few months” and spend Christmas with his family.

As for 2023 and beyond, Arnold isn’t sure yet. If the Socceroos hold their own in November, he won’t be short of offers.

https://www.dailymail.co.uk/sport/football/article-11158721/Socceroos-boss-Graham-Arnold-Guus-Hiddink-factor-perils-social-media-future.html?ns_mchannel=rss&ns_campaign=1490&ito=1490 Socceroos boss Graham Arnold on the Guus Hiddink factor, the dangers of social media and his future

Sasha Obama, 21, is seen on USC campus in a tank top, baggy jeans and ugg boots

Bodybuilding ex-Marine, 36, on US Marshals Most Wanted list said he is "Jack Donovan" from Canada