If Australia is truly going to take the next step and become a global football force, it needs to stop being forced to survive on scraps tossed under the table by the Australian Government.

That is the view of Socceroos past and present, fans and pundits in the wake of the Socceroos’ historic FIFA World Cup campaign in Qatar.

Just like 2006, Australia punched above its weight and rode its underdogs status to the Round of 16, only for their tournament to be ended by a global heavyweight. 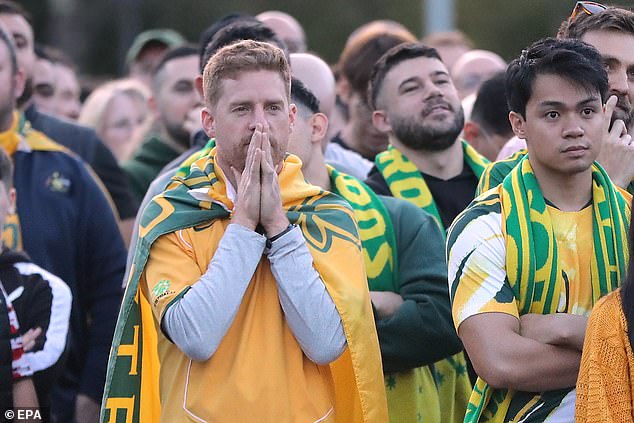 In 2006 it was a controversial loss to eventual champions Italy. On Sunday, Australia were gallant in defeat against an Argentinian side boast the world’s best player Lionel Messi.

Fans flocked to city centres in their thousands in unprecedented scenes on Sunday to watch that match.

It showed a genuine love for the sport in Australia, something that has not been present in the domestic A-League competition, which struggles for relevance compared to the NRL and AFL.

The A-League had to sell a third of its product to an American private equity firm for nearly $140million in 2021, has a broadcast deal worth just A$200million total over five years with ViacomCBS and has crowd numbers dipping below an average of 10,000 per game in 2022.

Now there is a call for the government to step up and recognise the potential of Australian football and fund the next wave of talent so the Socceroos can become a consistent and genuine force at the World Cup.

‘The one thing I would really love to see before I finish up completely of football, is that the government build us a house,’ current giant-slaying coach Graham Arnold said.

While the Socceroos efforts at the World Cup were enormous, there was still palpable disappointment after losing 2-1 to Argentina in the round of 16

Socceroos defender Aziz Behich insisted that the momentum created by his side had to be tapped into in order to grow the game in Australia.

‘This should be a massive stepping stone for football in Australia to go forward,’ Behich told reporters on Sunday.

‘I’m hoping that we’ve inspired the next generation coming through to know that it’s possible to match the best in the world, even being Australian.

‘This is the perfect moment for Australian football to step forward and get more recognised back home.’

‘We’ve accomplished something that no other Socceroos team has, we’ve kept clean sheets, we’ve scored in every game in a World Cup and … we only lost to France and Argentina,’ the 31-year-old added.

‘We’ve done our part and the other part to grow the game, that bit’s out of our hands.’

Fans were quick to agree.

‘Can’t knock this #Socceroos team as they got the most out of themselves. However, as a nation we can’t accept ‘brave’ losses anymore. Our ordinary technical skills cost us progressing further. There needs to be a focus on coaching & developing elite skills at junior level,’ one posted.

‘Don’t want to hear about glorious failure or making the nation proud. If football in this country wants to be truly world class then we need to win. We are back where we were 16 years ago. Celebrating a brave loss. We haven’t progressed,’ tweeted another.

‘It’s been said before and previous opportunities have maybe been squandered but the #Socceroos and #matildas have the potential to be Australia’s clear favourite national sides. We need investment from government over the next few years though. Don’t waste this opportunity,’ pleaded another.

Former Socceroos skipper Paul Wade revealed Football Australia would receive a $19million injection from FIFA for our efforts in Qatar.

He has urged the governing body to invest those funds in promising teenage stars and to resist calls to use it to lower player registration fees.

‘We invest money. FIFA are going to give us $19million for getting through to the round of 16,’ he said.

‘What are we going to do with it?

‘Sure, we might take a little bit of the levy off the kids, but at the end of the day we’ve all got to pay for something, don’t we?

‘When it comes to youth, around the 16, 17 and 18-year-olds, what can we invest in their development to take them to the next level.

‘There are so many things, I don’t know where we start. But one thing is for sure, we’ve got to spend that $19million wisely.’

‘Playing more fixtures at home is a start. We had 4 out of 20 in our qualification campaign due to Covid,’ he tweeted.

‘Get quality opposition in Aus & watch the crowds flock. March is our 1st FIFA window. 4 in total next year before the WCQ start again in Nov & then Asian Cup in Jan 23.

‘We have been fighting to get recognition for our game for a long time. The impact our @Socceroos had on our country fills my heart. The greatest performance by a Socceroos team of all time. Time to build on it. Thanks to Arnie & the team for a lifetime of memories.’

There was a large contingent in Qatar as well, with some estimates putting 7000 Aussies at the World Cup

‘Amazing how well both Australian Basketball and Soccer do on the world stage when you factor in how much funding is received from the state and federal Govt’s when you compare the @AFL @NRL and a few other World Sports,’ he tweeted.

Amazing how well both Australian Basketball and Soccer do on the world stage when you factor in how much funding is received from the state and federal Govt’s when you compare the @AFL @NRL and a few other World Sports.

And another fan pointed to the massive investment in football in the United States in recent years, which has taken them from easybeats to the round of 16 at the World Cup while they also boast Major League Soccer which attracts top tier talent.

‘Australia fought like hell against Argentina. Was proud of the team. Reminded me of #USMNT eight years ago: grit but not enough talent. I hope this run brings the funding, inspiration to young players and fan support to make the #Socceroos a force in 4 and 8 years from now,’ they posted.

The current crop of Socceroos is young and will be back for another round of World Cup qualifying, but will need more elite talent coming through

Football Australia chair Chris Nikou was optimistic that the game will grow in Australia following the World Cup, speaking after the November AGM.

‘I look forward to the excitement that 2023 brings, with continued stakeholder alignment and buy-in remaining a strong focus as we acknowledge our common interests and act with a unity of purpose to pursue our common goals,’ he said.

‘It will take courage and boldness to make the right decisions for the broader good of the game.’

A-League club Brisbane Roar used to pull big crowds at Suncorp Stadium but now play at Moreton Daily Stadium at Redcliffe with a capacity of just 10,000

Football Australia might begin its lobbying campaign for more funding today, but the sobering reality is there might not be much left in the coffers for the code.

For a start, the previous Australian Government slashed funding to all sports.

With a reduced kitty, Football Australia now has to battle the other codes that have been well funded in recent years.

The AFL has seen enormous federal government contributions in recent years including $15million of funding towards the Alberton Oval precinct development in Adelaide, while there has also been a reported $10million injection for the West Coast Eagles, $15million for the Sydney Swans and $15million for Collingwood.

That is despite a record $4.5billion broadcast deal being signed off on by the code.

The NRL has been bolstered even more by the federal government in recent years, even with its own five-year broadcast deal that is bringing in $400million annually for the code.

A pledge to spend $2.3 billion on Sydney stadiums has also been topped up by $50 million for seven of New South Wales’ NRL clubs for their centres of excellence.

That is money that has seen the new Bankwest Stadium in Parramatta open its gates, the redeveloped Allianz Stadium and the Wests Tigers world-class centre of excellence.

That is before you even factor in the investment in Townsville’s new stadium for the North Queensland Cowboys.

Compared to those codes, soccer in Australia is fighting for scraps under the table.

The 2022 Federal Budget included $2.7million over two years to encourage greater participation in football through the delivery of specific women and girls’ diversity and inclusion programs. Even that was slashed down from the originally promised $3.1 million.

Sport Australia and the Australian Institute of Sport (AIS) received $158million over two years in 2019, but Football Australia has to jostle with every other sport for those benefits.

Meanwhile, the A-League had to sell a third of its product to an American private equity firm for nearly $140million in 2021, has a broadcast deal worth just A$200million total over five years with ViacomCBS and has crowd numbers dipping below 10,000.