South Carolina mother-of-nine, 42, is shot while looking out the window of her home “by a drunk neighbor shooting at targets in his backyard” while telling children to “get help” in their final moments to fetch”.

A mother of nine was killed looking out the back window of her South Carolina home when a neighbor who was reportedly intoxicated fired at targets in his backyard, officials said.

Kesha Luwan Lucille Tate, 42, fell to the ground and died after being hit by a bullet in her chest as she walked to the window to see what was going on when she heard gunfire, coroner Dennis Fowler said Cherokee County, per the Associated Press reported.

Nicholas Skylar Lucas, 30, who lives in the house behind Tate, was charged hours later with involuntary manslaughter and shooting while under the influence. He was taken into custody, Cherokee County deputies said.

The harrowing incident took place around 6:30 p.m. Saturday in Gaffney, South Carolina, the area known as the “Peach Capital of South Carolina.” 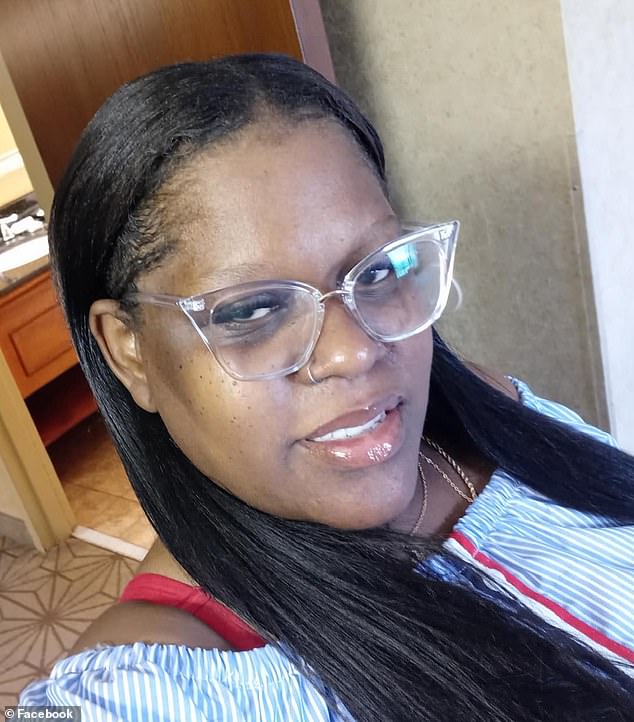 Kesha Luwan Lucille Tate, 42, died when a bullet hit her chest after walking to her window after hearing gunfire, Cherokee County coroner Dennis Fowler said, according to the AP

Nicholas Skylar Lucas, 30, who lives in the house behind Tate, was charged hours later with involuntary manslaughter and shooting while under the influence. He was taken into custody, Cherokee County deputies said

The back door of the victim’s home in Gaffney, South Carolina

Family members said Tate was on the phone with her own mother and wanted to help one of her younger children cook. As she looked out the back door window to see where the shots were coming from, she fell to the ground.

The last words she spoke as she lay dying: “Go get help. I love you,” reported WYFF4 News.

Markia Tate, a family member, said: “They literally had to take the kids away from their mother.”

The loved one said Tate has children as young as four.

Months before the tragedy, family members said Tate had expressed concern about the frequent shootings that took place in the area where her home was located.

According to one report, about 30 houses are in close proximity to each other.

Relatives said the proud mother died surrounded by her children, who were inside at the time of the shooting, but no one else was injured.

Tate’s mother was distraught and held a photo of her daughter in her hands. She cried, “I thought she was going to bury me,” she said in part.

Cherokee County Sheriff Steve Mueller said, “It’s overwhelming that one person thinks it’s okay to do target practice or fire a gun in close proximity to so many other homes in a neighborhood,” he said.

Lucas faces up to five years in prison if charged with involuntary manslaughter and up to two years on the misdemeanor shooting amidst influence charges if convicted.

Tate’s family is devastated by her senseless murder. They want justice for their loved ones

Tate (pictured right, second row), a single mother of nine, is pictured here with some of her children. Her youngest child is four years old

On Tate’s Facebook profile, she wrote that she was single and a “mother of the blessed team of 11.”

One of her daughter’s Traleekia Tate started GoFundMe to raise money for her mother’s funeral expenses. As of Tuesday afternoon, more than $3,600 had been raised to reach their $6,000 goal.

https://www.dailymail.co.uk/news/article-11161433/South-Carolina-mother-42-fatally-shot-looking-window-home-drunk-neighbor.html?ns_mchannel=rss&ns_campaign=1490&ito=1490 South Carolina mother, 42, fatally shot while looking out window of her home ‘by drunk neighbor’