A TikTok video captured by passenger Teighlor Marsalis of the captain’s announcement has gone viral.

“So here’s the deal,” says the pilot, spreading “major dad vibes,” “while we’re on the ground, I have to pull back to the gate, everyone has to get out. 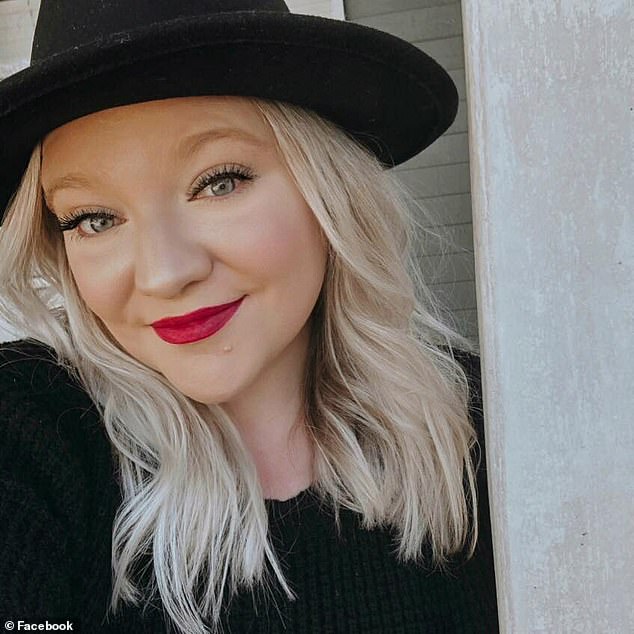 Teighlor Marsalis, left, and her husband, Blaine Marsalis, made their way to Cabo San Lucas after their flight was nearly canceled by a cyber-flasher

Marsalis recorded the second known cyber-flashing incident this year at Southwest Airlines, the first occurring in June on a Detroit-Denver flight

We have to turn on security and this vacation will be ruined. So folks, whatever this AirDrop thing is, stop sending nude pics and let’s get to Cabo.

Commenters on the social media platform seemed to find the video hilarious.

“It feels like my mom turning to me and my twin sister in the car,” Nikki Marie wrote under the video.

In June, a man still referred to as “Larry” in this video reportedly sent indecent photos of himself the entire flight from Detroit to Denver

It’s not the first time a Southwest Airline passenger in Texas has shared all-natural photos on a plane.

And not everyone finds it funny.

In June, according to the New York Post, TikTok-er @DaddyStrange333 posted video taken during a flight from Detroit to Denver of another passenger who AirDropped photos of his privates throughout the flight.

What is cyber flashing?

Cyber-flashing is the act of someone intentionally sending an unwanted sexual image to a stranger using the AirDrop feature on an iPhone. These images typically show male genitalia.

AirDrop, which is specific to iOS devices like iPads and iPhones, and Apple Macs, uses Wi-Fi and Bluetooth to connect to other devices over a short range.

Due to the short range of the technology, people on public transport are often attacked by cyber-flashing via AirDrop.

There is currently no law directly addressing cyber-flashing in England and Wales, although the act was made illegal in Scotland 12 years ago.

The New York State Legislature is considering a bill that would require sexual harassment training for anyone caught in the act.

Cyber-flashing was criminalized under Section 6 of the sex offenses in Scotland in 2009, while a similar measure was also passed unanimously by the Texas Senate in May 2019.

Police investigated the first-ever cyber-flashing case in 2015, after an unwanted graphic appeared on a shocked London commuter’s iPhone.

“Meet Larry, who just airdropped entire aerial photos of his Peepee,” the post reads. “Luckily, I accepted it, saw who sent it and immediately started speaking out. Hold on for the police escort.’

Southwest Airlines has not responded to requests for comment about the Cabo pervert, but in June they confirmed that “Larry” had sent inappropriate photos to passengers.

“We can confirm that this unfortunate incident occurred on a recent flight from Detroit to Denver,” a Southwest Airlines spokesman told The Post. “Our flight attendants immediately addressed the situation and the crew requested local law enforcement officers to meet the flight on arrival, which they did and subsequently arrested the person responsible.

Southwest Airlines will not tolerate this obscene and unacceptable behavior and we sincerely apologize to the other customers on board.”

Last year, Texas became one of the first states to ban the practice known as cyber-flashing.

It is now a felony, punishable by a $500 fine, to send dirty images unsolicited via a digital format.

“These images are often transmitted anonymously between cellphones via text or digital file-sharing services, and often on public transport or in large public settings — thereby infringing on the recipient’s personal space and undermining their sense of security,” Skoufis said when he introduced the measure, Kann.

His law would require training on sexual harassment for those who have broken the law, but stricter measures are on offer in England and Wales.

Lawmakers in these countries are considering the Online Safety Act, which would punish offenders with up to two years in prison for sending “d**k pictures.”

Scotland already passed such a law in 2009.