By Pete Jenson for MailOnline

The Spain manager also admitted he would have happily moved to England during his playing days to fuel rumors he will one day coach in the Premier League.

Speaking on Twitch, the unconventional coach made good on his promise to fans to stream as long as Spain are at the World Cup.

In an uncompromising Q&A series on Thursday night, he opened up about everything from channeling Gavi’s energy on the pitch to whether he puts onions in his Spanish omelet.

When also asked if players should be told not to have sex before games, he said: “It’s ridiculous (to ban it). This is something I consider completely normal. 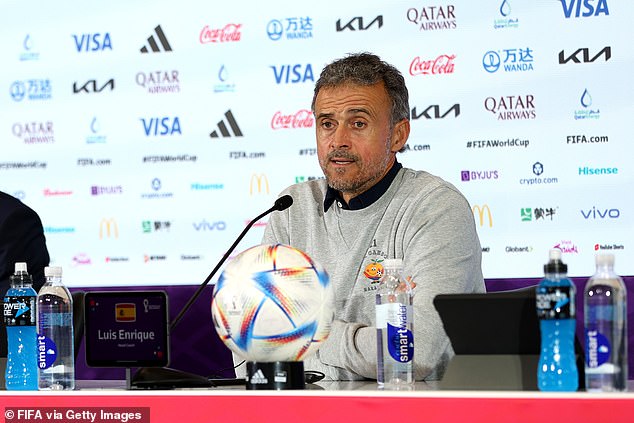 He said it’s “completely normal” for players to have sex before the game. Pictured: His Spanish team ahead of the 7-0 win over Costa Rica

“If they do it, it’s because they have to and want to. But I repeat using common sense! Each with their partner. It is normal. When I was a player, if I was home with my wife before a game, we would do what we had to do.

Enrique’s star in his Spain squad – Ferran Torres – is currently dating his daughter and he previously joked that if he couldn’t start it in a game she would ‘cut his head off’.

Asked who in the Spain squad is most like Enrique, the manager said: “It’s very simple – it’s Mr Ferran Torres – otherwise my daughter will come after me and cut off my head.”

Later in the stream, Enrique was asked which country he would have liked to play in. He said: “Definitely England. The Italian league was very strong in my day but playing in England would have helped me with my English and I could have experienced the more physical, intense football they have there and a different culture.”

Roman Abramovich tried to bring Luis Enrique to Chelsea when he owned the club. And last season he was at the top of Manchester United’s wish list until it became clear he would not let Spain down ahead of the World Cup.

The Spain manager joked that Sira (L) would cut off his head if he didn’t pick Torres (R).

Woman, 31, freezes to death while hiking in Zion National Park

World Cup officials interrupt the live broadcast, threaten to take away equipment and tell the TV crew to leave