‘If you fight, you have to wear it!’: Tottenham star Richarlison apologizes again to Arsenal’s Gabriel Martinelli by posting a picture of the ‘Union t-shirt’… after he threw his compatriot in the north London derby defeat had hidden

Tottenham star Richarlison has apologized to Arsenal’s Gabriel Martinelli after he blacked out his compatriot during the north London derby.

Richarlison’s Spurs were downed 2-0 by their local rivals in the Premier League affair and were beaten at home in the game for the first time since 2014.

As tempers began to boil over, the Brazil striker was seen ignoring Martinelli’s offer of a handshake, but the Spurs star has now apologized and asked his national team-mate to “hug”. 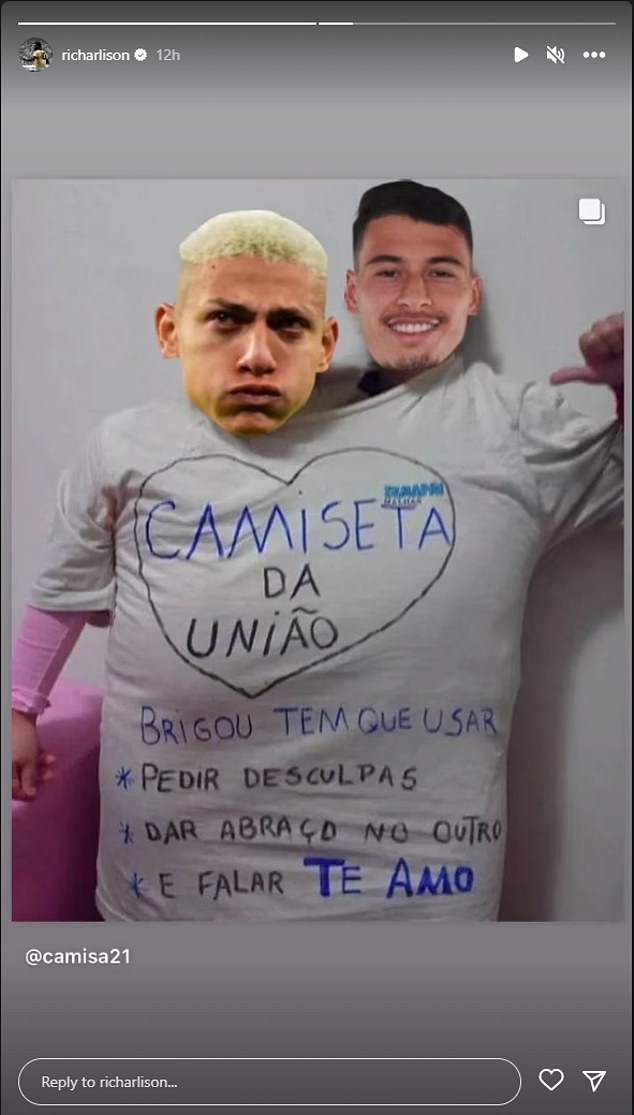 The Brazil international took to Instagram to share a edited image of the two players wearing jerseys that read ‘T-Shirt of Union’.

The message at the top read: “Union t-shirt. If you fight you have to wear it. Excuse. hug it Say “I love you”.’

During the game, Martinelli went to the corner flag and saw his Selecao teammate on the touchline. He offered his hand to Richarlison – in a gesture of respect – but the Spurs star stood unmoved.

After the match, Richarlison admitted in an interview – translated by a social media user – that he did so because he believed the Gunners wideman was “diving a lot”.

He said: “I want to apologize to Martinelli, I told him he dived a lot so I didn’t shake his hand. Also with Gabriel Magalhaes I told him that they pause the game all the time, I just said ‘let’s play’.

The Brazilian forward also caused controversy after the final whistle for his actions towards Arsenal shot-stopper Aaron Ramsdale.

Things got heated after the England goalkeeper taunted full-time Tottenham supporters, kissed his badge and celebrated passionately near the South Stand.

He was quickly confronted by Spurs’ Richarlison – who appeared to be pushing Ramsdale in the face – before the goalkeeper was kicked by a Tottenham supporter.

Speaking of the incident, Richarlison said: “What I really didn’t like was their goalkeeper. He celebrated in front of our fans, that’s a disrespect to our fans.

“He should have celebrated with their fans,” he added, despite his own history of diving allegations and showboating when winning.