Stagecoach tycoon Dame Ann Gloag, her husband and two other family members have been charged in connection with human trafficking offences.

The Scottish Daily Mail can reveal that the 80-year-old multi-millionaire philanthropist has been charged after a police interview on Thursday.

Dame Ann – one of Scotland’s richest women – was accompanied by her husband David McCleary, 72, as she visited Livingston Police Station in West Lothian.

Her stepdaughter and daughter-in-law Sarah Gloag, 47, and son-in-law Paul McNeil (SUBS: SEEKING AGE AS ADD) were also questioned by detectives investigating the allegations of human trafficking – and all four were charged but no arrests were made. 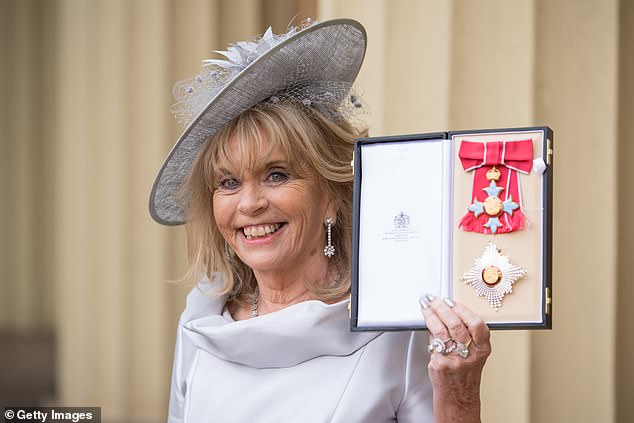 Who is Stagecoach millionaire Ann Gloag?

Born in Perth, Scotland, the 80-year-old began as a registered nurse and spent a 20-year career on a burns unit as a nurse.

In 1980 she founded the Stagecoach Group with the severance pay her father received from his time as a bus driver. Together with her brother Brian Souter and her first husband Robin she founded the company which initially operated buses from Dundee to London.

By the early 1990s, Stagecoach had acquired the National Bus Company’s operations in Cumberland, Hampshire, East Midlands, Ribble, Southdown and the United Counties. Stagecoach bought further bus companies in Scotland, Newcastle and London, and Manchester was added in 1993.

A spokesman for Dame Ann said: “While we cannot comment on the details of an ongoing investigation, Dame Ann strongly denies the malicious allegations made against her, her foundation and her family members and will vigorously defend herself and the work of her.” Foundation to protect her legacy and continue her work to help thousands of people in the UK and abroad every year.’

Sources close to Dame Ann said last night that she and her family were the victims of “collusion” by eight people who invented a “cock and bull story”.

The insider said: “This investigation has been a Kafkaesque nightmare for the past two years.

“People that Dame Ann and her family tried to help turned against her and together made complaints that were unfounded – it’s absolutely shocking.”

The allegations are believed to have been made by people brought to Scotland as part of Dame Ann’s charity work.

Last night, a Police Scotland spokesman said: “On 19 January 2023, four people were charged in connection with an investigation into alleged human trafficking and immigration offences. A report will be sent to the Attorney General of Finance.’

The Gloag Foundation supports “projects which prevent or alleviate poverty and promote the advancement of education, health and religion in the UK and overseas”.

Dame Ann, co-founder of the international transport company Stagecoach, was the company’s managing director until May 2000.

She founded Freedom From Fistula in 2008 and expanded the charity to serve more than 20,000 women and children across Africa.

The charity’s mission is to help women and girls who have been injured and become incontinent after prolonged, disabled childbirth.

Dame Ann previously helped set up a hospital in Malawi and also founded Kenya Children’s Homes in 2002, which now educates and cares for more than 1,500 children in Kenya each year.

In 2019 she was awarded the honor of Dame Commander of the Order of the British Empire by the Queen in recognition of her business and charitable endeavors.

Dame Ann is collectively worth £730million along with her brother, Sir Brian Souter, 68.

Dame Ann is worth a combined £730m together with her brother Sir Brian Souter, 68 (pictured).

She has previously shared how she amassed her wealth by “fighting to survive.”

Prior to her business career, she worked as a ward nurse at Bridge of Earn Hospital in Perthshire, where she met her future husband, Robin Gloag, when he was a patient.

In the 1970s the couple ran a small caravan sales business, but after 20 years in nursing, Dame Ann Gloag branched out.

The couple, along with Ms Gloag’s brother, bought a £425 bus.

Her intention was to have the trip of a lifetime to China, but the plan fell through due to visa problems.

Instead, the entrepreneurs were invited by a construction company to transport workers to construction sites.

The siblings saw the potential and using their savings and their father’s £25,000 timely settlement they bought two more buses.

Stagecoach expanded from its limited Perthshire routes to cheap tickets between Dundee and London.

The company started and the Stagecoach Group is now an international company operating buses, trains, trams and ferries.

Dame Ann’s former husband Robin was killed in a car crash in December 2007 and she has been married to Mr McCleary since 1990.

Celebrating her 70th birthday in 2012, she had 250 guests at her home – Kinfauns Castle in Perthshire – as well as live performances from legendary singer-songwriter Neil Sedaka and veteran Scottish pop star Lulu.

Prior to her business career, she worked as a ward nurse at Bridge of Earn Hospital in Perthshire, where she met her future husband, Robin Gloag, when he was a patient.

In an interview with the Mail in 2018, Dame Ann said: “We grew up from a very humble background.

“My father was a bus driver and my mother was the leader of the missionary society.

“Ever since we were little, we were always taught to share a little bit of what we had, even though we didn’t have a lot.”

Dame Ann grew up in the Church of the Nazarene and there was no television in the house.

Infused with a strong business acumen from an early age, she “always knew I would be the breadwinner.”

Dame Ann left school without a single A-levels but trained as a nurse after attending Perth High School.

She was in the profession for 20 years with wards both as a surgical nurse and on children’s wards.

Dame Ann is one of 175 of the world’s richest people to sign Bill Gates and Warren Buffett’s Giving Pledge, a pledge to donate at least half of their net worth to philanthropy.

Dame Ann said: “I think when you think of yourself as someone who is very blessed in life, you want to do something for someone else.

“I just can’t think of any reason why you wouldn’t do it. If you have the ability, if you have the knowledge and awareness, then it’s easy to try to do something to help.

“If I could beam most people into this situation, they would want to do the same as me. If you can and have the ability to get a person out of this misery, surely you would.’

Dame Ann has said that all her children and grandchildren work at the orphanage and I think that is very good. I think it’s a great leveler.

She said: “It has affected them, they love it. It added to their lives that they were involved. And we adopted a Kenyan child [Peter who was badly injured in a car crash in Kenya in 2009 and remains paralysed]my daughter adopted a Kenyan child so the work we have done has had a great impact on the whole family.’

In 2021, Dame Ann was given the green light for plans to open her Highland retreat as an outdoor holiday resort.

In 1994 she bought the 11th-century Beaufort Castle from Lord Lovat.

Despite local protests, the Stagecoach founder was given the green light for her vacation resort on the property, which includes 50 bespoke vacation cabins.

Dame Ann had been at odds with local residents over the plans since September 2019.

Terrible 911 calls minutes after the accident that killed Devin Willock

Elizabeth Holmes attempted to flee to Mexico after her sentencing, prosecutors say