The reigning NBA champions visited the White House with the Golden State Warriors in Washington, DC at the invitation of President Joe Biden and Vice President Kamala Harris.

The Warriors played the Washington Wizards yesterday and accepted the invitation. 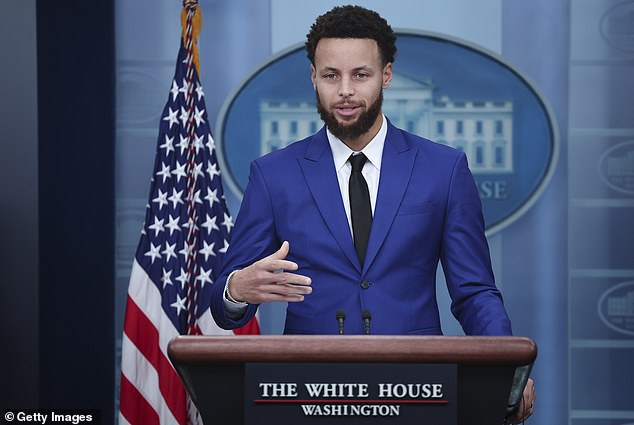 “We want to thank President Biden and Vice President Harris for inviting us to come here. It’s something we never take for granted.

“Seven years ago – I think – we were last here and celebrated our first championship – now we’re back to celebrate our fourth.

“Having this opportunity to reflect on the accomplishments of the last year, to bring everyone together to celebrate, also to recognize the Play Sports Act, to bring people from all walks of life and all backgrounds together to offer inspiration, hope, love and togetherness, and this is our trip was last year. So to have another opportunity to celebrate that means a lot.”

Curry stood at the podium, which is normally held by White House Press Secretary Karine Jean-Pierre

Curry later added the visit was “a great opportunity for us in the basketball community to thank President Biden and his staff for all their hard work and diligence in bringing home Brittney Griner who is a huge part of our basketball family.”

“It means a lot to know that she is here and safe at home with her family and all the work that has been done behind the scenes to make that a reality.

“So I just want to say thank you there and I’m really excited to be celebrating here today, celebrating with our families and appreciating the invitation which is really, really special.”

The team visited the White House in 2015 but withdrew their invitation in 2017 after Curry opposed meeting then-President Donald Trump.

“Going to the White House is considered a great honor for a championship team. Stephen Curry is reluctant, so invitation withdrawn!” Trump tweeted in September 2017.

The team did not receive an invitation for the following season as they won back-to-back titles.