Steven Gerrard has complained that referee Simon Hooper blew the whistle too quickly as he prevented Aston Villa from scoring a perfect goal.

Philippe Coutinho was unlucky not to put his side ahead against champions Manchester City after putting the ball into the net with spectacular skill.

The Brazilian collected a loose ball in Manchester City’s penalty area before dribbling into space 20 yards away and delivering a brilliant flick into the top corner of the goal. 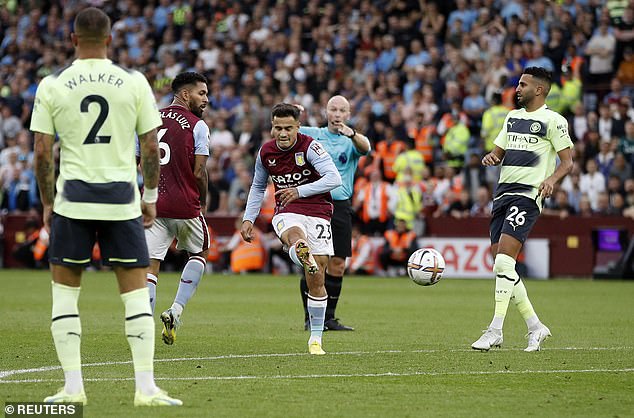 However, he was flagged for offside by the linesman, despite replays showing he was in fact in a legal position.

His manager Steven Gerrard has questioned the officials’ decision to stop the game rather than let it flow.

He said: “I saw a legitimate goal but obviously I’m going to be biased.

“The referee had done the same on the other end where Ezri Konsa challenges the goalkeeper, why not wait? Why not wait and then check or have others check if it’s a foul.

“But he was desperate for the whistle and that’s happened twice in the 90 minutes.”

He said: I think it should have been, I just don’t understand why it wasn’t. The referee responds early on.

https://www.dailymail.co.uk/sport/football/article-11177013/Steven-Gerrard-slams-referee-Simon-Hopper-desperate-whistle-ruling-goal.html?ns_mchannel=rss&ns_campaign=1490&ito=1490 Steven Gerrard criticizes referee Simon Hopper for ruling out a goal “desperately after the whistle”.