A suicide bomber angered by Indonesia’s new criminal code that bans sex outside marriage and insulting the president blew himself up at a police station on the main island of Java today, killing one other person and wounding 11 people.

Agus Sujatno, an Islamist militant and convicted bomb-maker who was released from prison last year, entered the police station in the city of Bandung on a motorbike and detonated a bomb as officers were lining up for morning assembly.

Detectives later found ‘dozens’ of white pieces of paper taped to the attacker’s motorbike protesting the country’s controversial new criminal code that was passed on Tuesday.

West Java Police Chief Suntana, who uses one name, said a paper taped to the Sujatno’s motorbike was recovered from the Astana Anyar police station with the words, ‘Criminal code is the law of infidels, let’s fight the satanic law enforcers.’ 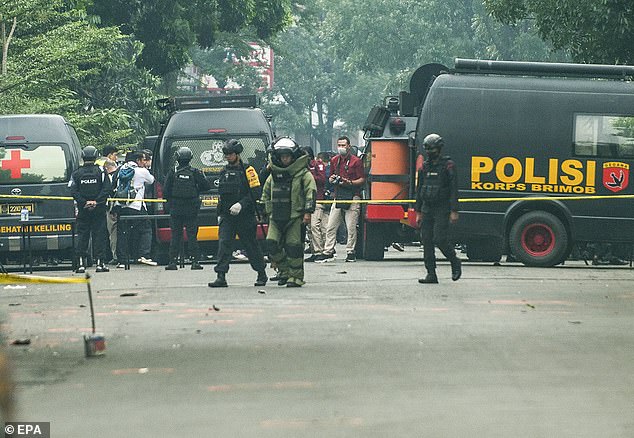 Member of police bomb squad inspect the area outside of a police station where an explosion from a suicide bomb went off in Bandung, West Java, on Wednesday

Policemen secure the scene of a police station blast at Bandung, West Java, Indonesia, on Wednesday

Indonesia’s Parliament on Tuesday passed a new criminal code that bans sex outside of marriage and insulting the president and state institutions.

Though there are sharia-based provisions in the new law, Islamist hardliners could have been angered by other articles that could be used to crackdown on the propagation of extremist ideologies, analysts say

Sujatno, also known by his alias Abu Muslim, is believed to be affiliated with the Islamic State-inspired group Jamaah Ansharut Daulah (JAD) and had been released from prison last year where he had been jailed on terrorism charges.

Todd Elliott, a senior security analyst at Concord Consulting in Jakarta, said it was likely the attack had been planned for some time and was an ideological rejection of the country’s new laws.

‘Including outlawing any ideology that goes against the state ideology, Pancasila, and that would also include extremist ideology.’

Sujatno had entered the police station on his motorbike and detonated one of two bombs he was carrying. The other explosive was safely detonated by the police bomb squad.

A video that circulated on social media showed body parts near the damaged lobby of the police station, which was engulfed in white smoke as people ran out of the building.

Food vendor Herdi Hardiansyah said he was preparing meals behind the station when a loud bang shocked him.

He saw a police officer whom he recognized as one of his customers covered in blood, being carried on a motorcycle by two other officers to a hospital. He later learned the officer died. Ten others and a civilian were wounded.

‘Suddenly I heard the sound of an explosion… I saw a few police officers come out from the station and they couldn’t walk properly,’ another street vendor, Hanes, said.

National Police Chief General Listyo Sigit Prabowo said the attacker was believed to have been a member of the militant organization JAD, which pledged allegiance to the Islamic State group and was responsible for other deadly suicide bombings in Indonesia.

Sujatno was released from the Nusakambangan prison island last year after completing a four-year sentence on charges of terrorist funding and making explosives that were used in a 2017 attack on a municipal building also in Bandung, the capital of West Java province.

Sujatno was still on police ‘red’ lists of militant convicts after being freed from prison because of his rejection of the government’s deradicalization program, Prabowo said.

‘He was still difficult to talk to, and tended to avoid the (deradicalization) process,’ Prabowo said.

The deradicalisation program has been used since 2012 as part of the government’s soft approach to rehabilitate militants and wean them off radical views so they can better integrate into society once they are released.

According to the National Counterterrorism Agency, from about 2,500 militants arrested between 2000 to 2021, about 1,500 have been released from prisons, and nearly 100 of them were recaptured in several attacks or for plotting attacks.

The deradicalization process involves discussion classes with religious figures, prominent scholars and community leaders, as well as financial assistance for opening a business once militants are released.

Prabowo said he ordered police task force units and the counterterrorism squad to investigate the latest attack and find other possible culprits.

Islamist militants have in recent years carried out attacks in the world’s largest Muslim-majority nation, including at churches, police stations and venues frequented by foreigners.

Indonesia has battled militants since bombings on the resort island of Bali in 2002 killed 202 people, who were mostly foreign tourists.

Attacks aimed at foreigners have largely been replaced in recent years with smaller, less deadly strikes targeting the government, police and anti-terrorism forces and people who militants consider infidels.

In 2019, a suicide bomber blew himself up at a busy police station in Medan, Indonesia’s third-largest city, wounding at least six people.

Members of JAD were responsible for a series of suicide church bombings in the city of Surabaya in 2018. Those attacks were perpetrated by three families, who also attached suicide vests to their young children, and killed at least 30 people.

In 2021, a pair of JAD newlyweds carried out a suicide bomb attack at a packed Roman Catholic cathedra in Makassar, killing only themselves and wounding at least 20 people.

In an effort to crack down on militants, Indonesia created a tough new anti-terrorism law after suicide bombings linked to JAD.

The group, which is now largely splintered, has been significantly weakened by a wave of arrests by the counterterrorism agency in recent years, analysts say.

What is Indonesia’s new criminal code?

Indonesia’s new criminal code ushers in a raft of new laws, including banning sex outside of marriage, insulting the president, and expressing any view that runs counter to state ideology.

Among the most contentious articles are those that criminalise sex outside marriage with a punishment of up to one year in jail. Cohabitation between unmarried couples is also banned.

The laws have been partially watered down from an earlier version of the bill so that they can only reported by some people, such as a spouse, parent or child of the offenders.

Still, critics are concerned the laws can be used to police morality in the world’s largest Muslim-majority nation, which has seen a rise in religious conservatism in recent years.

And since they also apply to foreigners, the laws can scare away visitors, including those coming to the prime tourism destination of Bali.

In addition, the articles that ban insulting the president or state institutions, blasphemy, protesting without notification and spreading views deemed to run counter to Indonesia’s secular state ideology have also raised fears about threats to freedom of expression and association.

An article on customary law has triggered concern that some sharia-inspired local bylaws could be replicated in other areas, reinforcing discrimination against women or LGBT groups.

WHO WILL BE AFFECTED?

The new laws will apply to Indonesian citizens and foreigners alike, but will not come into effect for another three years as implementing guidelines are drafted.

Weeks after hosting a successful Group of Twenty (G20) summit that reinforced Indonesia’s position on the global stage, business groups say the new code threatens to damage the country’s image as a tourist and investment destination.

Shinta Widjaja Kamdani, deputy chairperson of the Indonesian Employers’ Association (APINDO), said the rules would do ‘more harm than good’ and act a deterrent to investment.

Indonesia is also trying to entice foreign visitors back after the pandemic and the national tourism board described the new code as ‘totally counter-productive’.

‘We deeply regret that government have closed their eyes. We have already expressed our concern to the ministry of tourism about how harmful this law is,’ said Maulana Yusran, deputy chief of Indonesia’s tourism industry board.

WHAT HAS BEEN THE RESPONSE SO FAR?

The passage of the bill comes after earlier plans to pass a revised code were shelved in 2019 amid mass street protests across the archipelago over the threat to civil liberties. President Joko Widodo stepped in and put the process on hold.

But recent public opposition has been muted in comparison and parliament has revised some of the articles even though critics say the changes do not go far enough and describe the bill’s passage as a ‘huge setback’ for Indonesia’s young democracy.

WHY HAS THE NEW CODE BEEN INTRODUCED?

Indonesia has been discussing revising its criminal code since declaring independence from the Dutch in 1945.

Deputy justice minister, Edward Omar Sharif Hiariej, told Reuters ahead of the bill’s passage he was proud his country would have a criminal code ‘in line with Indonesian values’ and it was time to move beyond its colonial-era laws.

Indonesia’s population is predominantly Muslim but has sizeable groups of Hindus, Christians and people of other faiths. Most Indonesian Muslims practice a moderate version of Islam, but in recent years religious conservatism has crept into politics.

The new code was passed with the support of all parties in the parliament, which is dominated by a large government coalition, and also Islamic parties and groups.

Defending the passage of the bill against criticism, Indonesia’s Law and Human Rights Minister Yasonna Laoly told parliament on Tuesday: ‘It’s not easy for a multicultural and multi-ethnic country to make a criminal code that can accommodate all interests.’

https://www.dailymail.co.uk/news/article-11511823/Suicide-bomber-blows-protest-Indonesias-new-criminal-code.html?ns_mchannel=rss&ns_campaign=1490&ito=1490 Suicide bomber blows himself up in protest over Indonesia’s new criminal code

Katie Price's ex, Kieran Hayler, is being questioned by police on suspicion of stalking