By Madeleine Achenza for Nca Newswire

Notorious vegan activist Tash Peterson has attended a disturbing protest in which she pretended to be a piece of meat.

The Melbourne-based full-time animal rights activist slipped into a “human-sized meat tray” along with two other actors in Sydney’s bustling Pitt Street Mall.

The demonstration was intended to make passers-by think twice about eating meat. 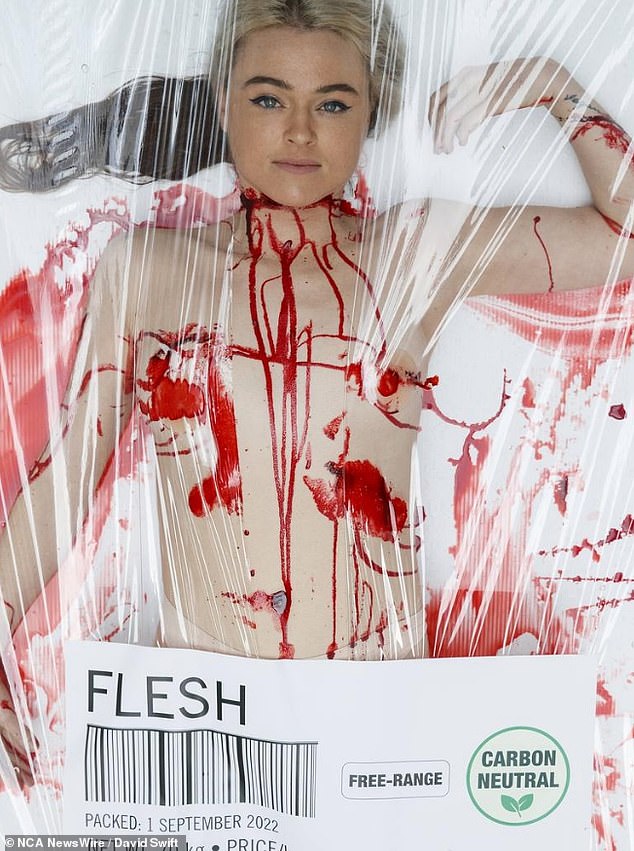 Peterson slipped into a “human-sized meat tray” along with two other actors in Sydney.

“People need to realize that while other animals may look different to us, they’re the same in all really important things, and it’s time to make the connection and go vegan,” said Emily Rice, PETA’s senior communications and partnerships manager .

A Twitter user shared an image of the protest, which was underway around 11am, calling it “abhorrent” and “completely out of whack”.

The 28-year-old shocked viewers two weeks ago when she strutted around a luxury boutique in Melbourne in just her underwear.

The stunt was meant to celebrate the one-year anniversary of her “most powerful protest,” which saw her smear herself in blood and go back into the Louis Vuitton store naked.

Ms. Peterson doused her nearly naked body and the store steps with red liquid while preaching to her stunned audience.

“Louis Vuitton has blood on his hands and so do you if you’re not vegan. The fur, leather, wool, down, shed, and silk industries abuse, torture, and murder animals.

Ms Peterson was eventually approached by security guards who asked her to leave the store.

The 28-year-old is known for drawing public attention when he wears little to no clothing and is drenched in fake blood to shock people into avoiding animal products.

She revealed on her OnlyFans account that she never wore lingerie until last year and only started the account to help her become a full-time rights activist.

Some of her other stunts included holding an incorrectly severed pig’s head covered in blood in front of a Melbourne butcher and receiving a barrage of abuse from the small business owner.

In June, she, again with Ms Ferrario, walked into Bourke Street Mall wearing nothing but bare knickers, nipple covers and carrying a stuffed animal that resembled a bloodied lamb.

Ms Peterson and her partner Jack Higgs recently moved from Western Australia in June after she was banned from all licensed venues following one of her controversial protests.

She announced the move on her Instagram, saying she was “getting that shit out of WA.”

Property Prices: Property prices are falling in all major cities except Darwin