Now even Tesla owners and drivers are slamming the brand’s fancy $5,100 self-driving upgrade as a FLOP – after one car “tried to hit a TREE” when it was self-parking

Tesla’s new self-driving feature has been slammed online as even loyal owners said it made them “nervous” and was “dangerous”.

In December, Tesla gave owners the new enhanced Autopilot safety support feature to try for free for 30 days before being given the option to purchase it for $5100.

The feature was made available to Model 3, Model Y, Model S, and Model X owners.

Advanced autopilot offers automatic lane change assistance, automatic parking and the ability to call the car to your location.

However, Tesla owners took to the Tesla Owners Australia Facebook group to share their horror stories and agreed almost unanimously that they would not upgrade their vehicles at the end of the trial. 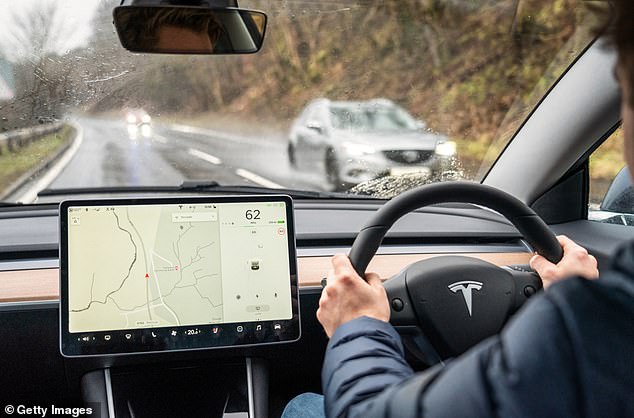 Tesla’s new improved Autopilot safety support feature, which has been made available to drivers for a 30-day free trial, has been slammed online as owners say it makes them “nervous” and is “dangerous”.

In December, Tesla gave owners the new improved Autopilot safety support feature to try for free for 30 days before being given the option to purchase it for $5100

“None of the “features” worked really well. Instead of making life easier they made me nervous and in my experience they were dangerous,” one person said.

“Please…take it away,” wrote another.

While one man said the new technology keeps trying to turn his car into a tree, recounting numerous frightening encounters.

“Smart Summon and trees weren’t a match made in heaven for my car. I had to stop it as it kept moving towards the tree,” he said.

“We thought it might just pass (my wife was next to the car) but at the last moment it made an even sharper, more direct turn towards the tree. I was too scared to try again.

One man said the new technology keeps trying to turn his car into a tree and recounted numerous frightening encounters.

“I think I would have liked the automatic lane change, but I never got used to it. It either seemed to last forever (I’d gotten over it by that point) or it jumped to a spot that wasn’t really there.

“On the last attempt (yesterday) he tried to turn into the tight overtaking traffic. I almost freaked out when I looked in the mirror, jumped on the accelerator and pulled back into my lane.”

Others said the Auto Park feature is a flunk that takes longer and feels less secure than simply parking the car manually.

“I’ve tried auto parking three times and each time it didn’t save me any time at all and got me a lot of worry and panic from the person in the passenger seat who was afraid the car would hit a post, curb or someone in the car another,” one person wrote on social media.

“The car would do a 15-point corner where a carefully executed corner was all I ever needed.

“Also, out of the three times I’ve attempted to park, the car never actually parked in the spot it originally identified, and ended up parking a spot or two away.”

Is The Simpsons: Hit & Run getting a remake?