‘I feel like someone encouraged her’: Girl, 12, found dead at her home in Argentina after practicing viral TikTok ‘blackout’ challenge – aunt says she was found hanging from a rope, and the video shows she did it three times before she died

A 12-year-old girl was found dead at her home in northeastern Argentina after practicing the viral TikTok “blackout challenge,” which was live-streamed to her school friends.

Milagros Soto had a rope wrapped around her neck when her father came home from work on Friday and found her lifeless body in her bedroom, her aunt Laura Luque told TeleNueve television.

Luque said her niece received a link to the TikTok task, also known as the “choking challenge” or “fainting challenge,” via a WhatsApp message from one of her classmates at School #223, Lt. Gen. Pablo Riccieri in Capitán Bermudez, santa fe

Soto tried twice to remove the rope from her neck, failed on the third attempt, and later died while her friends watched.

The distraught aunt believes “someone” encouraged Soto to take up the sickening challenge and reveals her niece was mocked by classmates at her school. 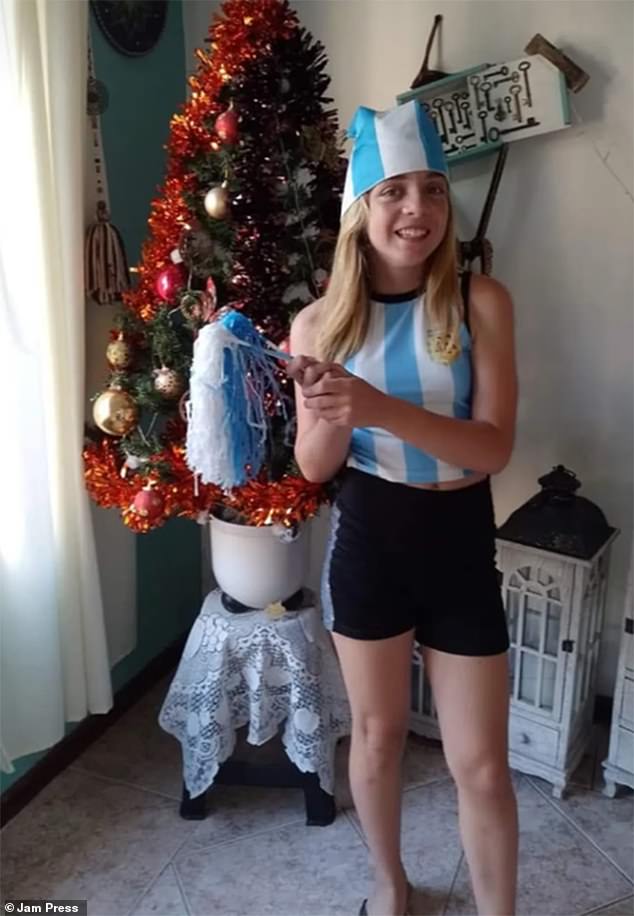 Milagros Soto was found dead at her home in Santa Fe, Argentina, on Friday after taking part in the viral TikTok “blackout challenge.” The 12-year-old had a rope around her neck and was holding her breath and failed to remove it on two attempts as the challenge was livestreamed to her school friends. They attempted a third time to remove the rope and failed before dying

An autopsy found that Milagros Soto’s death was caused by “mechanical asphyxiation by hanging” and that “there is no evidence of abuse or interference by a third party.”

“We have a lot of doubts about everything that happened. She was a very smart girl. She was bullied a lot,” Luque told TV station El Trece. “She told us that nobody at school liked her because they said she looked pretty because she was blonde and had light blue eyes.”

“She was a happy person. unbelievable. An excellent niece, granddaughter, daughter,” said Luque. “A very hardworking girl because we have nothing else to say because everyone here knew her as the girl who smiled with those big eyes.”

A copy of the autopsy obtained by the Clarín newspaper showed that Soto’s death was caused by “mechanical asphyxiation by hanging” and that “there is no evidence of abuse or third-party interference”.

In a statement, officials from School No. 223 Lt. Gen. Pablo Riccieri remembered Soto as “a great student, classmate, sweet, good and kind.”

Milagros Soto (pictured) was reportedly bullied by her classmates because of her blonde hair and light blue eyes, according to her aunt

Milagros Soto, 12, died at her home in northeastern Argentina on Friday after taking part in the viral TikTok “blackout challenge,” which requires a person to hold their breath until they pass out and then share the show must she felt when she was conscious

Authorities seized Soto’s cell phone and are investigating whether any of the school’s students were involved in the deadly challenge.

“We are in a society where if you don’t you are not part of the group. If you don’t do what we tell you, you are (worthless),” Luque said, as quoted by Clarín. “This is ongoing, it’s being investigated, and I’m not going to stop until I know what happened to Milli. All I know is that she could not have taken her own life.”

The viral “blackout challenge” involves a person recording themselves holding their breath for as long as possible before passing out, and then explaining what they felt in a separate video.

https://www.dailymail.co.uk/news/article-11644483/Girl-12-dead-Argentina-home-practicing-viral-TikTok-blackout-challenge.html?ns_mchannel=rss&ns_campaign=1490&ito=1490 The 12-year-old girl was found dead at her home in Argentina after practicing the viral TikTok “blackout challenge”.