A suspected killer who “mutilated” his victim in a vicious knife fight in Manhattan has been released on bail from Rikers Island less than a day after the murder, despite pleas from prosecutors.

Jesus Ramirez, 28, ran into Guarionex Torres, 49, in Times Square and the two began fighting near the Port Authority terminal.

The two men, both from the Bronx, knew each other vaguely but were not well acquainted, police said.

Torres, with a long history of more than 30 arrests and four jail terms, was known for selling drugs in the area: Ramirez was arrested once in 2011 as a 17-year-old for trespassing.

Ramirez punched and stabbed the unarmed Torres so violently that police said he was “maimed.” Photos from the crime scene in the early hours of Friday morning showed a pool of blood.

However, Ramirez was released Saturday by acting Supreme Court Justice Suzanne Adams, who opposed a request by Manhattan District Attorney Alvin Bragg’s office to hold him without bail. 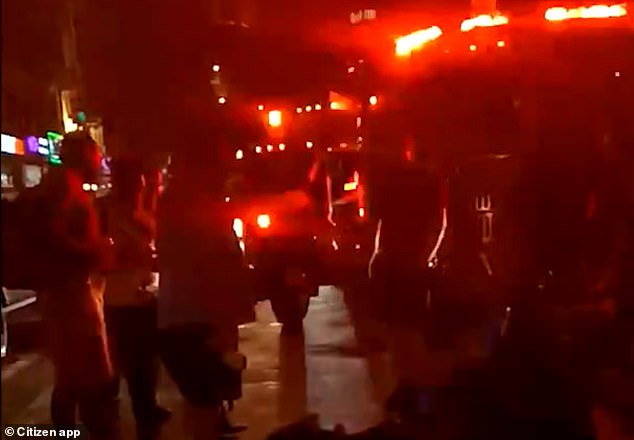 Guarionex Torres, 49, lies face down outside the Port Authority terminal in the early hours of Friday

Footage from a surveillance camera shows Ramirez riding a CitiBike to Torres just before 1 a.m.

Torres had been arrested two weeks earlier for threatening people with a hatchet just two blocks from the scene of the fight. He was charged with threats and possession of a weapon and was back on the streets after posting $3,500 cash bail, according to court filings obtained by The New York Daily News.

The pair began arguing, and Ramirez pulled out a knuckle-knife blade and lunged at his unarmed victim.

Torres was left with a laceration from his right ear to his left cheek, lacerations to his neck and arm, and a stab wound to his torso, the complaint said, according to the New York Post.

Ramirez fled on foot, leaving the bike on the blood-soaked sidewalk.

Acting Supreme Court Justice Suzanne Adams released Jesus Ramirez on $10,000 bail on Saturday – a day after he allegedly murdered an acquaintance in a stabbing attack

Torres was found by police face down in a pool of his own blood and “parts of his body were hanging down,” a source told the Post.

‘[Ramirez] stabbed the guy, mutilated him with brass knuckles with a knife in the middle,” the source added.

‘Sliced ​​the guy open and hit every organ. Had to know what he was doing.’

Ramirez was arrested shortly thereafter, the murder weapon still with him, covered in Torres’ blood.

He told officers he acted in self-defense, saying: “He attacked me first. I stabbed him.’

Ramirez is scheduled to appear in court again on August 31.

The spokesman emphasized that under New York state law, bail “is intended solely to secure the defendant’s return to court.” Nothing else.’

“Our criminal justice reform laws predispose to pre-trial detention and give the prosecuting judge narrow discretion, even for violent crimes, although they require it,” the statement said.

https://www.dailymail.co.uk/news/article-11163147/Thug-28-released-woke-NYC-judge-despite-mutilating-man-49-knife.html?ns_mchannel=rss&ns_campaign=1490&ito=1490 The 28-year-old thug is freed by a woke NYC judge after maiming a 49-year-old man with a knife.

Valorant patch 5.05 release date: when is it?