One young family has shared how what was originally an idyllic vacation at Daydream Island Resort off the coast of Queensland quickly turned into a “nightmare”.

Mish and Kirk Ryan-Welsh were expecting a sunny paradise when they headed to the Whitsundays with their baby Jiah, but they ended up getting off the resort as soon as they could.

The couple said they were shocked by the dilapidated state of the resort – it didn’t look like what had been seen online.

“Because if you don’t laugh you will cry,” they captioned a video from the island.

“99 percent of the time we present wonderful places to visit and stay, but this is not one of those opportunities.”

“Our room was so moldy and all the staff were teenagers who obviously hated being on the island too,” the couple said. 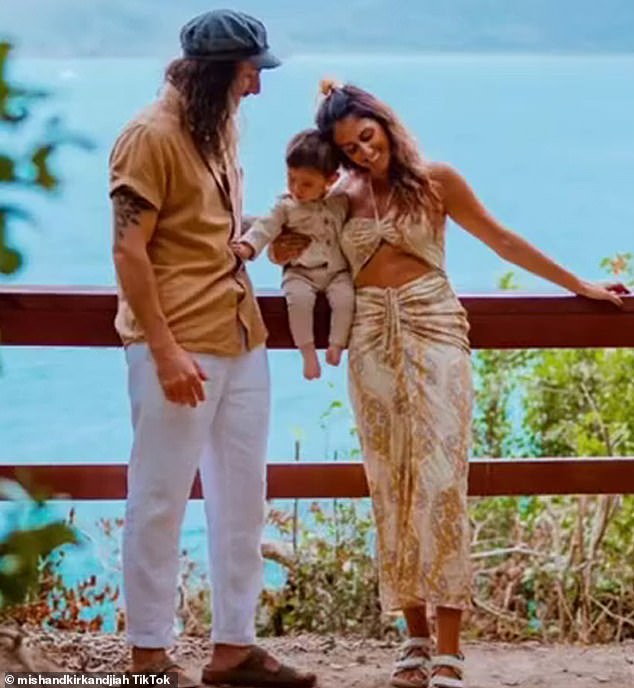 Our @daydreamislandresort NIGHTMARE ☠️ Because if you don’t laugh, you will cry 🙃 99% of the time we present wonderful places to visit + stay, but this is not one of those times. We hope you enjoy a little snapshot of our time on Daydream Island at @whitsundaysqld ☠️ Other fun things to note / – our room was so moldy; the bathroom, lampshades, curtains; and pillows – all the staff were teenagers and also hated being on the island – we ordered 2 glasses of champagne, the girl only filled them both halfway: we took them back and said “champagne is to be filled to the top”, and she said “that’s all we have left”… – the resort claims to be an eco resort but there is plastic + trash + no recycling system everywhere. This is just an excuse for not having to replace towels – everything is always closed or out of order: the pools, bars, vending machines, pool tables, playground, coffee maker, water sports – nothing ever works – the “free” breakfast buffet (which was gross) is empty at 830, no food; tables or cutlery – a member of staff told us Jiah looks like a chimpanzee – ants all over the room and bed – the pools were freezing + very dirty – fake marketing pictures show white sandy beaches, there is no sand on this island, just rocks + coral since Cyclone Debbie in 2017 – If you don’t book dinner a week in advance you won’t get a table at the restaurant. + They don’t offer room service so you have to eat take away pizza for 7 whole nights while being attacked by seagulls. Lesson to learn / never book a fancy resort you see on IG before reading the hundreds of negative google reviews! We forfeited hundreds of dollars worth of accommodation as soon as we found other accommodation available + continued on our little family vacation to Hamilton Island which was bliss

“Everything is always closed or out of service: the pools, bars, vending machines, pool tables, playground, coffee maker, water sports – nothing ever works.

“If you don’t book dinner a week in advance, you won’t get a table at the restaurant and they don’t offer room service, so you have to eat takeout pizza for seven nights while being attacked by seagulls.”

The couple said as they ordered two glasses of champagne, “the girl only filled them both halfway.”

“We took her back and said, ‘Champagne is to be filled to the brim,’ and she said, ‘That’s all we have left,'” they wrote.

The family said the pools were “freezing cold” and “very dirty” while the beaches were filled with stones rather than white sand as advertised.

They also claimed an employee told them Jiah looked “like a chimp.”

They also took offense that Daydream billed itself as an eco-resort.

“The resort claims to be an eco-resort, but there is plastic + trash + no recycling system everywhere,” they said.

“It’s just an excuse not to have towels replaced.”

The family quickly decided they had to leave Daydream at their own expense.

“Lesson to learn, never book any fancy resort you see on Instagram before reading the hundreds of negative Google reviews,” they wrote.

The Adelaide-based family are furious they squandered $3,500 on the holiday destination, which they have now described as a “rip-off”.

One Adelaide family said they were shocked to find Daydream Island’s famous beaches covered in rocks and broken furniture (above).

The couple said the resort was full of overflowing bins and had rubbish “everywhere” (pictured a bin at the Whitsundays resort).

“We forfeited hundreds of dollars worth of housing as soon as we could find other available housing,” they wrote.

The family are now vacationing on Hamilton Island, which they say was “bliss”.

Daydream Island has faced an onslaught of negative reviews since management changed hands to China Capital Investment Group (CCIG) in 2015.

They said the hotel was old and dirty, although it was “renovated” after being destroyed by Cyclone Debbi in 2017 (pictured a corridor at the resort).

Ratings took another hit after being devastated by Cyclone Debbie in 2017, which ravaged the island’s pristine white beaches.

Hundreds of commenters under the family’s video shared similar experiences with the island or said they had crossed it off their bucket list.

“Just canceled and booked into Airlie Beach. Cost me $400 but well worth it thanks for the warning!” wrote one commenter.

“That’s what Daydream is known for. Some friends left last week and what a disappointing experience they had, they ended up leaving early,” said another.

“Well I just crossed that off the vacation list,” wrote another person.

Another said: “This looks like the holiday from hell!”

“Went there in 2020 and we called it nightmare island honestly couldn’t wait to get away,” wrote another.

https://www.dailymail.co.uk/news/article-11166557/Adelaide-family-say-Queensland-Whitsundays-resort-Daydream-Island-rip-off.html?ns_mchannel=rss&ns_campaign=1490&ito=1490 The Adelaide family say Daydream Island, the Whitsundays resort in Queensland, is a rip-off

Prince Charles is guest editor of The Voice and says he is "grateful" to the African and Caribbean communities.