In 1967 a young surfer and musician from California faced a lifechanging choice – fight in the jungles of Vietnam or move 11,000km to live by the beach in Australia.

Dan Doeppel took the second option and moved to Byron Bay on the NSW far north coast, all expenses paid by his staunchly anti-war mother, Esther.

A Christian real estate agent from Los Angeles, Esther took ‘thou shalt not kill’ literally and didn’t want her son shooting at Viet Cong, so she paid for her musician son Dan – and his entire band – to travel to Australia to avoid being drafted into the army.

At the time, Byron was a tough industrial town best known for waste and sewage from a whaling operation, a meatworks and a piggery ‘colouring the sea and washing on the shore’.

The surf was great, even if the water was so putrid from blood pumped into the ocean, which had the added consequence of attracting sharks. 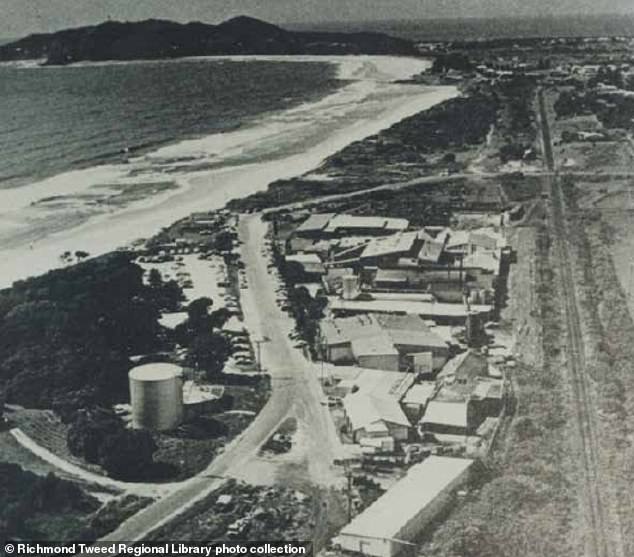 A new book has charted the roots of Byron’s alternative culture not from hippies, but from American surfers, who began to arrive when waste was pumped into the sea from a meatworks and whaling station (pictured, Walker’s Abattoir at Belongil Beach – now a favourite for surfers and sunseekers alike)

In the 1960s Byron was seen as a tough industrial town but that would change slowly after the arrival of a group of Californian surfers (pictured, workers at Walker’s Abattoir at Belongil Beach)

Reports from surfers in 1960 said they spotted sharks under them in the water, attracted by blood in the water from the local abattoir (pictured)

Mr Doeppel, whose remarkable mother bought several properties on the NSW north coast for her son, lived the dream in Byron.

He built a life surfing, playing and promoting music and eventually staging the very first Bluesfest on the site of the old piggery.

But Mr Doeppel and his buddies didn’t have it all their own way, often having to hide their surfboards inside their cars to avoid being stopped by suspicious local police.

The antics and influence of 43 young American surfers including Mr Doeppel and their Aussie mates in transforming Byron Bay in the 1960s and 1970s is the subject of a new book by local woman Tricia Shantz.

The antics and influence of 43 young American surfers including Mr Doeppel in transforming Byron Bay in the 1960s and 1970s is the subject of a new book by local woman Tricia Shantz (pictured, a horse and rider on Jonson Street in 1976)

The surfing community played a huge role in changing the face of Byron Bay in the 1960s and 1970s (pictured, the Old Bertoli building on the corner of Jonson and Lawson Streets)

Contrary to the perception that a hippie swarm turned Byron into a new age paradise in the 1970s, Shantz’s book, Neverland, argues the town’s alternative roots started with the arrival of American surfers.

Before that, it had been little more than a grey working town since 1947.

Mining company ZRL literally mined Rutile and Zircon on Tallow beach at Byron and seven mile beach at nearby Lennox Head until 1972.

Byron had been ‘famous butter and pigs, farming of various types from dairy to beef, coffee, bananas, sugar cane and others, whaling, sand mining on its beaches’, Shantz wrote.

The arrival of Californian surfers on Byron Bay was part of what changed the town (pictured, a man known only as ‘Jimmy Sunshine’ on Byron’s main street in 1973)

A smattering of shaggy-haired, bare-chested entrepreneurial surfers with yank accents and their girlfriends renting local farmhouses saw Byron as more than a working class town (pictured, Dave Ahrens and Brian Jahn at the north end of Flat Rock 1973)

It could have easily stayed an obscure regional backwater.

But the smattering of shaggy-haired, bare-chested entrepreneurial surfers with American accents and their girlfriends renting local farmhouses saw it differently – as an escape and a true surfer’s paradise.

‘If it wasn’t for the American and Australian surfers Byron Bay may still be an industrial town, rather than the cultural destination it has become,’ Shantz wrote.

Their migration began after dozens of young Californians, who were used to crowded waves because of the American surfing boom, got a glimpse of another life in several early surf movies.

Posters for one of Byron’s first music festivals, in 1978, co-promoted by Dan Doeppel, who came to Australia at the insistence of his anti-war mom Esther

Mr Edwards later told friends sharks were all around him in the surf, probably attracted by blood discharged into the ocean from the Walkers abattoir.

Then in 1968 American surfer George Greenough and friends based themselves at Lennox Head, just south of Byron, and took cameras into the surf to make revolutionary surfing movie The Innermost Limits of Pure Fun.

His film was one of the first to shoot inside the barrel of a wave, and inspired audiences to shout and cheer throughout the film.

Mr Greenough is seen as a key figure in a global change in surfing in the late 1960s, the introduction of short boards, partly inspired by watching dolphins swimming at swerving.

Nyarie Abbey sold imported Balinese clothes in her Byron store Neverland way back in 1972. She is also pictured riding her horse up the main street

Later, in 1972 Australian Albert Falzon filmed part of his iconic film Morning of the Earth, which is still played at film festivals today, around the NSW north coast.

The Americans saw not only the opportunity to find empty beaches but also to escape the Vietnam War draft, which was in place from 1964 to 1973.

It saw 2.2 million American men drafted into the US military to fight in Vietnam via a randomised lottery of eligible citizens.

In 1968 American surfer George Greenough and his friends based themselves at Lennox Head, and took cameras into the surf to make revolutionary surfing movie The Innermost Limits of Pure Fun. Pictured, Chris Brock, George Greenough, Gary Keys, Bob McTavish at The Wilderness Factory 1969

Shantz interviewed 43 people for her book, many of them the pioneering Americans who helped change the town.

‘My brother Chris, had come back from Vietnam and he told me that whatever I did, “Don’t go to Vietnam”,’ Dave Ahrens, recalled.

He was a part-time waiter at Encinitas, north of San Diego, when he and a friend decided to go to Byron.

‘We were bored, unemployment was high, Nixon was the US President. We just looked at each other and said, “let’s go to Australia”.’

Lissa Coote opened Byron’s first juice bar in 1973. It was located out the back of the iconic Neverland clothing store

Rusty Miller, who featured in Morning of the Earth married Shantz and still runs a local surf school today, was another.

‘Like so many of my generation, I opposed the war,’ Miller said.

‘At this time the governing Australian Labor Party was becoming increasingly critical of being in Vietnam and favoured a complete withdrawal of its troops. This was all I needed to confirm my decision to make my life in Australia.’

By the mid 1970s, surfers were accepted as part of the community at Byron, where 10 years earlier they had to hide their boards inside their cars to avoid being stopped by police  (pictured, surfboards on a in car Jonson St in 1975)

Some, like Roy Meisel moved to Australia after doing a tour of Vietnam.

Derek Beckner, who came from Los Angeles in 1964, recalled his first impression of Broken Head, just south of Byron.

‘It’s still burnt in my brain. It is still one of the most perfect surfs I’ve ever seen in my life: head high, maybe a foot overhead, peeling from the point all the way down to the parking lot, perfect light green colour, offshore, southwest wind, crystal clear water.’

Many of the surfers lived in group houses, renting local farmhouses for as little as $4 a week, including electricity.

Because they couldn’t get the dole and had to work, so they started businesses doing everything from shaping, glassing and selling boards.

The meatworks provided employment to only one American for one day as most wanted to devote their time to all things surfing.

Eventually they and their Australian mates and girlfriends sold surfing accessories and clothing and even started opening restaurants.

Americans Diana Green and her Vietnam vet husband Roy Meisel turned an old butcher’s shop into the Bare Nature surf store (pictured, Diana and Roy getting married in 1970 wearing the deerskin outfits they made themselves)

Mr Meisel and his American wife Diana Green bought an old butcher’s store and turned it into the Bare Nature Surf Shop, together with another couple Bob Newland and his wife Kathy.

Several built careers in arts and entertainment too and with a growing audience for surfing movies, more were made.

One was In Search of Tubular Swells, made in 1976 by Dick Hoole, whose first job was shaping boards at San Juan Surfboards.

Mr Miller launched a local newspaper, The Byron Express, which had the tagline ‘For a Higher Shire’.

Others wrote for the Sydney-based Tracks magazine from Byron.

The locals had never seen anything like the dreamy pastel-painted store, the first of hundreds to come just like it over the years.

‘Surfers turned Byron Bay from fibro grey into technicolour, epitomised by the opening of the Neverland shop on Jonson Street in 1972,’ Shantz wrote.

‘[They] set the agenda for what Byron was to become, changing it from its industrial, working class roots into a culturally diverse town.

‘They were small in numbers but in retrospect their influence was immense.’

One surf movie made locally was In Search of Tubular Swells, made in 1976 by Dick Hoole, whose first job was shaping boards at San Juan Surfboards

The surfers didn’t have it all their own way, often running into trouble with local police who were deeply suspicious of them.

In the early days surfboards were equated with lawlessness and suspected drug use by police, who would pull over any car they saw with a board on the roof.

So surfers bought wagons so they could put their boards inside and drive around undetected.

A ‘surfing solicitor’, Lester Brien, soon moved to Byron and represented many surfers on drug charges.

Shantz’s book is a remarkable time capsule of an important time in Byron’s past, especially because of the extraordinary photos supplied by many of the surfers.

Of the 43 people she interviewed, many still live in the Byron area.

Five of them died before the book was published.

‘These people people well and truly into their 70s now, it was another reason to be documenting this history, people are getting on in years and their stories are fascinating and deserve to be told,’ she said.

Alexis Ohanian, husband of Serena Williams, is gushing about their daughter Olympia on her 5th birthday