A New York City attorney who set an NYPD van on fire with a Molotov cocktail during the George Floyd protests in 2020 pleaded for compassion and a lenient sentence, blaming “unprocessed trauma” and alcohol for her vandalism .

Urooj Rahman, 33, along with Colinford Mattis, 35, pleaded guilty in June to conspiracy to commit destruction, which carries a sentence of no more than five years in prison.

Federal prosecutors agreed to recommend 18 to 24 months in prison in exchange for the plea bargain.

Rahman is now pushing to have that sentence commuted to time after spending 28 days in a federal prison in Brooklyn before posting $250,000 bail.

Court documents say Rahman’s attorneys said on Sept. 9 that Rahman had been drinking vodka “on an empty stomach” and described her condition as “fairly intoxicated” before setting the van on fire, according to the New York Post. 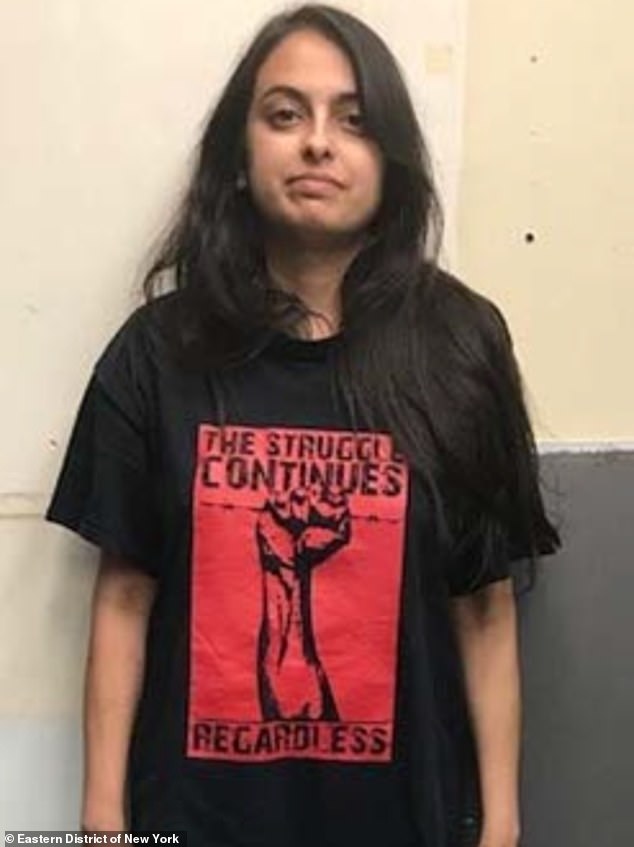 Urooj Rahman (pictured), 33, along with Colinford Mattis, 35, pleaded guilty in June to conspiracy charges, punishable by no more than five years in prison, over the destruction

Urooj Rahman, 33, along with Colinford Mattis, 35, pleaded guilty in June to conspiracy to commit destruction, which carries a sentence of no more than five years in prison

The attorneys wrote in a filing to Brooklyn federal court judge Brian M. Cogan: “Throwing the Molotov cocktail was a way of expressing anger at police officers across the country who didn’t care about the lives of black people. It was an act of protest to avoid harming others.”

According to lawyers, that wasn’t Rahman’s only apology. They added that she suffered “early trauma” from living as a Muslim in New York City after 9/11; she suffers from “abusive relationships” and “injustices she has witnessed here and abroad.”

However, an interview before the chaos reveals that Rahman speaks clearly for her cause and does not slur her speech at all.

Rahman and Mattis initially faced life imprisonment in their first arrest in 2020, which was then reduced to 10 years in October 2021 before the plea deal.

Urooj Rahman, 33, (left) exits Brooklyn Federal Courthouse Thursday after signing a plea deal for the NYPD to torch an NYPD van during the 2020 George Floyd protests

The couple were arrested on May 30, 2020 during clashes between protesters and police during an outbreak of demonstrations following Floyd’s killing by Minnesota Police Officer Derek Chauvin.

Surveillance cameras caught Rahman, a human rights lawyer, hurling a Molotov cocktail bomb into a parked police vehicle, setting the interior on fire. No one was injured in the attack, but the vehicle was severely damaged.

Officers arrested the lawyers a short time later and said they found a lighter, a Bud Light beer bottle filled with toilet paper and a gas tank in the back of a minivan driven by Mattis, a corporate lawyer. Prosecutors accuse the attorneys of distributing and throwing Molotov cocktails at others.

An NYPD van set on fire during the George Floyd protests in Brooklyn in May 2020. It is not clear if this is the same vehicle that the lawyers hit with Molotovs

A burned-out NYPD van after the May 2020 protest. It is not clear if this is the same vehicle that the lawyers hit with molotovs

Originally, Mattis and Rahman faced a mandatory minimum count of 40 years and life in prison when they were arrested in 2020.

The government’s prosecution plan then shifted to a 10-year terrorism-enhanced sentence based on an October 2021 hearing in a Brooklyn federal court in which Mattis and Rahman each pleaded guilty to one count of possession and manufacture of a destructive device.

The couple have spent most of the past two years in domestic confinement.

News of the attorneys’ reduced sentences was met with outrage by Patrick J. Lynch, president of the New York City Police Benevolent Association, who said the lenient sentences would encourage “anti-police radicals.”

“The judge must deny this motion. There is absolutely no justification for reducing the sentence for an anti-police terrorist attack,” Lynch said on Fox News.

“It’s bad enough that these dangerous criminals have been allowed to sit at home for the last two years,” Lynch said.

“Giving them a penalty under guidelines would give the green light to other anti-police radicals trying to further their cause through violence. The judge must deny this request.”

US District Judge Brian Cogan said he is not bound by the sentencing recommendations under the new plea deal but will take that into account when sentencing the two attorneys this fall.

https://www.dailymail.co.uk/news/article-11270889/Lawyer-threw-Molotov-cocktail-NYPD-car-George-Floyd-protests-says-drunk.html?ns_mchannel=rss&ns_campaign=1490&ito=1490 The attorney who threw a Molotov cocktail at the NYPD car during the George Floyd protests says she was drunk

Annuity number you need to retire and live a "comfortable" life, which will get you $545,000