Austria’s FA are defending the decision to hold the crucial Women’s World Cup qualifier against England in a small 3,000-seat stadium after tickets sold out quickly following the success of the Euros

By Kathryn Batte for the Daily Mail

The Austrian FA have defended their decision to stage their Women’s World Cup qualifier against England in a stadium with a capacity of 3,000 spectators, despite growing interest following this summer’s European Championships.

England and Austria are the top two teams in their qualifying group but the Lionesses will secure first place if they are not beaten on Saturday night.

The two teams played in front of a record crowd at Old Trafford on 6 July in the Euro opener and the tournament as a whole saw more fans than ever. England won the competition while Austria were beaten by runners-up Germany in the quarter-finals. 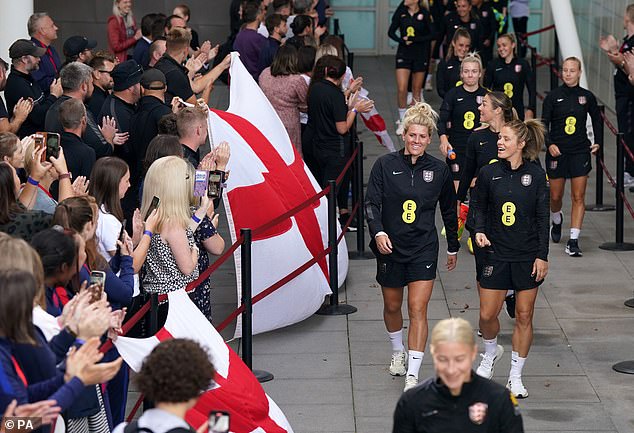 That game, the first since EURO, sold out quickly and with interest in women’s football growing it was felt that a larger venue could have been utilised.

But Austria said the decision was made based on their average attendance, which is below 2,000. They added that this is the first time a women’s national game has sold out and that greater demand for tickets could not have been foreseen.

The choice of stadium had to be submitted to UEFA 60 days before the match, which took place on July 5 – one day before the opening Euro match. It was not possible to change the venue after the tournament. Austria also said that after Euro 2017, where they reached the semi-finals, they played in a larger stadium against Netherlands, who were European champions at the time, but only attracted a little over 2,000 spectators.

A full statement from the Austrian Football Association read: “The decision to play the game in Wiener Neustadt was made ahead of the Euro. The decision was made based on many factors.

“Saturday will also be the first sell-out in the history of the Austrian women’s national team. After the 2017 European Championships, where we reached the semi-finals, we played our first home game against the then European champions, the Netherlands, in a larger stadium and only around 2,000 spectators.

“The SC Wiener Neustadt stadium is our home base because it has by far the best pitch quality of all the stadiums that would host us and is close to our base camp.

“A later move would not have been possible because you have to lock up the stadium with UEFA 60 days before the game.”

After the game against Austria, England host Luxembourg at Stoke City’s Bet 365 stadium on September 6, which is also a full capacity

https://www.dailymail.co.uk/sport/football/article-11170445/Austrian-FA-defend-decision-hold-crucial-qualifier-against-England-small-3-000-seater-stadium.html?ns_mchannel=rss&ns_campaign=1490&ito=1490 The Austrian Football Association is defending the decision to play the decisive qualifier against England in a small stadium with 3,000 spectators