“We live in conditions unsuitable for vermin”: Barracks that housed the Queen’s pallbearers, riddled with mold and dirty water

By Natasha Livingstone and Mark Hookham for The Mail On Sunday

Shameful conditions have been uncovered at the barracks where the army pallbearers who carried the Queen’s coffin stayed ahead of her funeral.

Video made available to The Mail on Sunday shows a mold-infested ceiling and dirty water running down walls and stairs at Wellington Barracks in London.

Hundreds of soldiers who attended the Queen’s funeral procession in September live at the site, while the eight pallbearers from the Queen’s Company, 1st Battalion Grenadier Guards, hailed for their exceptional composure, also stayed there the night before.

Video was taken last month, but army sources say the 19th-century barracks, just 300 meters from Buckingham Palace, has been plagued with problems for months. 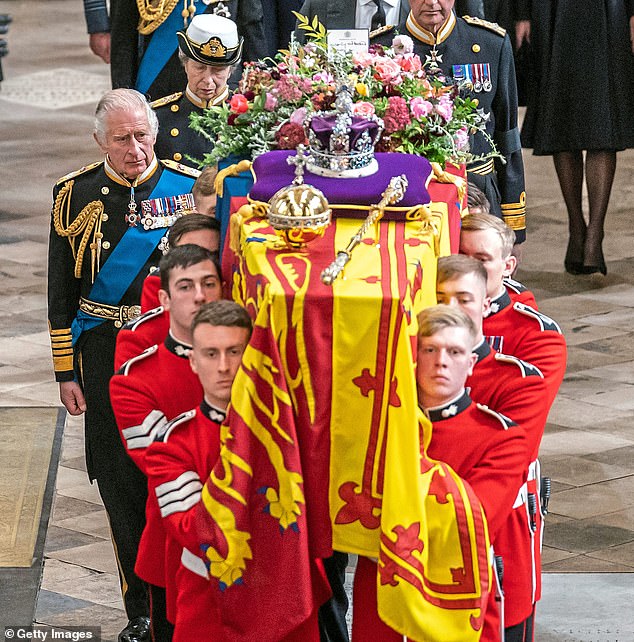 Shameful conditions have been uncovered at the barracks where the army pallbearers who carried the Queen’s coffin stayed ahead of her funeral. Pictured: Pallbearers carrying Queen Elizabeth II’s coffin on September 19, 2022

A Guardsman, who asked not to be named, told The Mail on Sunday that soldiers would enjoy better accommodation while on duty in Iraq.

“I’m honored to play a role in giving our Queen the farewell she deserves,” he said. “However, the impression the public has of a handsome Guardsman is only half the story – we live in conditions unsuitable for vermin.”

The MoS revealed last month the appalling state of military homes and how sleeping bags were being distributed to soldiers and their families whose properties were left without heat or hot water for weeks.

Our investigation prompted Secretary of Defense Ben Wallace to step in to deal with the crisis.

Shocking new numbers this weekend show that Amey, a Department of Defense maintenance contractor, has missed 10,535 urgent repair appointments since April 2022, while its contractor Vivo has missed 4,041 urgent appointments.

Additional data showed that as of 2021, more than 44,000 service members were housed in “Class 4” properties — the Department of Defense’s lowest rating.

Shameful conditions have been uncovered at the barracks where the army pallbearers who carried the Queen’s coffin stayed ahead of her funeral. Pictured: Soldiers from 94 Squadron on September 8, 2022

“Conservatives are breaking fundamental promises we make to our armed forces,” he said.

“Ministers have appointed clumsy contractors who are incompetent on an industrial scale and this is causing misery for service families and wasting taxpayers’ money. This is a slap in the face to those who serve our country.”

The wretched conditions at Wellington Barracks are particularly embarrassing because of the central role it played as the nerve center of Operation London Bridge – the funeral plan for Queen Elizabeth II.

Speaking of conditions at Wellington Barracks, the Ministry of Defense said: “While 95 per cent of this type of accommodation meets the Decent Homes Standard, we will be spending more than £1.6 billion over the next decade to make improvements and build new living quarters.”

The spokesman added: “It is totally unacceptable that some of our employees and their families are not receiving the level of accommodation services they deserve.”

Amey apologized to “anyone experiencing unreasonable delays” and said it was working with the Department of Defense and other suppliers “to address the challenges.”

Vivo said: “Two-thirds of the appointments in the nine months to December where we arrived outside of a family’s one-hour time slot allotted were due to an IT issue in June that was fixed.”

https://www.dailymail.co.uk/news/article-11636005/Barracks-housed-Queens-pallbearers-ridden-mould-dirty-water.html?ns_mchannel=rss&ns_campaign=1490&ito=1490 The barracks that housed the Queen’s pallbearers were full of mold and dirty water

Roman Kemp reacts to his parents' revelation on The Masked Singer