Don’t use the word “MUMMY”… it’s offensive to the ancient Egyptians: the British Museum bans the ancient expression out of “respect” for 3,000-year-old dead

By Julie Henry for Sunday’s Mail

It seems impossible to hurt the feelings of a 3,000 year old corpse. But awakened museum directors have stopped using the word “mummy” to describe the remains of ancient Egyptians, all in the name of “respect.”

They say the term is dehumanizing for the dead and – of course – an unwelcome throwback to Britain’s colonial past.

The British Museum says it uses the latter phrase to emphasize to visitors that they are looking at people who once lived, while the Great North Museum: Hancock in Newcastle says it adopted the new terms for his mummified wife Irtyru has, which dates from around 600 BC. to recognize the history of colonial exploitation and give it the respect it deserves. 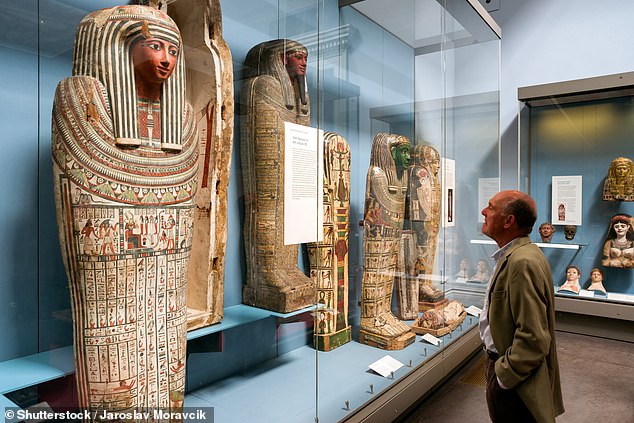 National Museums Scotland in Edinburgh has also removed the word “mummy” from labels on his human remains.

A spokeswoman said: “When we know a person’s name we use that, otherwise we use ‘mummified man, woman, boy, girl or person’ because we are referring to people, not objects.

“The word ‘mummy’ is not wrong, but it is dehumanizing, while the use of the term ‘mummified person’ encourages our visitors to think of the individual.”

Museums are also concerned that the word has become associated with terrifying monsters, thanks to countless B-horror films like 1932’s The Mummy.

Jo Anderson of the Great North Museum said that “Legends of the mummy’s curse and films depicting supernatural monsters … can undermine their humanity”.

The word mummy has been used in English since at least 1615, but some say it had a colonial past, as it derives from the Arabic word mummiya, meaning bitumen, which was used as an embalming substance.

Many mummies found their way to Britain during the Imperial period, particularly during the Victorian era where there was a trend to unwrap them.

(Stock Image) National Museums Scotland in Edinburgh said it was “dehumanizing” to use the word “mama”.

Jeremy Black, author of Imperial Legacies: The British Empire Around The World, said: “When museums close themselves off from popular culture, they show contempt for how we all understand words, meaning and history.

“It would be better to focus on creating an environment that encourages everyone to attend, rather than serving a virtue that signals a minority.”

David Abulafia, Emeritus Professor of Mediterranean History at the University of Cambridge, described the move as odd, and Chris McGovern, Chair of the Campaign for Real Education, said: “The curse of the mummy is driving these academics insane!”

A spokesman for the British Museum said: “Displays and exhibitions have emphasized that mummified remains are those of people who once lived.”

And Adam Goldwater, manager of Great North Museum: Hancock, said they wanted to “describe their collections in a respectful manner and share information from the perspective of their native community.”

Premier League LIVE: Results and updates from all kick-offs on Saturday at 15:00