An awakened Bronx school principal was filmed raising his fists at students in a fighting stance in the middle of a brawl, despite preaching about “civilization.”

The shocking video begins with a fight outside Bronx Collaborative High School after the relative of a girl who allegedly had milk spilled on her by a male student jerk two days earlier punches him.

During the ensuing chaos between students and adults, Principal Brett Schneider, 49, intervenes as he raises his hands and pushes one of the teenagers away, pointing his fists at the minor.

One of the students who witnessed the scene told the New York Post that Schneider “looked like a boxer,” while others were stunned that he was defending grown adults against one of his own students.

Schnieder’s behavior also appeared to be in stark contrast to how he had previously described his leadership qualities.

In an undated post to the Morningside Center for Teaching Social Responsibility in Manhattan, he boasted, “We haven’t had a fight, physically or verbally, in 12 weeks. Because we have built trust. We have created a climate of courtesy and respect.” 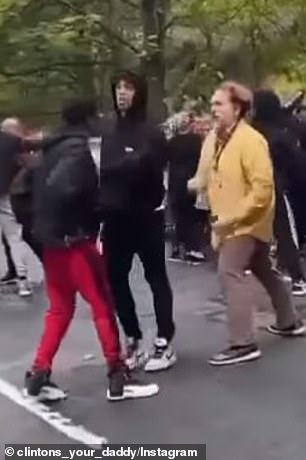 Bronx Collaborative High School principal Brett Schneider (in yellow shirt) jumped into the middle of a fight in October and pushed one of his adult students away. The fight began after one of the adults allegedly punched a student

In the video, a school safety officer could be seen nearby working to stop the violence, but Schnieder stepped in to push the student away.

The headmaster came under scrutiny from parents and students alike, who condemned him for not peacefully ending the brawl that ensued at the school.

Tom Sheppard, a parent representative on the Department of Education’s education policy panel, tweeted: “You’re talking about the headmaster, the headmaster of the school, a grown man who’s supposed to be trained in de-escalating situations, in the street fights and making it worse.’

A senior at the school echoed the criticism, telling the Post: “That’s a grown man. So why are you a grown man helping another grown man fight a child?’

Schneider and the New York City Department of Education did not immediately respond to DailyMail.com’s request for comment.

The NYPD confirmed the incident occurred on October 24 and that no arrests were made.

The practical approach to stopping the brawl seemed far removed from Schnieder’s philosophy of finding “creative responses to conflict.”

Then Schneider is seen fighting the minor with his fists raised

Schneider’s practical approach during the fight strayed far from his philosophy when he became the high school’s first principal in 2013.

In another Morningside Center post, Schnieder, who earned $223,861 last year, said his team “created a very different atmosphere — one of love and respect. Children are less likely to get into fights.

“When a fight arises, they know they are not being demonized… Finding creative responses to conflict can be life-changing.”

The school, which has about 550 students, most of whom are Latino and black, also promotes this philosophy on their website, as they also state that they are committed to social justice.

“We value individuality, diversity and authenticity – we work together to address issues of social justice and bring about positive change in the world,” the school’s website reads.

“Teachers work in community circles each week with students on social justice issues and creatively resolve conflict through restorative circles, conversations, and conferences.”

Schnieder stepped in, even though a school official was there to resolve the matter

Alongside recent criticism of the brawl, Schneider was also blasted by former employees on the UFT solidarity website, a teachers’ union faction that allows educators to post anonymous comments about administrators who “need improvement.”

A former staff member described him as “misogynistic” and unwilling to listen to anyone else’s ideas to help the school.

“He keeps saying he wants to build community, but always just implements his ideas,” wrote the former employee. “The joke is that there’s nothing collaborative about Bronx Collaborative.”

Prior to high school, Schneider worked at the Institute for Collaborative Education, another Manhattan public high school.

He was also a member of the 2019-2020 cohort of Teachers College’s Cahn Fellows Program for Distinguished Principals.

Cahn Scholars are selected from among the top principals of major cities across the United States who work together on specific projects to improve their leadership and schools.

https://www.dailymail.co.uk/news/article-11635375/Woke-Bronx-high-school-principal-caught-squaring-against-students.html?ns_mchannel=rss&ns_campaign=1490&ito=1490 The Bronx High School principal woke up when he was dealing with students