Now SPACE is racist! The Colorado astrophysics professor von Woke moans that her field is riddled with “white supremacy” and sexism — with colleagues using “hypermasculine” and “violent” language to describe the cosmos

A Colorado astrophysicist has claimed her field is permeated with white supremacy and sexism because of the use of “hypermasculine” and “violent” language to describe stars.

Natalie Gosnell, an assistant professor at Colorado College, takes an unconventional approach to physics, comparing stars to people to turn science into an art.

In an interview with the college newspaper, she claimed she’s struggled to break down a divide between art and science that has its roots in “systemic racism.”

Her work aims to “transcend typical disciplinary boundaries to create art historical pieces that rewrite outer space as a feminist space,” she said on her website.

“Both artists and scientists are just observing things about the world, interpreting those observations, and then sharing their interpretation,” Gosnell told Colorado College News.

“As an astrophysicist, I am a product of institutions steeped in systemic racism and white supremacy,” she said. 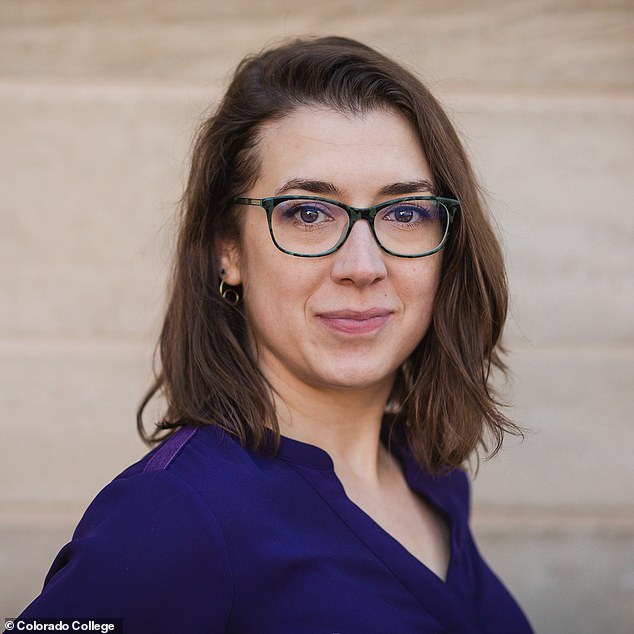 Gosnell takes an unconventional approach to physics, comparing the lifespans of stars and humans to turn science into an art

Claims that academic fields such as science and technology are male-dominated are common and widely accepted, but Gosnell goes further by arguing that the language used to describe scientific phenomena is sexist and racist.

The way stars burn their fuel and die is viewed through a “hypermasculine” lens, and the metaphors used are often “very violent,” she claimed.

One example she gave was that stars that take mass from other stars are called “bad guys,” although that doesn’t seem to be a widely used scientific term.

She may be referring to a 2009 article by popular science journalist Nancy Atkinson, in which Atkinson wrote that “blue laggards [which] Steal mass from companion stars by colliding with their neighbors” are “stellar villains”.

Much of Gosnell’s research is devoted to understanding binary star systems with blue stragglers, where one star often burns out and merges with another.

Gosnell, who studies binary systems with telescopes and imaging, has said she’s trying to combine art and science because the two fields are more similar than people think.

“I think because science and art were so separate, and that’s how it is […] systemic questions within science, the often chosen metaphors [to discuss science] are very violent and hypermasculine,” she said.

“The tenants of white supremacy are emerging [in physics] of individualism and exceptionalism and perfectionism… it’s either/or thinking and there’s no subtlety, there’s no gray area. All of this is manifested in the way we think about our research and what counts as good research, what counts as important research,” she said.

Gosnell is an assistant professor of physics at Colorado College, where she researches and teaches about stars

Gosnell has published dozens of articles as an astrophysicist over the past decade, including a series devoted to latecomer blue star systems (the first page of one is shown).

Gosnell was involved in a creative project, The Gift, an experimental play that humanized latecomer blue star systems

Gosnell has published dozens of articles as an astrophysicist over the past decade and was awarded the 2021 Cottrell Scholar Award for a combination of her research and teaching approaches.

Her work on the exclusive and exclusionary world of physics has been published at the American Institute of Physics and the American Physical Society.

More recently, she has been involved in a creative project, The Gift, an experimental play that humanized blue stragglers and made comparisons between star-human lifespans and interactions.

The artwork is experienced in a room and includes sound and video to narrate a star’s death. The installation opened at the New York Public Library on December 6 but will be relocated to Colorado College sometime in 2023.

https://www.dailymail.co.uk/news/article-11642707/Colorado-astrophysicist-moans-field-riddled-white-supremacy-sexism.html?ns_mchannel=rss&ns_campaign=1490&ito=1490 The Colorado astrophysicist groans her field is riddled with “white supremacy” and sexism