A doctor has busted some common health myths – and explains why, contrary to popular belief, you don’t need to drink eight glasses of water a day or clean your ears.

dr Sara Kayat appeared on tonight’s episode of This Morning to separate health advice from fiction during a segment with presenters Rochelle Humes and Vernon Kay.

She tackled a list of 10 myths, including that cracking your knuckles doesn’t cause arthritis and why you don’t have to have a period on the pill.

Other myths she debunked were the “five second rule” and whether you really need to treat warts. 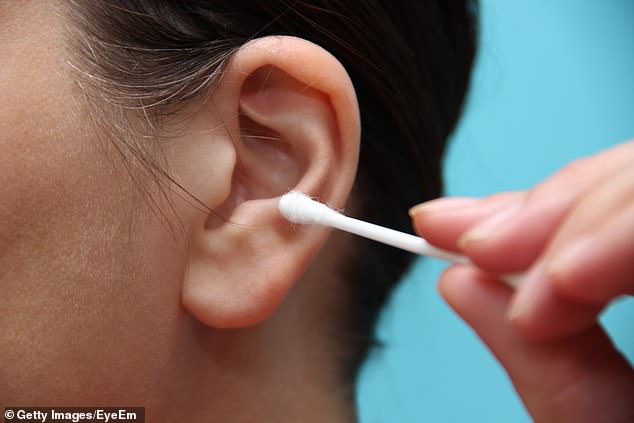 We don’t need to clean our ears, says Dr. Sara saying they are self-cleaning and that using objects like cotton swabs can damage them

1. You don’t need to clean your ears

according to dr Sara: “Our ears are so wonderfully self-cleaning. They have these little hairs that pulsate and push out the wax. So you don’t have to push anything in to clean it.’

She added that every time you stick a cotton swab in your ear, you risk damaging the small hairs and layer of skin that can lead to infection.

In addition, you can also accidentally perforate or rupture the eardrum.

Finally, Dr. Sara on why we shouldn’t try to remove all of the earwax: “We need earwax. The wax is good, it catches the debris.’

Those on the pill don’t need to take a break every 21 days, according to the doctor, who said bleeding during those breaks isn’t a real period

2. You don’t have to have a period with the pill

dr Sara said you don’t need a period if you’re on the pill, adding that bleeding after 21 days isn’t a real period.

“So if for some reason you don’t want to have those seven days of bleeding, you don’t have to,” she said, explaining that you can have two packets in a row.

“You could take [the pill] for three months and then you have a period if that’s what you prefer,” she said.

“Or if you definitely want a period every month but you’re like, ‘Actually, I don’t like seven days,’ cut it short.”

dr Sara’s advice when it comes to treating your child with a fever is “treat the child, not the fever.”

3. You don’t have to lower your child’s fever

dr Sara said, ‘I always say treat the child, not the fever… Fever is our body’s response to fight infection and by bringing that fever down you can limit your body’s ability to fight it so quickly.’

She noted that if your child is distressed or unwell, you should try to make them feel better.

But she reiterated, “I think it’s really important to look at your kid and not the number.”

4. Warts don’t need to be treated

Warts, although uncomfortable, are just viruses, according to the health expert.

She said: “As we know. Our body is able to get rid of viruses on its own. [For] some people, it might only last a few months.

“Other people can take years, and of course if they really frustrate you, you can do treatments…but you don’t have to.” They will eventually go away on their own in most people.’

The number eight is completely arbitrary when it comes to how much people should be drinking each day, said Dr. Sara

5. You don’t have to drink eight glasses of water a day

while dr Pointing out the importance of staying hydrated, Sara described the number eight as “a completely arbitrary number.”

“I can’t find any evidence as to why everyone should be specifically drinking eight glasses a day,” she said.

dr Sara added that other factors influence water needs, including the temperature in your area.

6. Watching TV in the dark isn’t bad for your eyes

Although many people think that watching TV in the dark is bad for their eyes, Dr. Sara that this is not the case.

according to dr Sara doesn’t actually interact with all antibiotics, although she said it’s generally better for you not to drink while taking antibiotics, as alcohol can suppress your immune system

7. You can drink alcohol with certain antibiotics

dr Sara said it’s generally better for you not to drink while taking antibiotics because alcohol can suppress your immune system.

However, she said most common antibiotics we take don’t interact with alcohol.

“People worry about it [the medication] becomes less effective if you drink. That’s not the case,” she said, noting that people should ask any questions to their GP.

To catch a cold, a virus must be present, the doctor said. So just being alone in a cold environment won’t give you any

Although many people believe that walking in cold weather can cause a cold, according to the doctor, this is not true.

She said: “If you go outside in cold weather, you won’t catch a cold.

“You have to have a virus there to actually catch a cold. So just being in a cold environment is not the reason you catch a cold.’

Despite the persistent myth that cracking joints don’t cause arthritis, the doctor says it doesn’t.

She said: “People think … it’s the joints and bones rubbing together that’s making that sound, but it’s actually just a little bit of gas, a gas bubble between the joints.

‘When [you crack your knuckles], it kind of pops out and it doesn’t damage your joints. Of course, if you get pain, swelling or something similar at the same time, it can be something serious.

Under the “five second rule,” food that has fallen on the floor can be eaten – as long as you pick it up within that time frame.

But like Dr. Sara explained, that’s not entirely true.

“Yes, the longer [the food is on the floor]the more likely it will come in contact with bacteria,” she said.

“But that’s what it’s there for [even just] a second, it’s still likely to get a few germs and your kids survived.