British Vogue Editor-in-Chief Edward Enninful has claimed he can’t hail a cab because the color of his skin causes cab drivers to refuse to stop.

Enninful, whose famous friends include Kate Moss and Naomi Campbell, says he still has to ask his assistant – who isn’t black – to hail a car for him.

The Ghana-born fashion director is no stranger to alleged racial profiling.

A security guard at Enninful’s Mayfair offices was sacked in 2020 after refusing him entry into Vogue House. To add insult to injury, the guard told him to use the vendor entrance at the back of the building.

The latest allegations come after Enninful, who turned 50 in February, revealed last week that he had spent 14 years with Alcoholics Anonymous and was estranged from his father for 15 years.

The editor, who married longtime partner Alec Maxwell earlier this year and will publish his autobiography on Tuesday, also expressed fears of losing his sight after having four surgeries on his eyes in recent years. 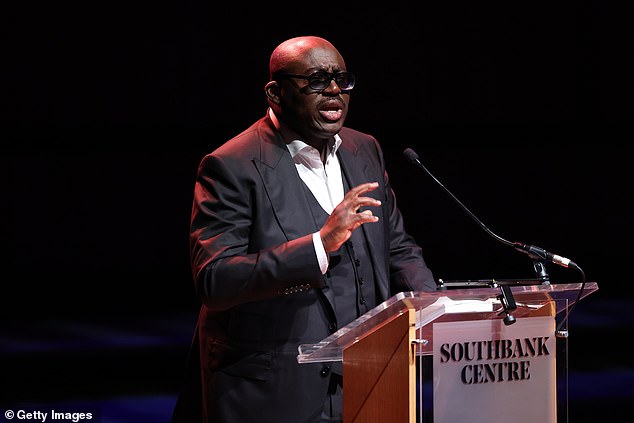 Enninful has claimed that taxi drivers racially profile him and force him to have his assistant flag down cars for him.

“My assistant still has to hail a cab – despite the position I’m in,” he said, speaking outside the BFI Southbank in London to promote his memoir A Visible Man.

“I am a black man in the world; It wasn’t the first time it happened and it won’t be the last.”

In 2020, Enninful had revealed he had been the victim of “racial profiling” in his own office.

The editor claimed he was refused entry to Vogue House in Mayfair by a security guard who did not appear to recognize him.

He later confirmed the security guard was immediately fired by bosses at Conde Nast, the magazine giant that owns Vogue.

“When these incidents happened, I realized: don’t forget who you are, don’t forget where you’re from, and don’t think that you’re so amazing that these things won’t touch you,” Enninful said at the promotional event, the a party at Claridge’s followed.

There was speculation that the Duchess of Sussex could attend, but she was notable by her absence. Meghan was guest editor for Vogue’s September 2019 issue.

Enninful, who is pictured with Michaela Coel on Sunday while promoting his forthcoming memoir, says he still has to ask his assistant – who is not black – to hail a car for him

Enninful, who was born in Ghana but grew up in west London, became the first non-white person to be appointed editor-in-chief of Vogue in 2017.

His arrival sparked a mass exodus of staff, including deputy editor Emily Sheffield, the daughter of a baronet and sister-in-law to David Cameron, who lost the top job.

After succeeding Alexandra Shulman in 2017, the former stylist reportedly said his priority was “getting rid of the posh girls.”

Today he says of Shulman: “She represented a different time. In 25 years there have only been 12 color models on the front page.

“I just thought, ‘Let me bring a new world, let’s create a magazine that’s inclusive and where everyone can find themselves.’

Ahead of the release of his memoir, Enninful has opened up about the struggles of his life, including his battle with alcoholism and how he’s had four eye surgeries in the last few years.

He explained that a retinal detachment, among other things, led to him having to undergo the procedures – and during the recovery period he had to live in the dark looking at the ground for several weeks.

Edward also addressed rumors that he could take over as editor of American Vogue if Anna Wintour, who has held the post since 1988, steps down

He described the recovery as “psychologically intense”, explaining that he has always had problems with his eyesight.

He told the BBC’s Amol Rajan last week: “But what I’ve also learned is… you don’t need perfect vision to create something. You don’t need 20/20 vision to see pictures.

“So that’s the irony: even though I have poor eyesight, I can still create images that people can relate to.”

In addition to suffering from vision problems, Enninful also has the blood disease thalassemia, which flares up and causes him pain.

As a child living in Ghana, he had to undergo multiple blood transfusions before finally moving to the UK at the age of 13 amid political unrest in the country.

His mother, who had run a tailoring business, decided to stay in Ghana for a while after a young Enninful, his father and five siblings moved to Vauxhall, south London, where they lived with his aunt.

Enninful’s father, who had been in the Ghanaian military, spent three years seeking asylum in Britain.

When he was 16, Enninful was spotted on public transport by stylist Simon Foxton, who told him he could become a model, and he started shooting with photographers for iD magazine.

After assisting the magazine’s fashion director Beth Summers, Enninful gained more experience and when Summers left her position just before the model’s 18th birthday, he was asked to step into her role and become the youngest-ever fashion director for an international to become a publication.

The job came at a price, however, as Enninful skipped classes at the University of Goldsmiths to pursue his career. When his father found out, he threw him out of the house and the couple didn’t speak to each other for 15 years.

Edward, who married his longtime partner Alec Maxwell in February this year, also spoke about being estranged from his father for 15 years

A-list pals including Naomi Campbell, Kate Moss and Victoria Beckham gathered at Longleat House – the home of Enninful’s close friend Emma Thynn, the Marchioness of Bath – to see Edward and video producer Alec in an intimate tying the knot in a ceremony in the Orangery (above). )

During the interview, Enninful also revealed that he had struggled with depression his entire life and had been part of Alcoholics Anonymous for 14 years, where he said he found “community.”

The editor said: “It got very bad because just imagine how I felt, you know – I lost a home, which is Africa, and came to England.

“Then I lost a second home when I was kicked out. And then I went into the gay scene and I thought I found my tribe and again I got so many rejections.

Enninful eventually found love in his longtime partner, creative director Alex Maxwell, and the couple tied the knot in February this year.

A-list pals, including Naomi Campbell, Kate Moss and Victoria Beckham, gathered at Longleat House in Wiltshire – home of Enninful’s close friend Emma Thynn, the Marchioness of Bath – to watch Edward and video producer Alec make each other tied the knot in an intimate ceremony at the Orangery before partying the night away.

The star-studded wedding coincided with Enninful’s 50th birthday. He is pictured with a handful of his loved ones for dinner in Laylow, west London (pictured).

The wedding is believed to have cost at least £600,000, according to events experts, but Edward could have received favors from friends including use of the historic wedding venue, which is believed to have been a wedding present from Emma and her husband, the 8th Marquess of Bath.

After partnering with Meghan Markle, who was guest editor of British Vogue in 2019, Enninful put an end to rumors the Duchess of Sussex had asked for the publication to be delayed so the American media would see the issue first.

He claimed “no one really interfered with the release process”.

Enninful also addressed speculation about whether he would be following in the footsteps of colleague Anna Wintour, 72, to take over the helm of American Vogue when she eventually steps down after first taking over as editor in 1988.

Although he said he was “so lucky” to direct British Vogue, he added: “You never know what the future holds.”

https://www.dailymail.co.uk/news/article-11183005/British-Vogue-editor-chief-claims-taxi-drivers-not-stop-skin-colour.html?ns_mchannel=rss&ns_campaign=1490&ito=1490 The editor-in-chief of British Vogue claims taxi drivers won’t stop for him because of the color of his skin