An engineer who was dumped by his girlfriend after she won the lottery has told how he now fears she will also take away his beloved dogs.

Miss Hoyle, 40, was seen yesterday walking the former couple’s two Cocker Spaniels, Teddy and Barney, near their new home in Linby, Nottinghamshire, before handing them over to Kirk – as part of a joint custody agreement.

But Mr Stevens says he is concerned she will fight him for sole custody of the dogs.

“The only communication we have now is through the dogs,” he said. “We both own them and share time with them. I may not have lottery money, but at least I still have the boys. 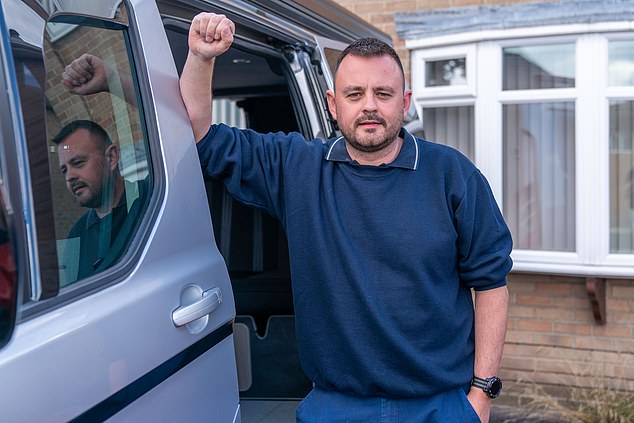 Kirk Stevens has been dumped by his girlfriend Laura Hoyle after she made £10,000 a month over the next 30 years

“These dogs mean the world to me and for now we share them together. We’ve had them for over three years.

“Hopefully she never takes them away from me, I couldn’t take it. It hurts to lose the money we won together, but it would hurt even more to lose the dogs.’

Last week, Mr Stevens told how he and Miss Hoyle won the jackpot in the National Lottery’s Set For Life draw in March last year – a total of £3.6million spread over 30 years.

Mr Stevens said he met Miss Hoyle through a friend in 2018 and she then moved into his three-bedroom home in Hucknall, Nottinghamshire

What is Set for Life?

Set For Life is a draw game by The National Lottery.

The Set For Life game costs £1.50 per line and is drawn every Monday and Thursday.

After the life-changing victory, Mr Stevens said he had let Miss Hoyle live with him rent-free in his £240,000 three-bedroom house and they celebrated with a trip to Disneyland Paris.

She quit her job as a Hermes driver and they had planned to set up a ghost hunt together – a shared passion of theirs.

But ten weeks ago she decided to leave him.

She moved out of his flat and into the five bedroom dream house they had chosen together in the pretty village of Linby.

Ironically, Mr Stevens says he even helped his ex move into the new home he believes they chose together and has never set foot in it since, having left him for a life of luxury without him.

He said: “I couldn’t get her to stay when she said she didn’t want me so I helped her undress to help her.

“She took the bed from the guest room, wardrobes and some furniture that she bought and all her clothes.

‘She got a moving truck and I helped her get her things out. It was about 10 weeks ago and she moved straight into the new house that should have been ours together.

Mr Stevens helped his former partner move out of his home into the luxurious red brick house he thought they would share together, where she now resides on her own. He said he was completely cut off from the jackpot money

“I may not have lottery money, but at least I still have the boys,” Mr Stevens said. Pictured Mrs Hoyle walking her dogs

Mr Stevens said: “I hope she never takes them away from me, I couldn’t take that.” Pictured Ms Hoyle walking her dogs

Mr Stevens admitted their relationship “wasn’t perfect” before the split. “There were a few problems towards the end but that’s the way it is,” he said. “But I’m feeling badly done with the house, why wouldn’t you?”

He argues that he should receive a share of the profits – but although both names appeared on the novelty promotional check, the ticket was purchased in Miss Hoyle’s account and she claimed the prize.

A Camelot spokesman said that despite both names on the large check used for publicity, all lottery winnings are paid to an individual, even in a syndicate, and in this case the winning account was Laura’s.

https://www.dailymail.co.uk/news/article-11169005/Ex-boyfriend-lottery-winner-40-scooped-10-000-month-jackpot-fears-shell-DOGS-away.html?ns_mchannel=rss&ns_campaign=1490&ito=1490 The ex-boyfriend of the 40-year-old lottery winner, who hit a £10,000 monthly jackpot, fears she will take away DOGS