In the fall of 2022, FBI agents raided a Manhattan building allegedly being used as a secret Chinese police station and manned by “illegal cops” solving crimes.

The raid took place at the headquarters of the American Changle Association, a nonprofit organization that helps Chinese nationals living in New York. The group’s former chairman was Lu Jianshun, who donated $4,000 to Eric Adams’ mayoral campaign in 2021, the New York Times reports.

The police station was on the third floor of the organization’s building. The police unit is associated with a unit code called 110 Overseas and is based in China’s Fujian Province.

US Attorneys, who were involved with the FBI in the raid, told DailyMail.com “no comment” when asked to corroborate the Times story.

In October, DailyMail.com visited the office, which is on top of a ramen shop and next to an acupuncturist, where a receptionist was surprised to hear it was a secret police station. It was closed and locals said it was rarely open 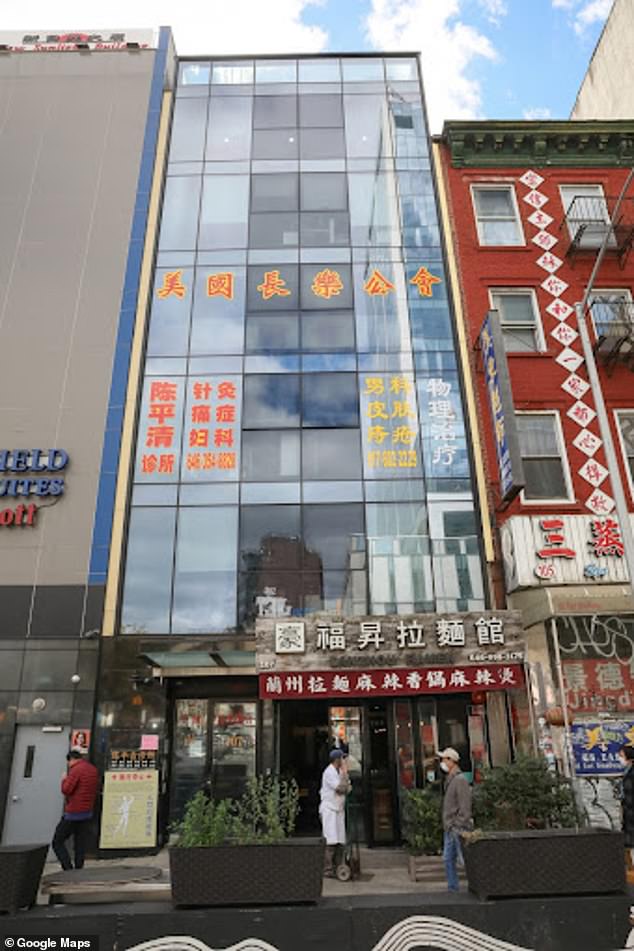 The American Changle Association on East Broadway in downtown Manhattan was raided in the fall of 2022. The suspected police station was on the third floor

The raid took place at the headquarters of the American Changle Association, a nonprofit organization that helps Chinese interests in New York. The group’s former chairman was Lu Jianshun, who donated $4,000 to Eric Adams’ mayoral campaign

The public was made aware of the existence of the secret Chinese police stations by reports from the Europe-based human rights organization Safeguard Defenders, which released a research study in September listing more than 100 secret Chinese law enforcement agencies worldwide.

The Times report notes that it’s not clear whether Lu Jianshun, also known as Jimmy Lu, is a target for the Feds.

The article made no mention of arrests after the raid but said materials had been confiscated from the offices.

In October 2022, Mayor Eric Adams performed at an American Change Association gala, reports the New York Post. Just a few months earlier, the group had its tax-exempt status revoked by the IRS.

The Times article adds that reports in China have described the operations as “overseas police service centers” that help solve crimes in their assigned countries without cooperating with local officials.

Workers from the American Changle Association outside their offices last year

In a statement to the Times story, the Chinese Embassy in Washington DC said, “You are not police personnel from China. There’s no reason to make people nervous about it.’

In response to previous reports of secret police stations, Chinese embassies and consulates have downplayed their existence, saying the offices merely help citizens renew documents such as driver’s licenses.

Around the same time as the raid, a secret Chinese police station in Ireland was ordered to close by government officials, while authorities in the Netherlands began investigating similar operations.

Many of the stations are open in Western Europe, only four in North America

Chinese President Xi Jingping, pictured Jan. 9, confirmed to the Chinese Embassy in Washington the existence of volunteer-run sites in the United States, but said they were not “police stations” or “police service centers.”

In November, Beijing dismissed claims it operated “police stations” on US soil and described the sites as voluntarily run, after the FBI director said in the same month he was “very concerned” about unauthorized stations linked to Beijing’s influence Operations were linked.

FBI Director Christopher Wray said at a Senate hearing in 2022 it was “outrageous” that the Chinese government would attempt to establish a police presence in the United States, saying it “violates sovereignty and circumvents the usual processes of the United States.” Cooperation between the judiciary and law enforcement”.

At the time, China’s embassy in Washington acknowledged the existence of volunteer-run sites in the United States, but said they were not “police stations” or “police service centers.”

Republicans in the US Congress, including Rep. Jim Banks, have requested answers from the Biden administration about the operations of the sites.

Rights activists say the sites are an extension of Beijing’s efforts to pressure some Chinese nationals or their overseas relatives to return to China to face criminal charges and linked them to activities by China’s United Front Work Department a Chinese Communist Party agency tasked with spreading his influence and propaganda overseas.

Mark Clifford, president of the Hong Kong Freedom Committee Foundation, said such stations must be “stopped”.

“By allowing the CCP to operate these types of institutions in their countries, international governments are complicit in Beijing’s actions,” Clifford said.

According to Safeguard Defenders, there are 102 foreign police stations in 53 countries, including 11 in Italy, the highest number of any foreign nation.

Chinese authorities have described the facilities as volunteer-run centers that help Chinese citizens renew documents and provide other services that have been disrupted during the COVID-19 pandemic.