A 22-year-old Canadian woman took her own life after battling Lyme disease “to get rid of the excruciating pain,” her father said in a heartfelt statement.

The illness “essentially kidnapped her,” said her father, Alain Champagne, CEO of Groupe Jean Coutu and Brunet, in a public LinkedIn tribute posted after her death.

Amelie Champagne battled the disease undetected for years, but persevered with her university studies and despite the pain, worked at a relief center for special needs children.

The disease, which can be transmitted through tick bites, had progressed well beyond the physical symptoms and was severely affecting her brain.

She was diagnosed positive in the US last year after years of wrestling with her condition. But it came too late to alleviate her symptoms.

Amelie has been a strong advocate for autism sufferers, as her Facebook profile shows. 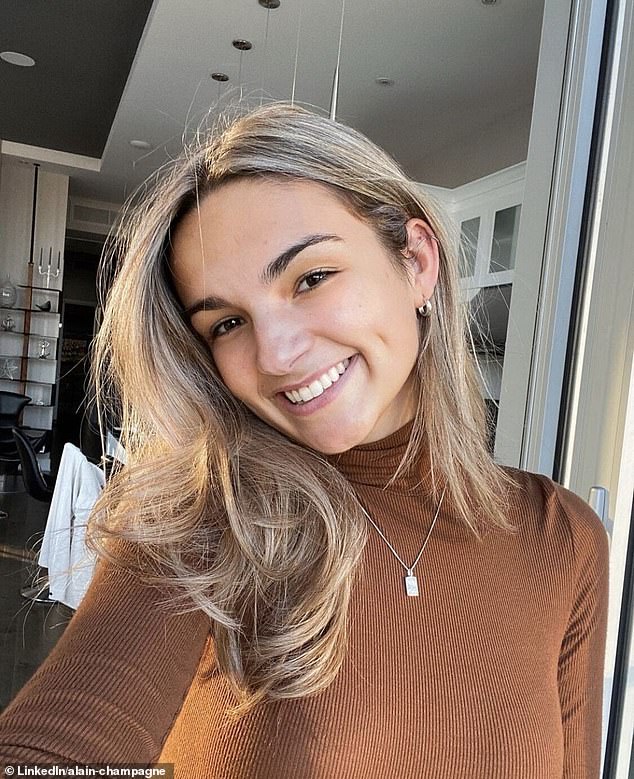 Amelie Champagne, 22, had started volunteering at a homeless shelter and helping disabled children despite battling undiagnosed Lyme disease for years

Her father, Lain Champagne, CEO of Groupe Jean Coutu and Brunet, shared a message on LinkedIn after his daughter took her own life “to relieve herself of the unbearable pain”.

“We are confident that she is now at peace and that her spirit shines brightly on the vast number of people she has touched during her brief stay with us,” Alain wrote.

The young woman had also begun volunteering at a homeless shelter near her parents’ home in the months leading up to her death.

What is Lyme disease?

According to the Centers for Disease Control and Prevention, Lyme disease is the most common vector-borne disease in the United States.

It is caused by the bacterium Borrelia burgdorferi, which is often transmitted by tick bites.

The tick-borne disease affects more than 200,000 people in the United States.

The earliest signs of Lyme disease are a bull’s-eye pattern rash and flu-like symptoms.

A round or oval rash around a tick bite can be an early symptom of Lyme disease in some people.

The rash can appear up to 3 months after an infected tick bite, but usually occurs within 1 to 4 weeks. It can last for several weeks.

The rash may have a darker or lighter area in the center and may gradually spread. It’s usually not hot or itchy.

The rash can be flat or slightly raised and appear pink, red, or purple when it occurs on white skin.

The rash can be harder to see on brown and black skin, and it can look like a bruise.

“The resilience and continued optimism she displayed while dealing with the ever-elevating symptoms has been and continues to be my greatest source of inspiration,” her father wrote.

“Despite the fact that at this stage every breath and every moment is painful, in her honor we will seek to live our lives at the same height that she lived hers.”

Although her illness had reached an unbearable level, she remained a vibrant member of her community, her father said.

He concluded, “We will always love you and cherish every memory of our wonderful time together. You made us all better people. Now it’s up to us to rise to the challenge…”

In the comments, people shared their own tragic stories with Lyme disease.

Antibiotics are usually prescribed to people who develop Lyme disease.

But those for whom prescriptions don’t work are referred to a hospital or clinic where they can receive stronger antibiotics.

Chronic Lyme disease is much more serious than the cases that are usually contracted.

The symptoms of chronic Lyme disease are similar to those of Lyme disease but are more severe. These include pain, fatigue, neurocognitive and behavioral symptoms.

It can also lead to other diagnoses, most of which are more neurological and rheumatological diseases.

If Lyme disease is left untreated, sufferers may experience severe headaches and/or neck stiffness, skin rashes, arthritis, loss of muscle tone on one or both sides of the face, palpitations, inflammation of the brain and spinal cord, shooting pain, numbness, or tingling in the hands or feet.

Pets can also contract the disease and show symptoms similar to humans. The disease is not contagious.