It’s been a rough 18 years for Essendon fans, with the club’s last final win coming in 2004 – and some cheeky footy fans broke the news with a hilarious classified ad.

The advert, which ran in a weekend newspaper, sarcastically congratulates the club on their 18th birthday since their last final win: an eliminator against the Demons on 4 September 2004.

The club would lose to Geelong the following week and have only reached the final six times since, falling each time.

It was a point not lost by three brave fans who ran a paid classified ad titled “Happy 18th Bombers!” 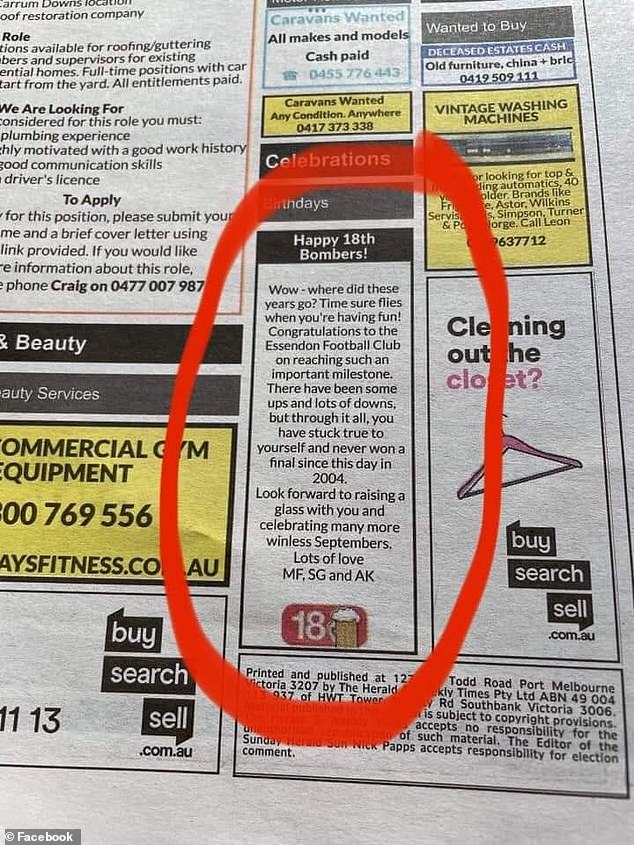 “Wow – where have those years gone? Time sure flies when you’re having fun! Congratulations to Essendon Football Club on reaching such an important milestone,” the ad said.

“There were some ups and a lot of downs, but through it all you stayed true to yourself and haven’t won a final since that day in 2004.

“Look forward to toasting with you and celebrating many more winless Septembers. Lots of love MF, SG and AK,” the ad ended.

Not everyone saw the funny side, however, and some Essendon fans vented their frustration.

“Pretty sad that all the people try to kick a racquet when it’s down, obviously everyone has the perfect racquet. Get a life as a keyboard bully,” wrote an angry Bombers fan on Facebook.

“Wow someone must have stolen their wife from a Bombers trailer to be so upset they’re paying $1500 for an ad,” wrote another fan, while one said, “Don’t worry I’m sure the Bombers.” win one before the saints (St. Kilda). At least your club doesn’t (have) no loser culture.”

“This is the most pathetic, meaningless joke there is,” ranted another Essendon fan.

It’s been a tough couple of decades for Essendon, having failed to win a final since 2004

Unfortunately, it’s simply a fact of football that the Bombers have a loser culture, with the 2011 drugs scandal further embroiling the club in a perpetual state of turmoil – although fans are reluctant to admit it.

One Footy fan pointed out: “We have noticed that Essendon fans here take themselves very seriously and have no sense of humour,” while many said the club’s “21st” birthday was coming soon.

There’s an entire Twitter account dedicated to counting down the days since the Bombers won a final, and it also celebrated its 18th birthday.

A big thank you to everyone for the birthday wishes, I still can’t believe I’m 18… time flies when you lose the final!

Couldn’t have done it without you @essendonfc… to the next 18 years 🍻🍻 pic.twitter.com/L6U7NgyiKd

It’s been a miserable year for the club in 2022, winning just seven games and losing the last four games by averaging 56 points, with three of those losses coming to teams who didn’t even make the eight.

This resulted in manager Ben Rutten being sacked just before the final game of the season, with both Essendon and non-Bombers footy fans slamming the club for his treatment, despite the side finishing a low 15th after the final in 2021 .place occupied.

The brutal ax seemed to inspire another cheeky footy fan to apply for the vacant coaching position at Airtasker, asking for the princely sum of $5 for the role.

“I have very little experience other than coaching an under-12 cricket team all the way down,” says the cheeky application.

“I can’t guarantee success, nor can I be sure the players will accept my game plan, but from my understanding it’s not necessarily a requirement of the job.

“I also have some friends who know some people who they met in an alley off King Street who believe they have a legitimate performance enhancement program that will have the boys fired in the blink of an eye,” the ad ended .

It was a cunning crack in the club’s nutritional supplements scandal that saw 34 players and manager James Hird banned for two years after they were found guilty of ingesting illegal substances given to them by controversial sports scientist Stephen Dank.

Even as Essendon manages to sneak into the finals, loser habits resurface.

Club great Terry Daniher slammed the club culture on Saturday, saying their soul was lost the day they moved from spiritual headquarters Windy Hill to their current home, The Hangar in Tullamarine.

“To see them in the state they are in, you just can’t help but feel with the players,” Daniher told SEN.

“When we left Windy Hill and moved to Tullamarine, a lot of Essendon stayed in Windy Hill, it didn’t follow Tullamarine.

“Ben Rutten and a few others tried really hard to instill that culture in the players, but it just wasn’t the same, there’s no one there who has had real experience.

“They looked like a sad case towards the end of the year but I’m sure they will recover, they just need some good leaders there,” said Daniher of the club’s lack of leadership and culture.

Essendon has yet to announce their manager for 2023 and beyond, although surprisingly and controversially, many club figures are reportedly keen on bringing Hird back despite his role in the supplement scandal.

The current skipper is believed to have already played his last game for the club, with the likes of Andrew McGrath and Zach Merrett needing to make a big step forward to see the side through this dark period.