Lisa Marie Presley has lived a varied life of ups and downs, stepping out of her famous father’s shadow.

Her journey ended with her tragic death on Thursday January 12th. The singer was found unresponsive in her bedroom and went into cardiac arrest.

After her ex-husband Danny Keough performed CPR on her, paramedics were initially able to get her heart working again, but she died hours later, according to TMZ.

“It is with a heavy heart that I share the devastating news that my beautiful daughter Lisa Marie has left us,” Lisa’s mother, Priscilla, said in a statement.

“She was the most passionate, strong and loving woman I have ever known. We ask for privacy as we try to deal with this profound loss,” she continued. “Thank you for the love and prayers. There will be no further comment at this time.’

The daughter of Elvis and Priscilla Presley pursued her own celebrated musical career as a singer and released three popular albums.

She has had several high-profile romances along the way, including marriages to Michael Jackson and Nicolas Cage.

She also suffered terrible heartbreak in 2020 when her son, Benjamin Keough, died by suicide.

Below, DailyMail.com takes a look at Presley’s epic life in pictures. 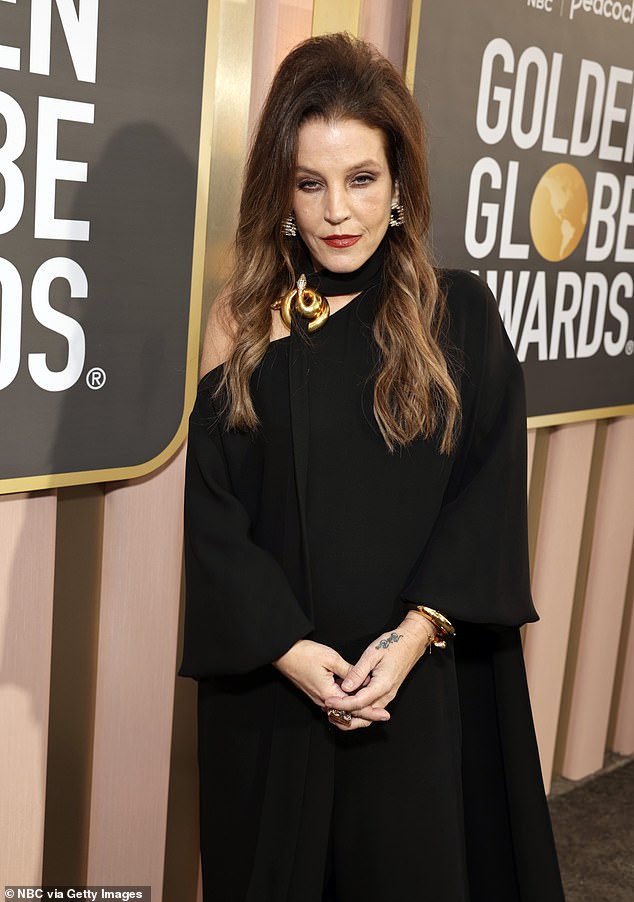 Finding her way: Lisa Marie Presley, 54, is seen through her life in pictures as she stepped out of her father’s shadow; Seen January 10th in Beverly Hills

Baby girl: Lisa was born on February 1, 1968 to legendary rock and roll singer Elvis Presley and his wife Priscilla; Picture four days after her birth

Family dissolution: Lisa’s parents divorced in 1973 and her father died four years later in 1977; pictured around 1970

Fallen King: Elvis is said to have died of cardiac arrest, although his prodigious drug use in his later years has also been suggested as a factor; pictured around 1970

Inheritance: After the death of her father, Lisa became joint heir to his Graceland estate, and after the deaths of her grandfather and great-grandmother, she became the sole heir; seen around 1970

First Husband: In 1988, Lisa married musician Danny Keough, although they later quickly divorced in 1994 in the Dominican Republic; seen in Los Angeles in 1991

Reunion: Lisa first met Michael Jackson in 1975 when she was a seven-year-old girl attending one of his concerts. The two rekindled their friendship when she came of age in 1992; seen in 1995

Support: In 1993, Jackson reportedly relied on her support after the first of several child molestation lawsuits were filed against him; seen in 1995

The ending: Presley filed for divorce from Jackson in 1996, citing irreconcilable differences, though she later revealed that she tried to reconcile multiple times over the following years

Moving on: Presley’s third marriage was to Nicolas Cage in August 2002; seen in 2001

In and Out: The union was short-lived, however, and Cage filed for divorce just three months after they tied the knot; pictured in June 2002

Following in her father’s footsteps: In the early 2000s, Lisa started her music career in earnest. She went on to release three critically acclaimed and commercially successful albums with brief success; seen in 2013

Artist Family: Their daughter Riley later became an actress known for her appearances in acclaimed independent films and award winners; seen together

New love: Lisa’s fourth marriage – in 2006 – was to Michael Lockwood, who had played her guitar and served as her music producer and director; seen in 2007

Snappy: She filed for divorce in 2016 and later claimed she found child pornography on Lockwood’s computer. They share fraternal twin daughters Harper and Finley, 14; seen in 2013

Tragedy: On July 12, 2020, Lisa’s only son Benjamin died by suicide. Two years later she wrote an essay about her endless grief

Family pride: Lisa, her mother Priscilla and their three daughters joined forces to celebrate their family and their late father in 2002 following the release of Baz Luhrmann’s acclaimed biopic Elvis

Ending Together: Lisa seen with mother Priscilla in 2006 in Memphis, Tennessee. Priscilla rushed to be by her daughter’s side at the hospital and later confirmed her death in a statement

https://www.dailymail.co.uk/tvshowbiz/article-11629773/Lisa-Marie-Presleys-life-pictures-daughter-Elvis-Presley-earliest-days.html?ns_mchannel=rss&ns_campaign=1490&ito=1490 The life of Lisa Marie Presley in pictures: the daughter of Elvis Presley since her earliest days