A Morgan Stanley banker is suing his estranged wife for $7 million, alleging she forced him out of his job by harassing him with abusive emails his bosses had access to and falsely accusing him of sleeping with prostitutes and thereby contract sexually transmitted diseases.

Jean-Charles Beriau, 47, and his estranged orthodontist Thea Shive, 65, are in the midst of a bitter divorce battle on Long Island.

He claims that after their marriage fell apart in 2018, she emailed him while he was at his old job at Merrill Lynch, falsely accusing him of sleeping with prostitutes.

She also allegedly contacted his new clients, telling them he was under investigation for securities fraud. 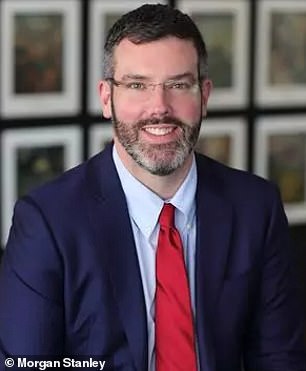 Jean-Charles Beriau, 47, and his estranged orthodontist Thea Shive, 65, are in the midst of a bitter divorce battle on Long Island. Shive is shown at right in 2014

In the emails, Shive – who previously ran an orthodontic practice in Queens – also claimed he was seeking treatment for “herpes, syphilis, trichomoniasis and various other problems,” according to documents obtained by the New York Post.

Because his bosses had access to his email, as is common in finance, he says the allegations forced him to leave.

He also claims they launched an investigation at his new place of work.

It is unclear what led to their divorce.

The couple married in 2005 and lived in exclusive Oyster Bay, an affluent Long Island suburb, in a modest home near the water.

Beriau’s lawyer has pleaded with a judge to help them resolve the divorce amicably, but says his wife continues to abuse him despite an order prohibiting her from contact.

Beriau in one of his many hunting trophy photos. He frequently travels to Africa to hunt big game

The couple lived together in Oyster Bay, Long Island. Her parents’ house is shown in the picture

In one of the emails, she reportedly told him: ‘[It] Apparently you don’t want a divorce and you drag it out endlessly.

“I will never take you back, you are disgusting. I know you have bipolar disorder and traumatic brain injury and are unable to think rationally.’

In another, she spat, “There is no greater proof of your serious mental illness than the fact that you continue to use my address when seeking treatment for STDs.”

His lawyer argued in court that the emails were filled with fabricated claims.

“The content of the emails was entirely fabricated and false.

“Those emails to him were out of left field. And he’s a very patient, very professional gentleman who thought this would de-escalate, but it didn’t,” said Karen McGuire, his attorney.

“He wanted to respectfully separate from his wife. It didn’t have to go that way, but it did,” she added.

A Flicker account shows Beriau, an avid big game hunter, posing with some of his prey while traveling to Africa.

Neither Shive nor her attorneys have commented on his court claims.

Beriau worked at Merrill Lynch for 16 years before joining Morgan Stanley in May last year.

https://www.dailymail.co.uk/news/article-11661583/Morgan-Stanley-banker-claims-wife-harassed-false-STD-prostitution-claims.html?ns_mchannel=rss&ns_campaign=1490&ito=1490 The Morgan Stanley banker claims his wife harassed him with false claims about sexually transmitted diseases and prostitution

How to get three TOTY Honorable Mentions