The full story behind Michael Clarke’s alleged invitation to his ex Pip Edwards to accompany him on his upcoming work trip to India is beginning to emerge.

Wild footage of a heated exchange of blows between Clarke and his girlfriend Jade Yarbrough at a public park in Noosa was leaked on Wednesday, with Yarbrough accusing the former cricketer, 41, of sleeping with Edwards behind her back on December 17.

Yarbrough, 30, also accused Clarke of texting Edwards, 42, to tell her she was the “love of his life” before inviting her on his visit to India, which is scheduled for next month.

Little was known of Clarke’s travel plans or forthcoming commentary commitments before his trip to India was mentioned in the now infamous video, captured by a shocked viewer on January 10.

If Yarbrough is right and asked Clarke Edwards, co-founder of activewear brand PE Nation, to accompany him to India, then he seems to have been looking for company on his business trip. 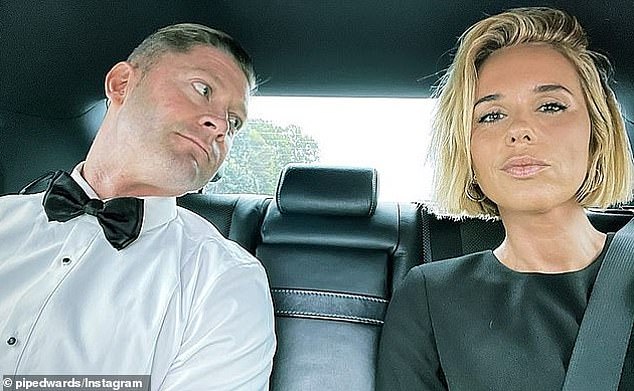 Clarke’s six-figure commentator role could be in jeopardy after the footage leaked as the Board of Control for Cricket in India (BCCI) is now reviewing his position.

Australia are due to face India in a series of four Tests from February 9 and Clarke was due to fly out to be part of the BCCI’s commentary panel, which would be heard on Fox Sports.

He had been approached to comment on the first two Tests against Australia, with an alleged payday of $150,000 plus expenses.

But News Corp is told sources in India believe Clarke could be blocked by image-conscious BCCI.

Little was known about Clarke’s forthcoming commentary duties in India before his trip was mentioned in the now infamous video of his Noosa brawl, captured on January 10

Clarke’s trip to India was mentioned by Yarbrough in their explosive altercation when she accused him of wanting to accompany Edwards on the trip.

“You want to send her to India?” Yarbrough screams in the vision.

On Wednesday night, dramatic footage made available to the Daily Telegraph showed a shirtless Clarke being yelled at and hit by his angry girlfriend Jade.

Others in the group, including Karl Stefanovic, his partner Jasmine, who is also Jade’s sister, and famed accountant Anthony Bell, try to defuse the commotion.

In the video, Yarbrough (right) accused Clarke (left) of texting Edwards, 42, to tell her she was the “love of his life” before inviting her on his trip to India, which is scheduled for next month is planned

If Yarbrough is right and Clarke asked Edwards, then he seems to have been looking for company on his business trip. (Pictured: Yarbrough beats Clarke in January 10 video)

The melee was over Edwards, and Yarbrough accused Clarke of cheating on her.

The video begins with her yelling at Clarke before slapping him in the face and pushing him away after the cricketer insists he hasn’t cheated on her.

‘Am I wrong? I’m damn wrong! You are a fucking liar. i can see everything You called her,” she yells, apparently referring to messages between Clarke and Edwards.

Clarke then tries to reassure Yarbrough that he didn’t leak with Edwards on December 17, saying he was with Bell that night.

Clarke’s six-figure commentator role could be in jeopardy after the footage leaked as the Board of Control for Cricket in India (BCCI) is now reviewing his position. (He is pictured in his previous role as a Channel Nine commentator with the late Shane Warne in December 2016.)

He then swears on the life of his daughter Kelsey Lee that he did not cheat on her, but Yarbrough refuses to believe Clarke’s protests, claiming she spoke to Edwards.

“You’re damn king to lie to me. You are a piece of shit. I just spoke to her. What’s wrong with you?’ She says.

Clarke again denies sleeping with Edwards and replies, “No, I didn’t. you can hit me That’s not true, that’s not true.’

In the video, Clarke repeatedly denies sleeping with Edwards: “No, I didn’t. you can hit me That’s not true, that’s not true,” he says. (Pictured: Clarke and Edwards in October 2020)

Edwards (left) had none of the drama when she returned to her home in the eastern suburbs late Wednesday night. “It’s not my circus. Once again, Michael in his true nature has not taken responsibility for his actions and I have been openly lied to,” she told Daily Mail Australia

He appeared to have injured his hamstring in the melee after being knocked to the ground by Yarbrough when he was seen limping through the public park.

As she is led away, Jade is heard crying as she turns to Clarke and howls, “I f**king hate you.”

The ugly altercation happened in front of young children nearby, according to stunned witnesses.

According to stunned witnesses, Clarke’s ugly altercation unfolded in front of young children nearby. Clarke has since apologized for his role in the scuffle

Clarke has since apologized for his role in the Noosa brawl, telling the Daily Telegraph that he took full responsibility for the incident and was shocked by his actions.

“I am absolutely disappointed that I have brought into this position people I value most in this position. My actions leading up to this altercation were nothing short of shameful and regrettable,” he told the publication on Wednesday.

Daily Mail Australia has reached out to all other stakeholders for comment.

Meanwhile, Edwards had none of the drama as she returned to her home in the eastern suburbs late Wednesday night after attending Elton John’s Farewell Yellow Brick Road concert at Allianz Stadium in Moore Park.

“It’s not my circus. Once again, Michael in his true nature has taken no responsibility for his actions and I have been openly lied to,” she said in a statement to Daily Mail Australia.

Clarke’s relationship with his ex-partner Edwards began in June 2020 following his split from his wife Kyly Clarke (née Boldy), which they announced four months earlier.

The former couple called it quits in December 2021.

Adjutant who may be responsible for Joe Biden's fiasco fiasco got the job through HUNTER.