A second Qantas plane within minutes was forced to turn around due to mechanical problems shortly after takeoff, marking the airline’s fourth mid-air diversion in just three days.

Flight QF1516 from Melbourne to Canberra was forced to turn back after pilots noticed a problem with the Boeing 717’s landing flaps.

The plane took off from Melbourne Airport at 10:10 am and was in the sky for just 17 minutes before returning and landing at 10:27 am.

It came just minutes after the pilots of flight QF430 from Melbourne to Sydney were made aware of a “minor engine problem” and turned the plane around.

The Boeing 737 took off from Tullamarine Airport at 9.28am before completing a large loop and returning just 50 minutes later at 10.18am.

A Qantas spokesman told Daily Mail Australia that customers on both diverted aircraft were to be rebooked on other flights in the hours that followed.

“The plane landed normally – this was not an emergency or priority landing. Both engines remained operational throughout the flight,” they said of the maiden flight.

It comes just after Qantas flight QF144 from Auckland to Sydney was forced to issue an emergency call mid-air on Wednesday, halfway through the three-hour journey.

Then on Thursday, flight QF101 was forced to return to Sydney Airport after experiencing a “potential mechanical problem” en route to Fiji. 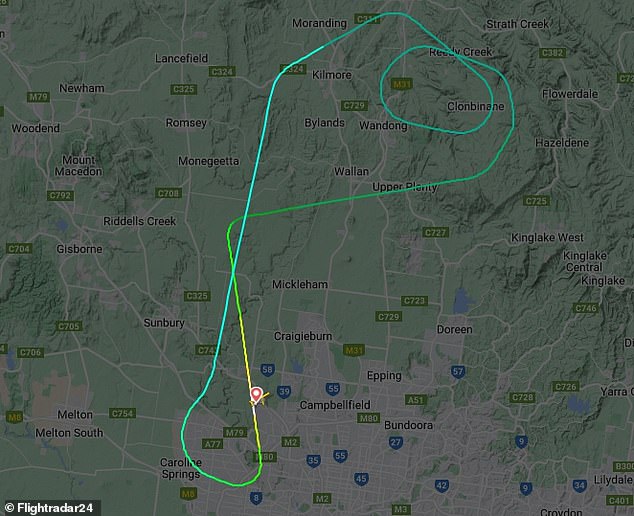 Flight QF1516 from Melbourne to Canberra was forced to turn back after pilots noticed a problem with the doors of the Boeing 717 (pictured is the plane’s route on Friday morning).

It comes after Qantas flight QF144 (pictured) from Auckland to Sydney was forced to issue an emergency call mid-air on Wednesday, halfway through the three-hour journey

Flight QF144 from Auckland to Sydney had to issue an emergency call midway.

Flight QF101 from Sydney to Fiji was forced to turn around after experiencing a “potential mechanical problem”.

Flight QF1516 from Melbourne to Canberra was forced to turn back after a problem with the landing flaps.

Flight QF430 from Melbourne to Sydney turned around after pilots noticed a “minor engine problem”.

Passengers on Wednesday’s flight from Auckland have since revealed they heard a loud bang as the left engine failed in mid-air.

Fortunately, the majority were unaware of the problem until they landed at Sydney Airport and were greeted by a barrage of reporters.

The first travelers to disembark the plane said they weren’t told the 747-800 suffered an engine failure, but that there was some kind of problem after the loud bang.

Passenger Simone Schmidt told the media: “We were told nothing had happened, they were absolutely professional and we only found out once we were back on land.

“All I heard was a pop and maybe a slight tremor, but that was it. We had no idea at the time, we didn’t realize that the whole engine had failed, we just heard a bang.”

Her husband Colin added: “There were a few gasps when they told us when we were back on the runway but by then we had already landed.

“Even then they told us it was a minor malfunction.”

Another woman named Georgia said: “You wouldn’t have known anything was really going on. We had no idea what happened, it was good.’

A passenger named Layla added: “A lot of people said they noticed something and I thought I heard something but not recognizable.”

The Boeing 737 departed Tullamarine Airport at 9:28am before completing a large loop, returning just 50 minutes later at 10:18am (pictured a Boeing 737 at Sydney Airport).

Georgia, left, said: “You wouldn’t have known anything was really going on.” Meanwhile, an Englishwoman (right) commended the passengers on board the plane, as well as the crew, for being calm

Layla (pictured) said she thought she heard something but wasn’t sure. Passengers who got off the plane said they were unaware of the incident.

An English woman praised the passengers on board the flight as well as the crew.

A male passenger said: “The fire engines were there and the pilot said ‘oh we have to park because we have an engine problem’ and then when it was inspected he said ‘oh no the engine has actually failed’.

“When they said we could turn our phones on, I turned my phone on and had 18 missed calls from my wife asking if I had landed.”

After its safe landing, Qantas said the mayday had been downgraded to “assistance may be needed”.

A statement said: “Qantas Flight 144, a 737 flying from Auckland to Sydney, had a problem with one of its engines about an hour from its destination.

“While originally issued as a Mayday, this has been downgraded to a PAN. The aircraft landed safely around 3.30pm and is now being inspected by our engineers.’

According to Airservices Australia, a mayday call is issued when a flight is in serious and imminent danger and requires immediate assistance.

Once the call is made, air traffic controllers alert rescue, firefighting and emergency services with details of how to respond. They also support pilots.

Just a day later, a Qantas flight from Sydney to Fiji was forced to turn back after experiencing a possible mechanical problem mid-flight.

An onboard display warned of the plane’s failure to land in Sydney just before 11am, while engineers later examined the Boeing 737 on the ground.

The flight was en route to Nadi Airport at around 9am when it turned around and landed back at Sydney Airport just before 11am.

“Engineers will study the plane. We thank our customers for their patience and are working to get them on their way to Fiji as soon as possible.’

https://www.dailymail.co.uk/news/article-11656609/Second-Qantas-plane-forced-turn-airlines-fourth-mid-air-diversions-three-days.html?ns_mchannel=rss&ns_campaign=1490&ito=1490 The second Qantas plane was forced to turn around in the airline’s fourth mid-air diversion in three days