An unknown singer spoke up on Spanish TV channel La Sexta (the Sixth) and claimed that Domingo asked to touch her in a theater in Spain in the early 2000s.

This comes three years after initial claims from alleged victims led to an apology and career cut for the Spanish-born “Three Tenors” singer, who has admitted no wrongdoing.

“One of the first things they tell you is don’t ride the elevator alone with Plácido Domingo,” the woman said. 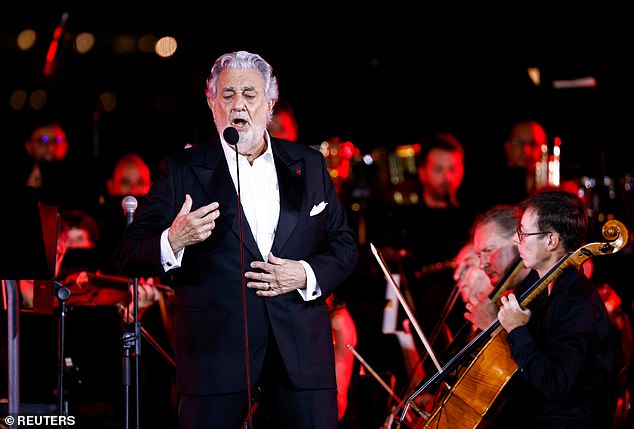 “The first time I felt uncomfortable was when we were rehearsing.

‘He [Plácido] told me in front of everyone, “Listen, can I put my hand in one of those nice bags of yours?”

“I was wearing pants with an embroidered back pocket,” she said.

“I had a bad stomach because I was like, ‘What can I say about that [Domingo] to carry on as normal?”

“If I say no, there will be consequences, and if I say yes, I don’t even want to think about it.”

The Spanish singer said she didn’t report Domingo as she feared he was “untouchable”.

Domingo is one of the most successful contemporary opera singers as a third of the three tenors active in the 1990s and 2000s with Luciano Pavarotti and José Carreras.

The Three Tenors’ first live album of 1990 became the best-selling classical album of all time.

In a 2020 investigation by the American Guild of Musical Artists (AGMA), more than three dozen singers, dancers, musicians, voice teachers and backstage staff said they witnessed or experienced inappropriate behavior by Domingo.

The investigation revealed that he behaved inappropriately.

After the investigation, some institutions decided to distance themselves from the opera singer, although Domingo expects to tour later this year.

No criminal case was brought to court over any of the claims.

In an interview with Spanish newspaper El Mundo in January 2022, Domingo denied molesting anyone and said he felt condemned in the court of public opinion for not speaking out.

The AGMA investigation is incomplete and has few concrete facts, he said.

Domingo returned to Spain to perform at a charity concert in June after almost a year and a half’s absence and has since performed in other countries.

Risk of Rain 2 Obelisk: How to Unlock Mercenaries