A 20-year-old Los Angeles student has revealed that an immune disorder has left her unable to enjoy the city’s kale-strewn menu.

Ms Gestetner says she is “disappointed” and “upset” that she can’t go out to restaurants with friends – but the good news is that grocery shopping only takes three minutes. 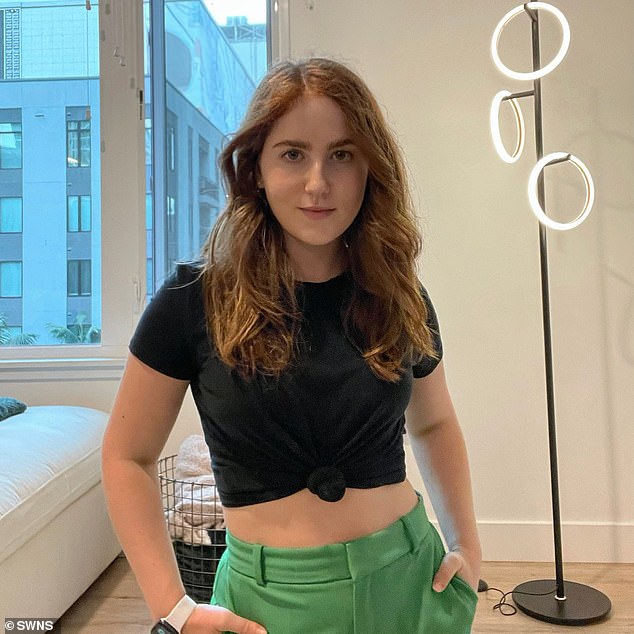 Jenna Gestetner, 20, a Los Angeles college student, is only allowed to eat eight foods because she has the immune disorder Mast Cell Activation Syndrome (MCAS).

She’s had several allergic reactions over the years, including severe stomach cramps and nausea. She is pictured above in the hospital undergoing tests that later confirmed the disease

MCAS is triggered by the body’s mast cells, a type of white blood cell found throughout the body, including in the skin, lungs, intestines and near blood vessels.

Patients with this condition see their cells misfire and begin attacking harmless substances mistaken for toxins.

Symptoms of the condition include hives, swelling, low blood pressure, difficulty breathing, and severe diarrhea after exposure to an allergen.

Treatment initially focuses on antihistamines and aspirin to relieve the immediate symptoms of allergy.

But doctors will then work with patients to determine what is causing the allergic reaction and what they can and cannot consume.

The cause of the condition is unknown, but doctors say it’s unlikely to be related to another illness or clear cause.

Pictured above, she is being tested to determine which substances she is and is not allergic to

Ms Gestetner said she had suffered from warning signs of MCAS since she was a child.

However, the condition was not diagnosed until March 2021 after urine and blood tests.

She said: “I was always the struggling kid and it always sounded like an excuse. Eventually I just stopped telling people that something was wrong.

“My parents knew about my struggles but they didn’t know all the details – when they found out I was diagnosed they were shocked.

She added, “I’m very lucky to have my family supporting me and helping me get the support I need.”

Prior to the diagnosis, she had tried eating several different types of foods but suffered from reactions to them.

Asked about Life Now, she said it was a “mixed experience”.

Due to the diet, she needs to eat six times a day to ensure she is getting enough nutrients.

She is also currently unable to try anything new or visit restaurants with friends.

Ms Gestetener admitted that in her apartment she keeps a cupboard full of snacks, including candy, popcorn, fries, sauces and condiments, which she rolls out for friends when they come over.

She said: “Over the years I’ve gotten a lot more used to how I have to eat.

“Food is social, so I often feel left out when I can’t eat with my friends, but I’ve found my own ways of being included, whether that’s by bringing my own food or before I go out.”

Ms. Gestetner now wants to stabilize her mast cells with medication so that she can enjoy more food.

She is a full-time student at the University of Southern California studying Arts, Technology and the Business of Innovation.

Explaining why she opened up about her condition, she said, “Diet is only part of health, and health is subjective.

“I want to be able to make other people feel validated. There’s so much online about being healthy, but what’s good for one isn’t always good for another.

“Having a chronic illness doesn’t always mean you have a medical device or life-threatening allergic reactions; People have invisible illnesses that you wouldn’t know about from the outside.

“Those who have these challenges can still lead normal lives – there are just additional things to consider when traveling or even leaving home.

“It’s about living your life to the fullest within the parameters of your own health. I’m just trying to figure out what being healthy means to me.”

Scientists initially believed MCAS to be a rare condition, but as awareness grows, more and more people are being diagnosed with the disease.

According to estimates by a Canadian health service, about 14 to 17 percent of people could have the disease.

Mast cell activation disorder is the umbrella term for a spectrum of diseases caused by the inappropriate activation or accumulation of mast cells in body tissues.

Mast cells are produced in the bone marrow and are an important part of the immune system and help fight infection.

When mast cells recognize an allergen, they release histamine and other chemicals into the bloodstream. Histamine causes blood vessels to dilate and the surrounding skin to become itchy and swollen.

This can cause the skin to become red, swollen, and itchy, and it can also cause mucus to build up in the airways, which narrow.

People with this condition are at increased risk of a serious and life-threatening allergic reaction called anaphylaxis.

Symptoms include itchy skin or a raised, red rash, feeling light-headed or fainting, and swelling of the throat, mouth, and tongue, which can make it difficult to breathe.

https://www.dailymail.co.uk/health/article-11659515/This-woman-eat-eight-foods-immune-condition.html?ns_mchannel=rss&ns_campaign=1490&ito=1490 This woman can only eat eight foods because of her immune deficiency

Liverpool 0-0 Chelsea: Honors even at Anfield stalemate as Kai Havertz is disallowed for an early goal