Thousands flooded the streets of Brooklyn for the city’s 55th annual West Indian J’Ouvert Parade on Monday in celebration of the cultural event for the first time since the pandemic.

J’Ouvert is a Caribbean carnival that signifies a tradition started by freed slaves after emancipation. Parade-goers dressed up in Caribbean garb while waving flags of their homeland.

This year’s theme dubbed, ‘Rejuvenate Breaking the Chain and Embracing the Movement,’ featured the J’ouvert Festival on the streets of Brooklyn at 6am with thousands decked out in costumes while drums roared in the background in the early morning. Festivities are expected until 6pm ending with the West Indian Day Parade.

‘New York City is back and J’Ouvert celebrations are back better than ever,’ NY Mayor Adams said in a video celebrating the return of the event.

‘As we dance our way down the parade route, we do so in a renewed spirit of unity, resilience, and togetherness.’

Adams made an afternoon appearance along the parade route while drawing the attention of multiple participants.

Meanwhile, New York Police Department were seen throughout the streets as officer presence is set to remain high for the remainder of the day.

‘Officers are working out along the route to ensure a safe celebration for all,’ NYPD wrote on Twitter.

Parade-goers were lively ahead of the celebrations while dancing in the street. One officer was seen being danced on by a cheerful woman. 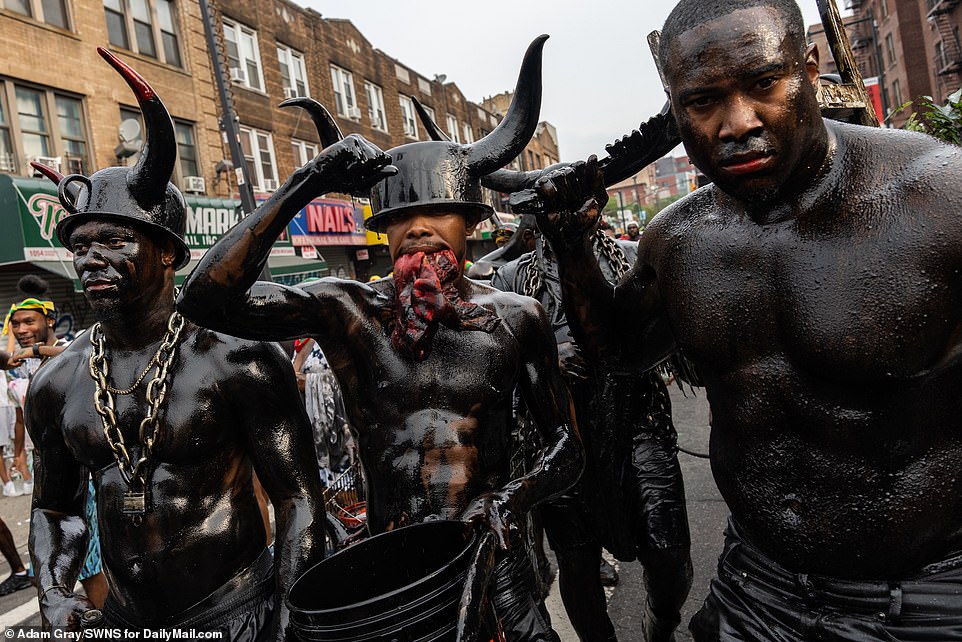 Some participants covered themselves in black paint

Multiple people dancing on and with one another. A few participants are seen dancing while the crowd admires from a distance

NY Mayor Eric Adams joined in on the festivities. Adams was seen along the parade route on Monday afternoon

Officers prepared for the festival on Sunday by barricading the streets

The crowds flocked to the Grand Army Plaza before dawn as multiple roads were set to be closed throughout Brooklyn for the festivities.

About 13 entry points were set up for participants to be screened for weapons and alcohol.

The early morning crowd appeared to be jolly ahead the full day. Flags representing the Caribbean were seen all around as participants entered the streets with pride of their homeland.

Some participants helped others get into the spirit of the day by tossing around buckets of paint and powder. As many energetically danced at sunrise, several parade-goers were seen getting paint splattered onto their bottoms while they bent over and danced.

Multiple parade participants walked through the street and danced on one another while covered in black paint and white foam, which resembled shaving cream.

Participants were seen climbing on top of parade floats waiting for the festivities to begin while others smiled in glee.

Participants danced in the streets while others watched

The crowds were being covered in powder and liquid

Hundreds of people flocked to the streets before sunrise

Many participants headed to the streets before sunrise

Two women were seen sporting the flags of their homeland

Participants showed off their attire they have been planning for the festival. Cotton, lace, tulle, and colorful flowers are historical stable pieces in the Caribbean.

One group of women wore tulle dresses with white bows and head wraps. Their outfits were accessorized by what appeared to be multiple layers of a pearl necklace and colorful flowers attached to their dresses.

Others wore flags representing their home in the Caribbean while some carried chains around their necks.

Seamstresses prepared weeks for the event and spent time before the festival perfecting their attire.

Marilyn Gaymes, a seamstress from the Trinidad helped put together Afro-Brazilian inspired outfits for more than 100 people.

Meanwhile, Ebony Jewels wore her attire on Monday for the first time.

‘I’m just going to be one of the masqueraders,’ Jewels told CBS News. ‘My top is a crop top that matches this with lots of pearls, lots of while and a nice beautiful flower headpiece.’

Some seamstresses prepared a year for their costumes.

‘It takes some time to source the material and research,’ Kandell Julien told CBS News.

A group of women showed off their attire that included tulle dresses with white bows and head wraps. Their outfits were complemented by pearl-like necklaces and colorful flowers

A group of women smiled nearby two police officers

A participant in a gold colored wig, layers of necklaces and a backseat filled with colorful flowers smiled while heading toward the crowd

Many laughed and danced amid the festivites

Two people are seen dancing on a police baricade

Covered head to toe, another participants holds a bucket of white paint as others are covered with it

The Indian Delta variant forced the city to cancel the official festival for the second year in a row in 2021, but Brooklyn’s Caribbean community staged its own unofficial party.

Hundreds of Brooklynites joined in the fun last year while decked out in similar attire.

The streets of the Crown Heights and Flatbush neighborhoods filled up with people eating and drinking at barbecues and parties, carrying the flags of their countries, dousing one another with paint, and walking or dancing along with family and friends until daylight.

A contingent of NYPD officers were also present.

Another man wore a construction hat with a dump truck while covered in black paint. He held another object in his mouth

One man wore a viking hat while chains hung from around his neck. He held an old-fashioned phone that he talked through

Many people dancing throughout the street as police observed nearby

‘The NYPD Band is leading the way in today’s West Indian Day Parade,’ the department wrote in a Tweet.

https://www.dailymail.co.uk/news/article-11182039/NYPD-sends-cops-force-thousands-line-streets-West-Indian-JOuvert-parade.html?ns_mchannel=rss&ns_campaign=1490&ito=1490 Thousands of New Yorkers flock to the streets of Brooklyn for the West Indian J’Ouvert parade