By Keith Griffith for Dailymail.com

At least three people were injured in a fire and explosion at a Phillips 66 fuel storage facility in north Texas on Tuesday.

The incident happened around 10:15 a.m. local time at a fuel depot off Highway 136 north of Borger in the Texas Panhandle, officials with Phillips 66 and the Hutchinson County Office of Emergency Management said.

Footage shared by local newspaper The Eagle Press showed a huge column of dark black smoke rising from the site of the blast.

A correspondent for the outlet said he heard the sound of two explosions at the Borger gas station, about three miles south of the camp. 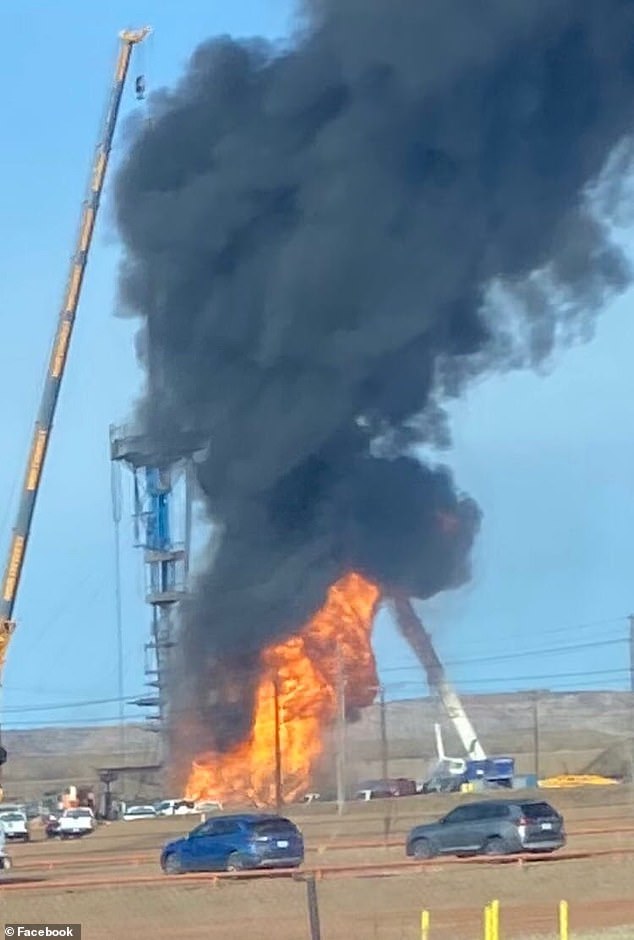 The Hutchinson County Sheriff’s Office issued an emergency alert, describing the fire as a “major incident” and closing traffic on Highway 136 between Borger and Stinnett.

“The cause of the incident is being investigated,” a spokeswoman for Phillips 66 told DailyMail.com in a statement.

“Emergency personnel and the Borger Fire Department have been notified immediately and are working to bring the fire under control,” the statement added.

“Currently we can confirm that three people have been injured and are receiving medical attention.”

“The safety of our employees, community and the environment are of paramount importance to our business and these priorities will guide our efforts as we respond to the incident,” the company added.

Borger is a town of about 12,500 people and is about 50 miles northeast of Amarillo.

The incident happened at a facility known as Johnson Tank Farm, which is connected to the nearby Phillips 66 Borger refinery, a complex that spans 6,000 acres and employs about 920 workers.

The refinery primarily processes mid-sour crude oil and natural gas liquids shipped via pipelines from West Texas, the Texas Panhandle and Canada, according to its website.

Its throughput is up to 50,000 barrels of gasoline per day.

West Texas Intermediate crude prices were little changed after the incident, up 0.13 percent as of 1 p.m. ET.

https://www.dailymail.co.uk/news/article-11645553/Three-people-injured-major-fire-fuel-storage-facility-northern-Texas.html?ns_mchannel=rss&ns_campaign=1490&ito=1490 Three people were injured in a major fire at a fuel storage facility in north Texas