TJ Holmes beamed as he pressed two cellphones to his ears in Manhattan on Friday – a day after his affair with a 24-year-old intern was exposed.

Holmes, whose future on Good Morning America is in jeopardy after news broke of his relationship with co-host Amy Robach, grinned as he strolled the streets.

He was wearing an Atlanta Braves cap, clutching a phone to his ear and holding another in the palm of his hand.

Holmes is currently in the midst of a firestorm and his wife, with whom he was 12, has divorced him amid the revelations. 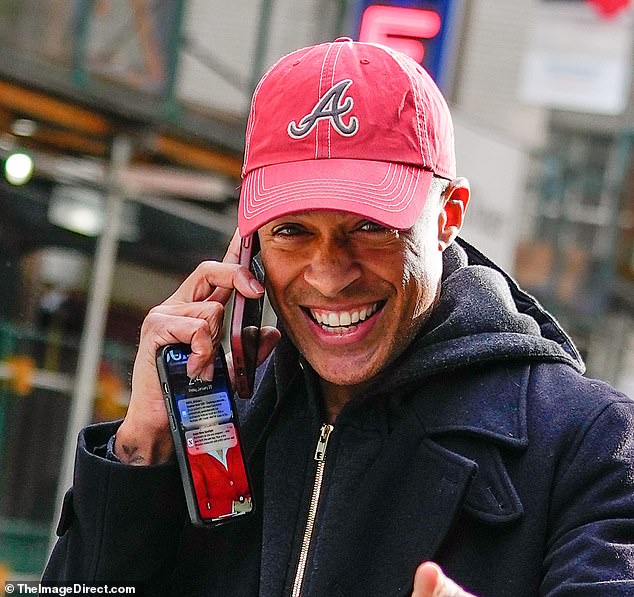 Holmes, father of three, was wrapped up in a hoodie and coat, with sweatpants and flashy sneakers against the New York winter weather

Holmes beamed and gestured to waiting photographers in Manhattan on Friday

On Thursday, a well-placed source spoke to DailyMail.com about his affair with then 24-year-old Jasmine Pettaway.

The affair took place in 2015, when Holmes had been married to his now-estranged wife, Marilee Fiebig, for five years.

The source, who knew Pettaway well at the time, said: “He was a predator who took full advantage of his position and he was ruthless.

“It was Jasmin’s first real job in television and it was a big deal for her.

“She was looking for a mentor and reached out to several people.

“TJ was someone who was approachable, but he absolutely abused the trust.”

Jasmine Pettaway (pictured) was 24 at the time of the affair in 2015 and the sexual relationship left the young clerk “confused”.

Pettaway (pictured) and Holmes’ sexual relationship lasted several months and involved him visiting her at her apartment beforehand, the source said, “it fizzled out”.

At the time, Pettaway and Holmes, who joined the ABC News team in September 2014, often worked the same shifts.

The source said: “Holmes was someone who used to get drinks and he and Jasmine started it. You have to keep in mind that he was a correspondent at the time and takes time to talk to her about work or whatever.

“I don’t know how long this was before it turned sexual, but I do know it was the first time it was in his office and he was due to go on the air in a few hours.”

The source said Pettaway later told them Holmes called her into his office – where she saw him drinking alcohol.

“It’s like a shift in atmosphere, almost an expectation that something is going to happen and it happened.

“They had sex and I know she was confused afterwards as to what that meant. That kind of “did that really just happen?” Feeling. I mean, that’s pretty risky behavior on his part.”

They said: “He just didn’t seem to care. You know he’s wearing his ring. He’s got a wife, he’s got a relatively high-profile job, but he didn’t act like he was concerned about either of those things at the time.

Pettaway and Holmes’ sexual relationship lasted several months and included him visiting her at her apartment before, according to the source, “it fizzled out.”

The source said that Holmes didn’t seem to care that he was married or that he might risk his job by having multiple affairs with women on the network. He and Marilee Fiebig (pictured) married in 2010

“This was a young woman starting out in a tough industry looking for role models and mentors, and she got TJ,” the source said. “Back then nobody talked about abuse of power, but a lot happened.” Pettaway is pictured

Pettaway later became a segment producer for GMA, staying with ABC in New York for two years before returning to her hometown of Cleveland in late 2016, where she joined the network’s local affiliate.

Today she is an award-winning casting producer for ITV America, married and the founder of women’s digital lifestyle brand, Lemon-Love.

In an online interview with Voyage Ohio in 2021, she reflected on her departure from New York, saying it was due to a “mixture of insecurity, loneliness and a bit of naivety.”

She also admitted that ABC’s “toxic work environment has really damaged my self-esteem.”

DailyMail.com was told that Pettaway wasn’t the only female subordinate Holmes put the reins on, as multiple sources say a young network intern described herself as “stressed out” and “freaked out” by his unwanted advances.

According to the source: “It was him. Did he ever want to be professional when it came to jasmine or just spoil the fruit he got? I do not know. All I know is that he was always trying to be the bragging guy.

“He didn’t seem to care that he was married or that he might risk his job.”

How to unlock the Miss Fortune item in League of Legends